Written by Art Williams, Photographs by Will van Overbeek | From the June 2017 issue | Updated: November 20, 2018 | Filed Under: Hiking + BikingThings to DoTRAVEL 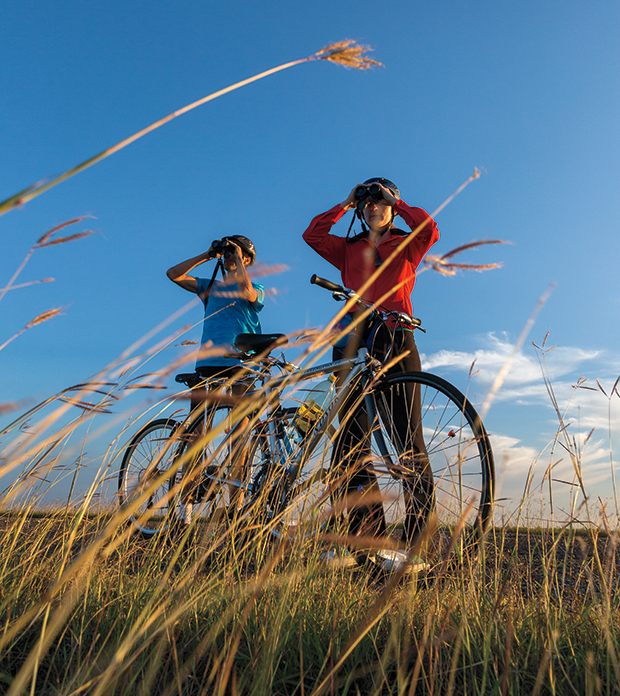 Not a half-hour into my daylong adventure, in the middle of a prairie of sea lavender and leatherleaf, I stopped my bike in wonder. A few dozen yards from the pavement, dozens of sandhill cranes comingled with a flock of ivory snow geese, completely ignoring my entrance into this unspoiled coastal scene.

Laguna Atascosa NWR offers habitat and bird tours in the fall and winter.

Ocelot Conservation Day is held annually on the first Saturday of March.

I had hoped for such moments when I decided to explore Laguna Atascosa National Wildlife Refuge by bicycle. Maybe the famous avian residents—and even its mammals—wouldn’t notice me like they would if I arrived in a noisy car? At the same time, I could pedal to some of the refuge’s more far-flung attractions—and there was a lot of ground to cover.

At 97,000 acres, Laguna Atascosa is by far the largest preserved patch of wilderness in the Rio Grande Valley. While most visitors tour the refuge by car and hiking trails, its size alone makes it an ideal destination for cyclists. Altogether, the refuge has 75 miles of trails open to bikes with surfaces ranging from pavement to gravel and dirt.

“You can do as much or as little as you want, and plan different trips,” Park Ranger Marion Mason told me when I first arrived at the Visitor Center. She’d handed me a well-marked trail map and suggested a variety of different loops. “There are so many options, which is what makes it great.”

Laguna Atascosa’s setting along Texas’ southern Gulf Coast makes it an unrivaled place for seeing wildlife. The refuge has recorded sightings of 417 bird species here, the most of any national wildlife refuge in the country. The refuge is also one of the only places nationwide where you might catch a glimpse of an endangered ocelot, often known as “little leopards” on account of their spots.

“Ninety-five percent of the Valley’s native habitat is gone,” Mason said. “This is the biggest piece that’s left, and that’s why we can still have populations of ocelots and cougars and some of the bigger animals that once roamed throughout the Valley.” While the ocelot population remains in grave danger, biologists found a welcome surprise in April 2016: a den containing a three-month-old kitten, the refuge’s first discovery of a den in over 20 years.

Talking with Mason had left me eager to hit the trails, but she also cautioned that it was important to be prepared for the elements, perhaps inferring from my jeans and button-up shirt that I wasn’t the world’s most experienced off-road cyclist.

“You have to think about conditions and plan accordingly,” she said, reminding me to carry lots of water and a tube patch kit in case a South Texas thorn punctured one of my tires. Mason also warned me about the strong southeasterly wind I was likely to encounter on my way to catch a view of the Laguna Madre coast.

On the first leg of my tour, thorny thickets of ebony and granjeno shield-ed me from the wind as I watched for the reclusive ocelot (although they’re usually seen only at dawn and dusk). By the time the forest opened up into prairie, where my jaw dropped in amazement at all the birds, Mason’s admonition was long forgotten.

Then, a wall of wind slammed against me, sending me stumbling backward. The cranes and geese took flight in a magnificent chorus of honking and the whoosh of beating wings. I pedaled as furiously as I could, only to feel as though I were on an exercise bike, wheels spinning but not actually going anywhere. Nature’s reminder: Nothing worthwhile comes without effort.

But, oh, was it worth it. Nearly four miles later, just when I thought I couldn’t pedal another instant, I ascended a hill, turned a corner, and found a new landscape of surreal and awesome beauty. From a wooden overlook called Plover Point, the Laguna Madre stretched for miles in either direction. Distant egrets and herons fished in ankle-deep water—the Laguna’s average depth is only a meter—producing an optical illusion that made them appear supernaturally tall. Overhead, a bright pink flash heralded the passing of a roseate spoonbill. On land, curvy Spanish dagger yucca dotted miles of dunes, resembling the bright-colored tufts of the Truffula trees in Dr. Seuss’ The Lorax.

As I sat at the overlook and enjoyed the sandwich I’d packed for lunch, a huge buck, antlers held high, meandered onto the beach. He foraged in the sand while I enjoyed the serenity of birdsong and waves lapping onto the shore. Biking isn’t the only way to enjoy the waterfront: The refuge also periodically offers guided kayak tours, and anglers and campers can head to the lighted piers and boat launch at Adolph Thomae Jr. County Park, located within the refuge.

The wind now at my back, I zipped through a six-mile jaunt to reach the refuge’s many inland lakes. These freshwater oases are vital for migratory songbirds that stop over to rest and refuel before continuing along their transcontinental journeys. The lakes also host hundreds of thousands of ducks during the winter. Cycling along the shores of the 5,000-acre Laguna Atascosa, I saw hundreds of aptly named redheads bobbing on its surface.

I completed my last loop, proudly calculating that I’d covered nearly 25 miles, and prepared to head back to the Visitor Center on the main road. But before I called it a day, I stopped at one last overlook. An osprey swooped overhead while a tricolored heron foraged for lunch among a crowd of coots. I was suddenly aware of the presence of an unfamiliar quiet—the sublime silence of no traffic at all. I lingered a few minutes longer, feeling grateful that wild places like this still exist, where it’s truly possible to get away from it all, in the company of so many feathered friends.