History and recreation along the Gulf of Mexico 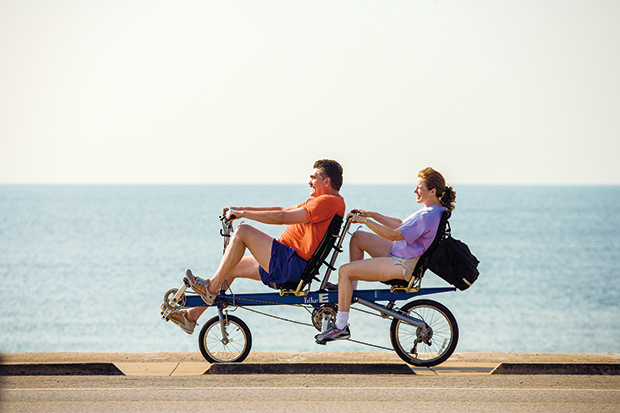 Galveston’s Seawall Boulevard stretches for more than 10 miles along the Gulf of Mexico, offering access to hotels, resorts, restaurants, and attractions, as well as beaches for swimming, stand-up paddleboarding, kite-flying, boogie-boarding, and other activities. Between the road and the waves, a sidewalk known as the Seawall Urban Park is the country’s longest continuous sidewalk; it’s a great place for walking, jogging, bicycling, and people-watching.

Visit Galveston.com for more information on Seawall Boulevard and Galveston.

Construction of the Seawall itself began in 1902 in response to the Great Storm of 1900, a Category 4 hurricane that killed at least 6,000 people and signaled the end of Galveston’s reign as Texas’ preeminent port city. To protect the island from future hurricanes, engineers designed a behemoth concrete barrier between the sea and the island, and they also commenced a complicated grade-raising project that eventually lifted about 500 city blocks. Together, these projects were recognized by the American Society of Engineers as one of the most brilliant feats of civil engineering in the history of the nation.

A drive or stroll along the Seawall is a rewarding introduction to Galveston Island. For starters, a historical marker at 21st and Seawall designates the site of the famous gambling hot-spot the Balinese Room, a mini-museum in the basement of the 1911 Hotel Galvez chronicles the island’s tourism history, and the Pleasure Pier carries on the tradition of a long-gone amusement park that thrilled visitors in the 1940s. And a new, 15-block stretch of beach called Babe’s Beach offers plenty of sand for sunbathing, shell-seeking, swimming, and other watersports.