There’s Nothing but a Beach on St. Jo Island, but What More Do You Need?

Written by Art Williams, Photographs by Will van Overbeek | From the June 2018 issue | Updated: May 21, 2019 | Filed Under: CoastFamily Travel 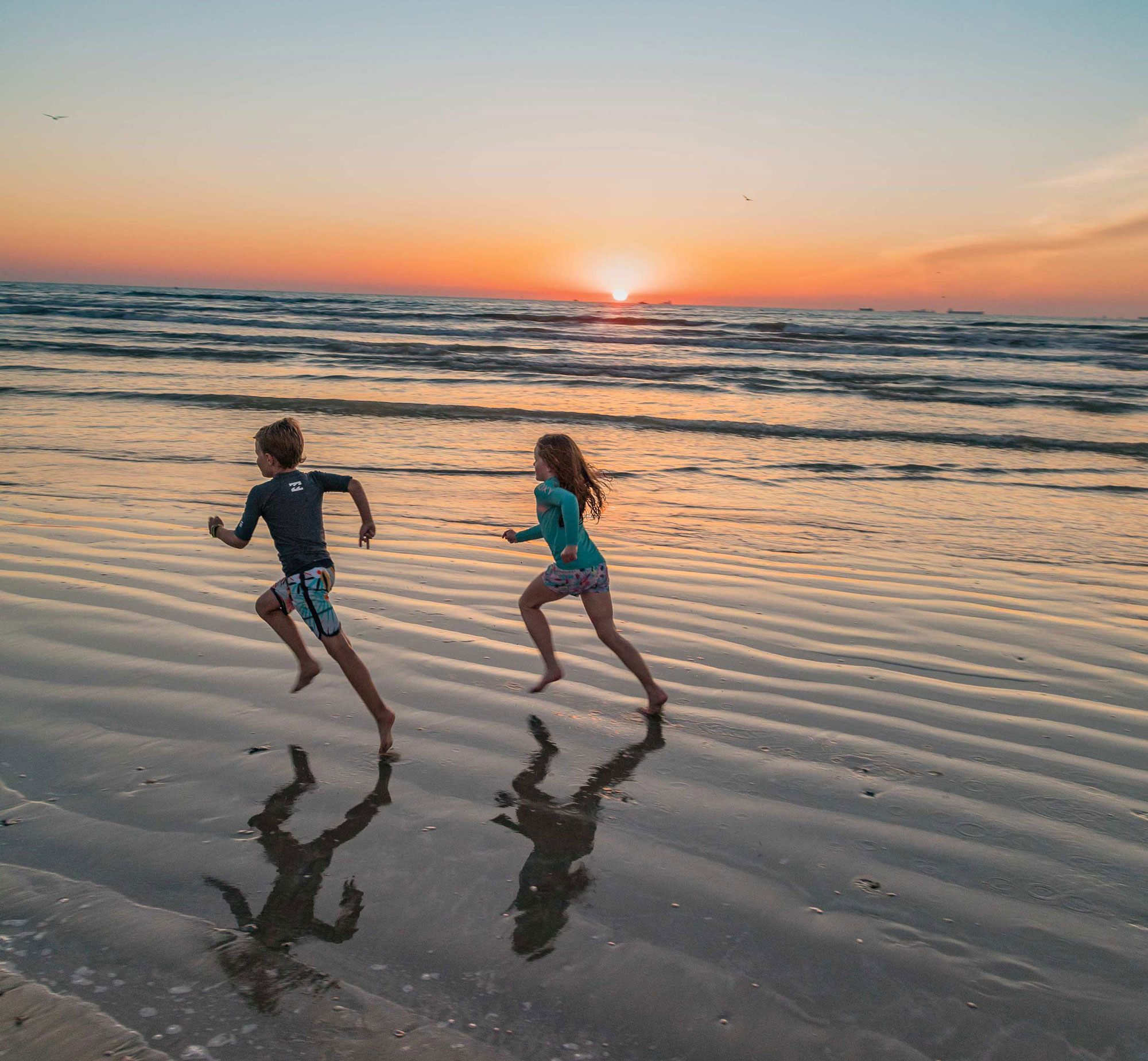 When Hurricane Harvey struck in 2017, it made landfall on San José Island, a coastal retreat where U.S. presidents have come to fish and fundraise, and everything but a broad and empty beach is owned by a family of billionaires.

San José Island sits across Matagorda Bay from Rockport.
Cut off from Port Aransas by the Aransas Pass ship channel, the barrier island is privately owned and closed to the public except for the beach.
For $12 a passenger ($6 for children), Jetty Boat provides roundtrip ferry service to the island from Fisherman’s Wharf in Port Aransas, typically offering 10 trips a day from about 6:30 a.m. to 6 p.m.
Call 361-749-5448 or 361-749-5760.

For half a century, Jetty Boat has ferried passengers from Port Aransas, on the northern tip of Mustang Island, across Aransas Pass to St. Jo. Little more than grassy dunes and sandy beaches, the 21-mile-long strip of land shelters Aransas Bay from the tides of the Gulf of Mexico and ranges from about two-thirds of a mile wide at its southern end to nearly 5 miles across at the top. People seek out St. Jo for the fishing, beach-combing, surfing, swimming, and solitude. “The best way to describe it is if, in the summertime, we’ve got 20,000 people on the beach in Port Aransas, we’ll have 200 on the beach on St. Jo, and that’s high,” said Bill Cofield, a Jetty Boat captain. “Most of the time we’ll have less than a hundred.”

For several months in 2017, however, almost no one visited the St. Jo beach. The hurricane inflicted catastrophic damage on Port Aransas and nearby Rockport, and while there was not much to destroy on St. Jo, the storm knocked loose a massive drillship from a smaller island within the bay. The ship ping-ponged down Aransas Pass, wiping out the wooden dock where Jetty Boat unloaded its passengers on St. Jo.

It took about five months to build a new dock, but Jetty Boat reopened in mid-January 2018 to a long line of customers eager to see how the storm had reshaped the island and what curiosities may have washed ashore. They found that Harvey had flattened many of the tallest dunes; it widened the beach in some places but gashed the shoreline in others. Inland from the beach, a few oil barges as long as football fields lay marooned among the sea oats and salt grass.

The barges, like most of the island, are off limits to the public. People can legally explore as much of the St. Jo shoreline as they wish, so long as they stay on the beach and don’t wander onto the dunes, which are owned by the heirs of Sid Richardson, the rags-to-riches wildcatter who grew up in Athens and struck black gold in West Texas in the 1930s. Richardson purchased St. Jo in 1936 for $25,000, equivalent to nearly $450,000 today, and started a cattle ranch on the island. He also hired one of the Southwest’s leading architects, O’Neil Ford, to design a lavish hunting lodge and enlisted his nephew, Perry Bass, a recent Yale graduate with an engineering degree, to build it.

The ferry to St. Jo Island is running again after months of rebuilding from Hurricane Harvey.

“When Sid bought it, St. Jo was a seldom-used sheep farm,” said Bryan Burrough, an author who wrote about Richardson in his book The Big Rich: The Rise and Fall of the Great Texas Oil Fortunes. “This is just a strip of island with beautiful beaches and nothing else but dunes and rattlesnakes. And Sid not only wanted to put a house there; he wanted to put an ultramodern, beautiful home there.”

As Richardson’s fortune grew, he turned to St. Jo when entertaining some of the most powerful politicians in Texas and the United States, from Presidents Franklin D. Roosevelt and Dwight D. Eisenhower to Lyndon B. Johnson, who famously received campaign contributions from Richardson via paper bags loaded with cash. After Richardson’s death in 1959, his nephew took ownership of the island, and it is still held by the Bass family of Fort Worth, whose philanthropic contributions include a performance hall in Fort Worth and concert hall in Austin, both bearing the family name.

Richardson built his island home with a stately, curving staircase and plenty of concrete to withstand the worst of Texas weather, and it has done just that. In a prepared statement, the security director for the Bass family said the property needed some repairs following the hurricane, but no one had suffered injuries when Harvey roared over the top of the island. The home is quite striking, Burrough said. “And what’s more striking is almost nobody’s ever seen it, because from the ’30s to today, it’s a private home,” he said. “To my mind, it’s got to be one of the most notable homes in Texas, … this beautiful thing we all know is out there but so few of us will ever see.”

You can’t see the mansion from the beach, but the Jetty Boat passengers on a recent morning had different plans for their excursion anyway. After a 10-minute ferry ride across the pass, Tommy Parson Sr., a retiree from Minnesota, found a fishing spot on a rock jetty that extends three-quarters of a mile into the Gulf of Mexico. He used an unusual kind of live bait foraged from the jetty rocks, although he wouldn’t say what: “I don’t mean to be selfish,” he said, but the supply is limited. By the end of his outing, Parson had hooked his daily limit of five sheepshead, whose mild flesh reminds him of the fish he eats back home in the Midwest.

At day’s end, “either be there at the dock, or be a happy camper” under the stars on a St. Jo beach.

“The winter Texans, the walleye crowd, if you will, we prefer sheepshead for the table over the redfish,” which many native Texans consider the best eating, he said. Heavy, white fog had obscured the ocean view, but the anglers seemed too busy to notice as they reeled in plenty of trout, redfish, and drum on the jetty, which protects the ship channel from filling up with silt and has stood for more than a century.

When the fog burned off around midday, the welcome clarity revealed boundless ocean and beach. Two women were hard at work gathering sea shells, which they use to fashion jewelry and artwork. Rebecca Wilhite, a jewelry maker and sculptor from Waco, said she’s been coming to the island for more than a decade. “Every time you go out to St. Jo, it’s a different beach,” she said. “Because of the currents as the waves come in, it brings in new sand, new shells, new stuff, and depending on the tide it can either be rebuilding the beach or taking it away.” (She also keeps an eye out for the trash that frequently washes ashore.)

Wilhite and her friend loaded a red wagon with conches, clam shells, bird skulls, and the bones of sail catfish, which resemble crucifixes. They made their way back to the dock, where Jetty Boat runs several times throughout the day. Before long, Captain Bill arrived to ferry them back to civilization.

“It runs like a bus system,” Cofield explained. “We take people over, and some will fish for a couple of hours and come back, but some people will stay all day, and some will camp. When we sell them a ticket, it’s for the ride over and the ride back, whether it’s one day or two days or three days, it doesn’t make any difference.”

The day’s final return leaves at 6 p.m. “We tell everybody that’s the last trip of the day and to either be there at the dock, or be a happy camper.”

There could be worse fates.