From Galveston to South Padre Island, the coast is a winter surfer’s dream

Written by Art Williams, Photographs by Kenny Braun | From the December 2018 issue | Updated: January 19, 2019 | Filed Under: CoastOn the WaterThings to Do 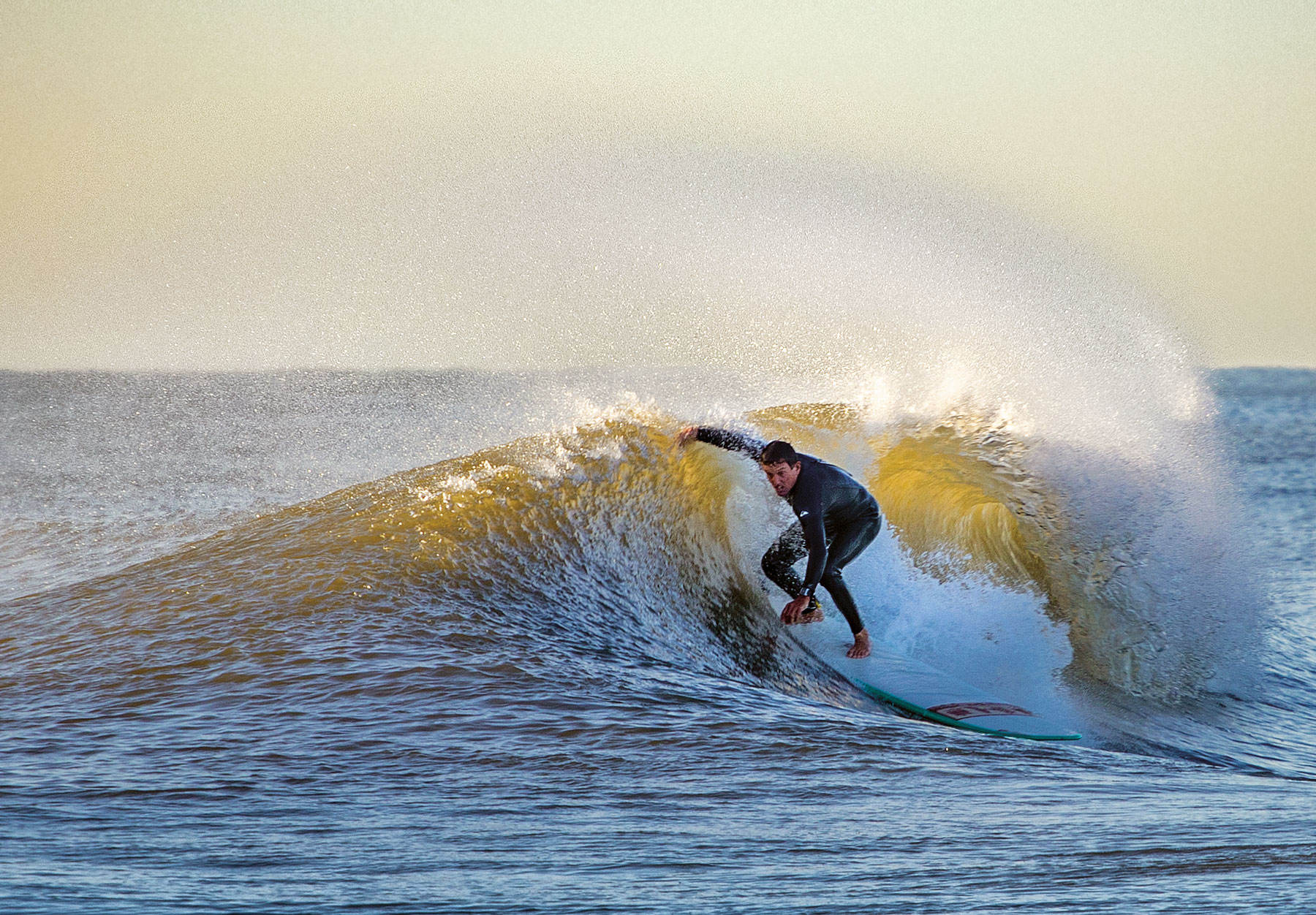 People who visit the coast during the summer may think there’s no surf in Texas, but that’s because they haven’t seen the waves of winter.

In late January through mid-February, storm-driven northerlies blow across the Gulf of Mexico, roiling the placid surf into choppy waves that can build to heights of 5 feet and taller. Offshore winds then polish these waves to produce smooth, jade-colored swells that build then break, curling in a clean line, row after row. For those willing to brave the chill, there are plenty of destinations along the 367 miles of the Texas coast to give off-season surfing a try.

“Most people are fair-weather surfers,” says James Fulbright, proprietor of Strictly Hardcore Surf Specialties in Galveston. “There are 70 percent fewer surfers in the water in winter.”

As a surfer with more enthusiasm than expertise, I find the big waves and sparse crowds of winter to be the perfect opportunity to practice my skills on the Texas coast. When conditions are right, no matter the temperature, the waves draw me to the beach just as strongly as its refreshing waters in the hot summer. And for those few brief moments that I catch a wave, it feels like I’m riding on top of the world. It’s addictive. Just ask the surfers who venture time and again into the waves, regardless of the season. 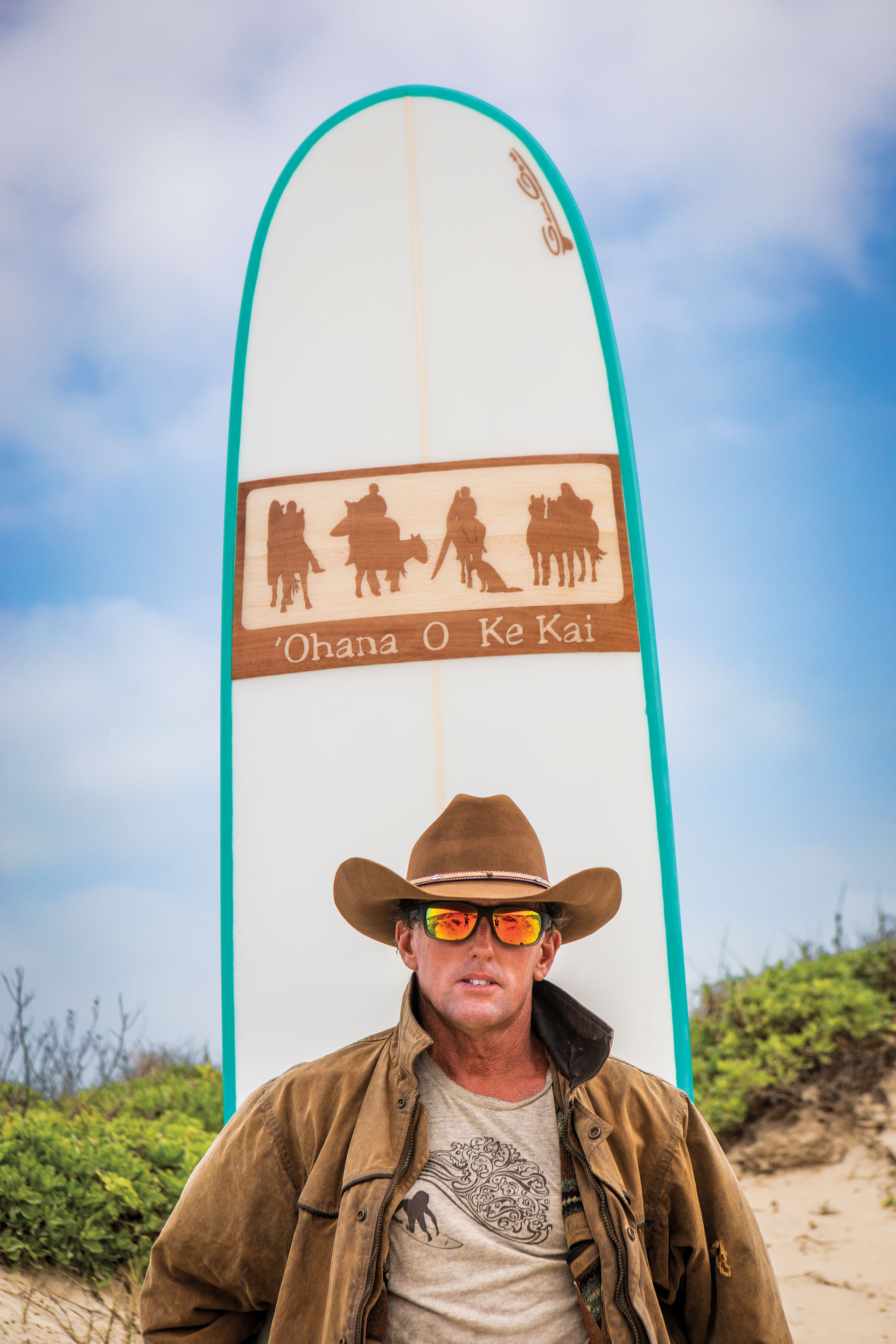 The Tip of Texas

Peter Davis, chief of the Galveston Island Beach Patrol, has been surfing Texas waters for more than 40 years. He often surfs on his home turf, but South Padre Island is his favorite destination. “The best surf spot in Texas is Isla Blanca Park at the south end of the island,” he says, noting the waves are “pretty consistently big, beautiful, and well-formed.”

Surf instructor Gene Gore, who owns and operates South Padre Surf Company with his wife, Rachel, agrees. “Isla Blanca is by far the best surf on the coast,” he says. “It’s just magical. The way it’s situated in the Gulf, it picks up any swell direction. If you catch South Padre Island on a really good day, you’ll see why I love it here more than Hawaii. We have here what every surfer dreams of: no crowds, warm water, and good waves.”

With Gulf Coast water temperatures in the 50s and 60s during the winter, surfers rely on wetsuits to make surfing possible. Shops up and down the Texas coast rent wetsuit gear as well as surfboards and other necessities.

Although visitors swarm South Padre Island from spring break through summer and into fall, its beaches are practically vacant during the colder months. Even so, the water temperature in winter averages 60 degrees, significantly warmer than the seas off California and most of the East Coast during the same time of year. As a result, Gore gives surf lessons year-round.

The continental shelf is less shallow toward the southern tip of Texas, resulting in bigger wave formations, he says. Coupled with winter storms, that makes for perfect conditions. “A front will hit,” he says, “and it will be crazy windy for a day or so. The waves will be building, and then, when the front passes and the wind turns offshore, it’s game on. There are no crowds, and it’s the biggest, best waves of the year.” 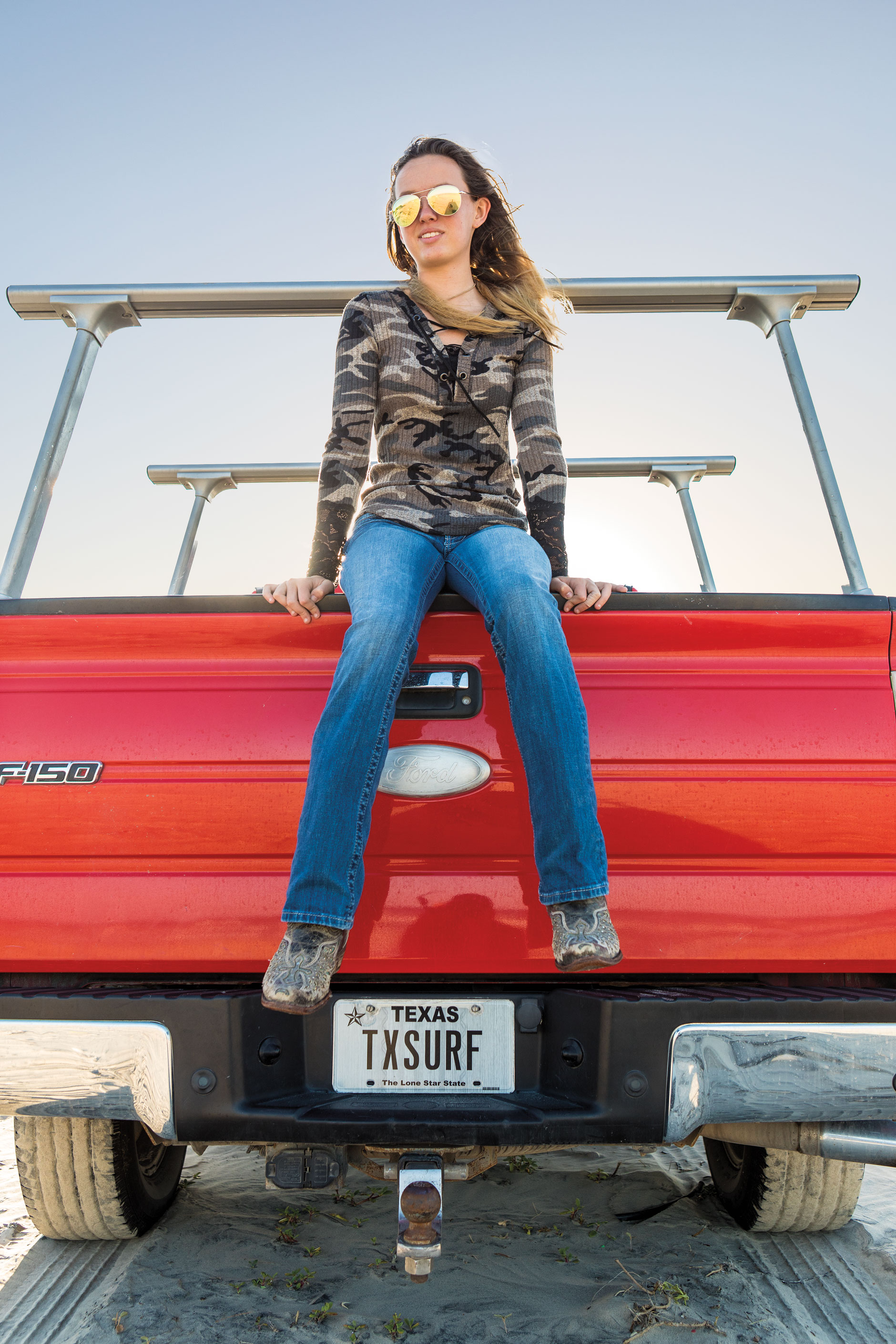 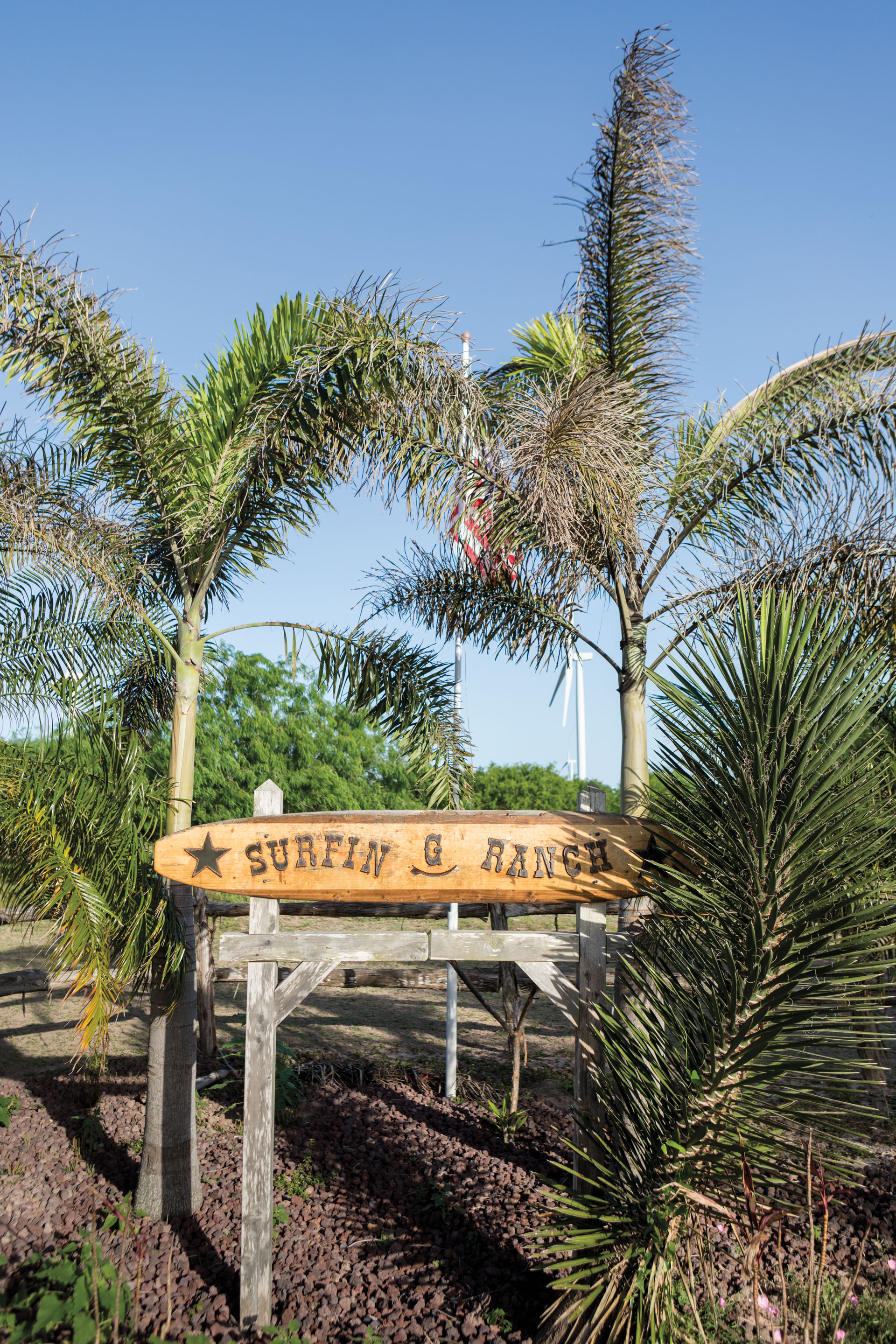 About 200 miles to the north of South Padre lies the next major surfing destination: the shoreline that connects Corpus Christi to neighboring Port Aransas.

In Corpus, Bob Hall Pier sometimes creates primo surf conditions. Structures like this one that protrude into the water develop sandbars, and when a swell encounters these underwater ridges, it pushes upward to form a wave. Popular for fishing, the Bob Hall Pier reaches 1,240 feet into the Gulf, generating a terrific break.

Davis says a number of other spots also produce good waves along this stretch of coastline, especially the North Packery Channel jetty and Horace Caldwell Pier at the entrance to Aransas Pass. 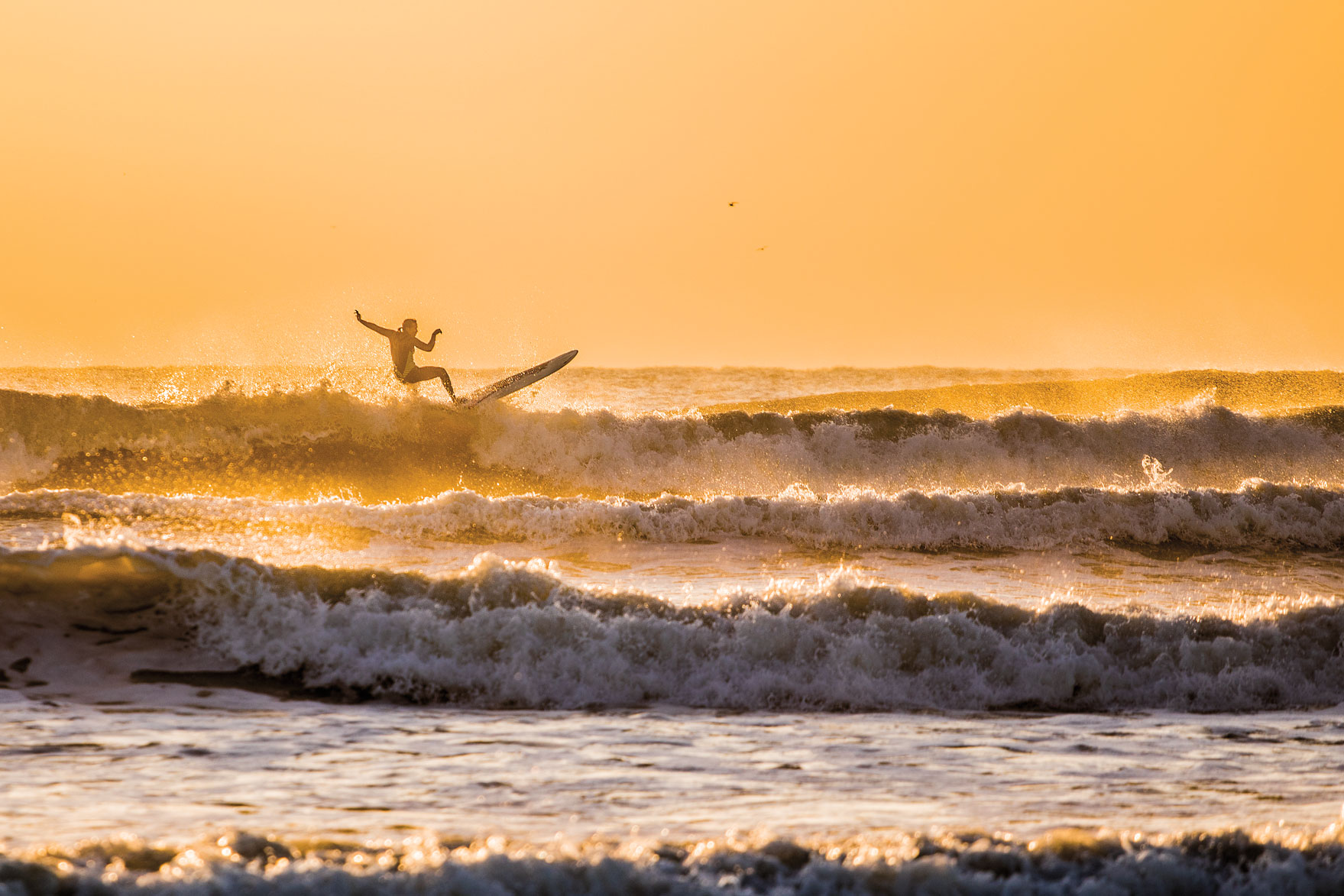 Farther up the coast, three jetties at the mouth of the Colorado River in Matagorda used to be popular places to catch waves, but in 2016, the county began enforcing a ban on swimming in the vicinity due to dangerous rip currents. Some intrepid surfers still venture to Matagorda’s more remote beaches, using off-road vehicles to explore the undeveloped shoreline and set up camp in the shelter of the dunes.

Keep an eye on the forecast to catch the best waves. Online sources such as magicseaweed.com predict waves around the world; closer to home, sites like Galveston’s g-townsurf.com post local reports and stream live surf-cam footage.

For beginners, the beaches of Quintana, Surfside, and Galveston are better places to start. There, the shallow continental shelf creates a gentler wave, and water temperatures hover in the 50s during winter—not as warm as South Padre Island, but still comfortable enough when clad in a full suit of thick neoprene.

Quintana and Surfside flank the channel leading into Freeport Harbor. Twin jetties jut into the Gulf on either side: a swell from the east produces waves in Quintana; a swell from the south brings them to Surfside instead. Southern swells are more prevalent, so the name “Surfside” fits. Even in the depths of winter, on a good day it’s not unusual to find 50 surfers floating patiently in the lineup, waiting for their turn to catch a wave. Yet the waters never seem crowded, and out-of-towners will encounter none of the aggressive “locals only” attitude found in other states. 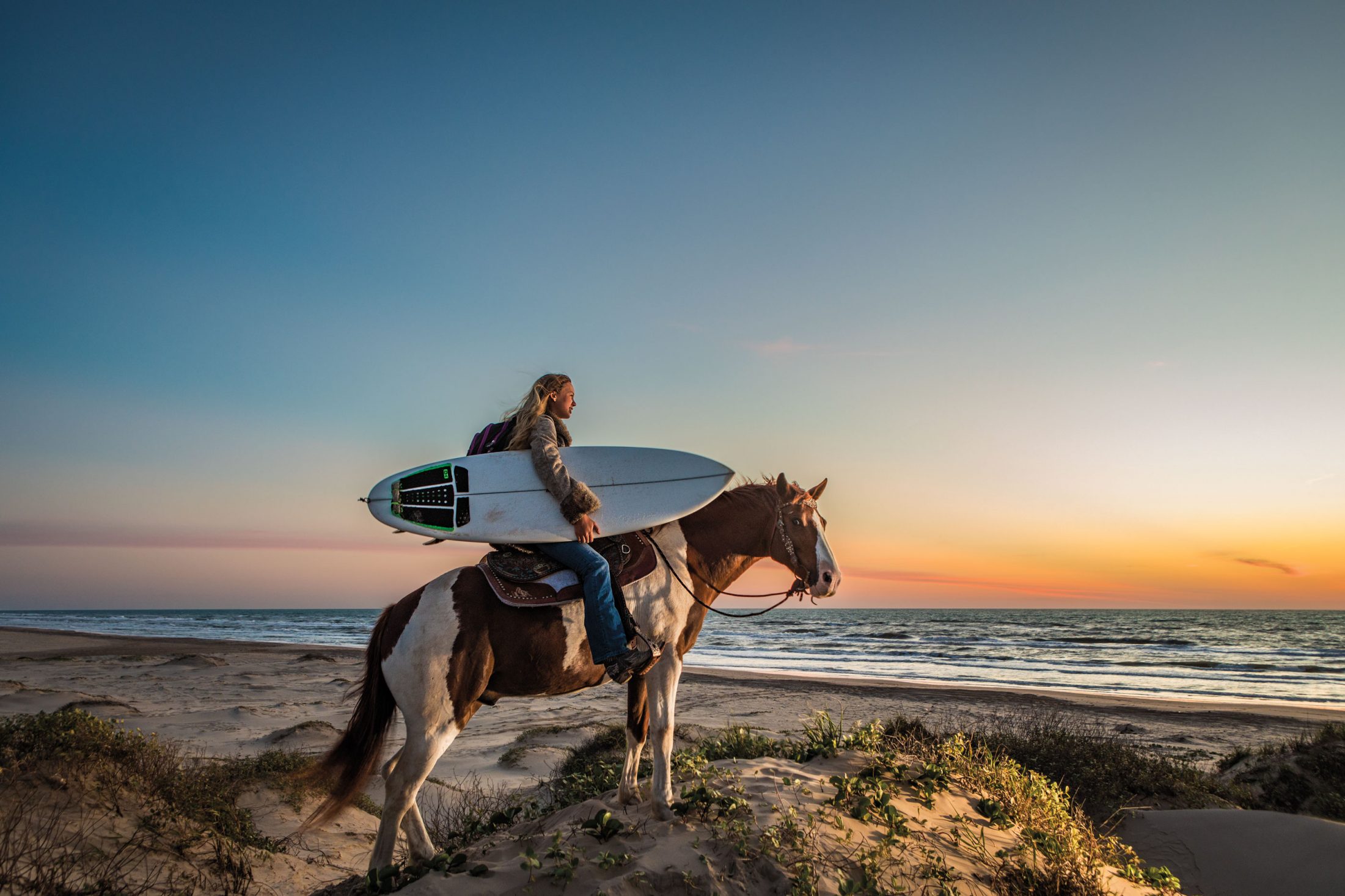 Galveston is the northernmost town in Texas where you can find consistent rollers. Located just an hour’s drive from Houston, the island draws millions of beachgoers in the summer, with numerous surf shops catering to the crowds.

To protect the throngs of summer swimmers from May 15 to Labor Day, the island restricts surfboards and other hard-bottom vessels to certain “multiuse” areas. But during the rest of the year, its 32 miles of beaches are open for surfing, including at Galveston Island State Park, where campers can set up tents behind sand dunes a short walk from the waterline.

On the eastern end of the island, the seawall bristles with jetties and fishing piers, which create a series of breaks with varying characteristics. Surfers have traditionally shown off their skills at the Galveston Island Historic Pleasure Pier at 25th Street and at rock jetties along the beach. At the 43rd Street jetty, C-Sick Surfin’ offers lessons to aspiring surfers. “We have oodles of wetsuits, so as long as the ambient temperature is alright, we can teach lessons year-round,” owner Brian Jarvis says.

You can take surf lessons year round at South Padre Island, where the water temperature in winter averages 60 degrees, significantly warmer than the ocean off California.

Strictly Hardcore Surf Specialties—James Fulbright’s shop on Avenue R—sits just a few blocks away from the 37th Street break, one of Fulbright’s personal favorites. The longtime Texas surfer gets annoyed when he hears people say the state has no surf. Along with his own firsthand experience, he points to online videos showing wetsuit-wearing surfers carving up sizeable sets rolling in from the Gulf.

There is plenty of surf in Texas, as long as you go at the right time of year and keep a close eye on the surf forecast. You’ll find off-season surfers are a small but welcoming tribe. Newbies to the sport—dubbed “kooks”—who might get pushed out of a lineup during the busier months find themselves encouraged and even cheered on by cold-weather veterans.

“In California, you can go to the beach every day and there’s something rideable,” Davis says. “But in Texas, a lot of things have to come together to make that happen. When they predict a swell here, everyone gets all fired up. When the magic does happen, it means that much more.” And the magic more than likely occurs in winter. 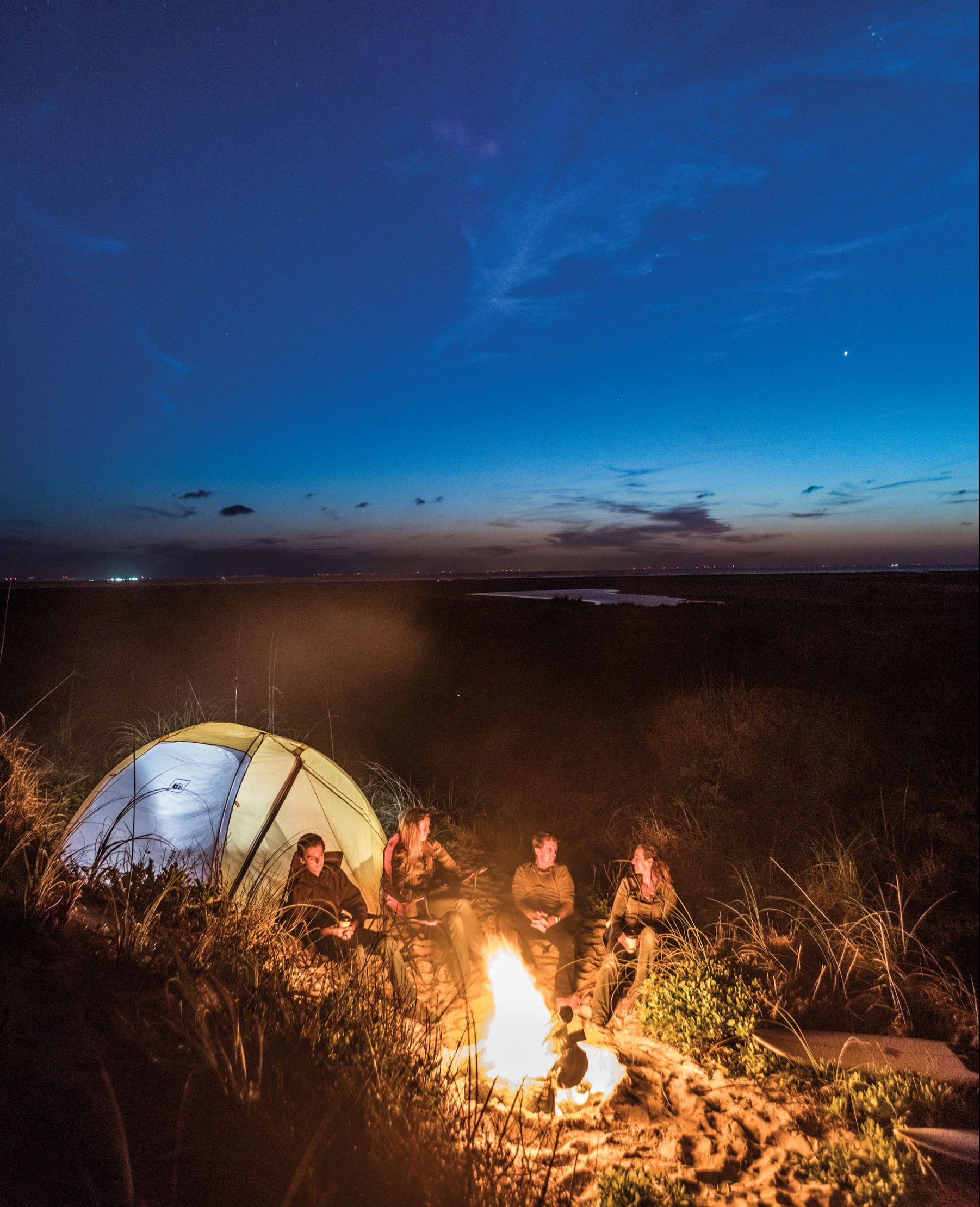