Written by Art Williams, Photographs by © Hogaboom Road, Inc. | From the May 2016 issue | Updated: October 29, 2018 | Filed Under: DaytripperGetawaysParks 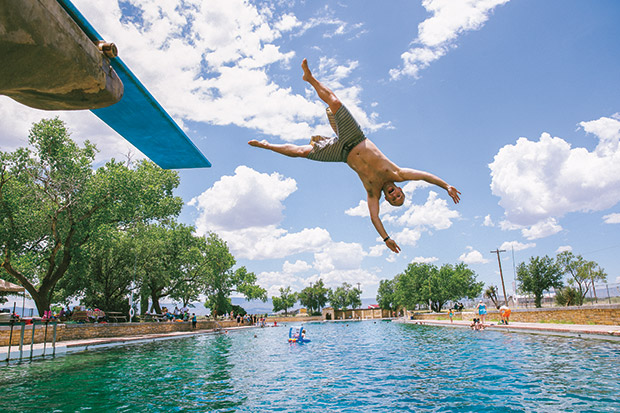 Amid the prickly-pear cacti and rocky hills of West Texas lies a literal oasis in the desert. It’s a place where streams of blue water cut through parched fields, exotic fish swim in crystal pools, and any sight of cool H2O
beckons overheated travelers to DIVE IN!  Unable to resist the call of Balmorhea, I spent the day exploring this paradise in the Chihuahuan Desert.

9:30 a.m. About halfway between Fort Stockton and Van Horn, I exited Inter-state 10 and headed into Balmorhea (population around 490). I discovered a typical tiny burg of quaint buildings and authentic West Texas grit, but unexpectedly, I also found canals of clear water from San Solomon Springs flowing throughout town.

10:00 a.m. I strolled into Balmorhea Rock Shop to investigate one of this area’s main claims to fame—“Balmorhea Blue” agate, a volcanic rock with a distinctive blue hue. The shop collects chunks of native agate, shines them up, and painstakingly incorporates them into handmade jewelry.

10:30 a.m. I wanted to find my own agate souvenir, and luckily Sue Franklin, the shop’s owner, guides rock-hunting adventures. After driving for miles into the desert, our quest began. I quickly learned the “you pick it, you lick it” rule, which required me to lick the rocks to see if they were gems or duds. I spent most of my time picking up (and licking) worthless pebbles, but I did end up with a handful of shiny “Blues,” making my raw tongue well worth it.

12:30 p.m. For lunch, locals pointed me to the gas station! It didn’t take long to realize that Juan Carrasco Mercantile is no ordinary fill-up, but a local institution with a cult following for its refrigerated burritos.
I grabbed a few and popped them into the microwave. After just one bite, I was lost in the homemade green-chile burrito’s spicy deliciousness.

1:30 p.m. I followed the flowing canals out of town and ended up at Balmorhea State Park in Toyahvale, where the water flows forth into an immaculate pool constructed by the Civilian Conservation Corps in the 1930s. Without hesitation, I headed toward the high dive and plunged into the spring-fed pool. After the initial shock of the 72-degree water, I realized that I had just found paradise and my afternoon rescue from the Texas heat.

3:00 p.m. For a closer look at the creatures surrounding me, I rented a snorkel and fins from Toyahvale Desert Oasis across the street and dove in for face-to-face encounters with catfish, softshell turtles, and some endangered Comanche Springs pupfish, which only exist in these springs.

5:00 p.m. I dried off and headed west of town. My first stop was Calera Chapel, a small adobe building established as a mission more than 100 years ago. Today the church bells still ring for worship gatherings and weddings.

5:30 p.m. I kept driving to see the ruins of Phantom Lake Camp, a 1930s tourist stop along the “Old Spanish Trail.” Not much is left except for a few collapsing buildings (no entry allowed) and the stunning backdrop of the Davis Mountains. In the camp’s hey-day in 1933, guests included infamous Chica-go gangster John Dillinger, who drove to Texas to hide out in between bank robberies.

6:30 p.m. Hungry as a West Texas bear, I drove to La Cueva de Oso, known locally as the “Bear Den.” The tacos a la parilla, with seasoned steak, avocado, and lime, were some of the best tacos I’ve ever eaten.

As I sat surrounded by locals with the local flavors hitting my tastebuds, I realized that though this may be a desert town, it’s anything but barren. And just like the San Solomon Springs flow with beautiful blue water, Balmor-hea flows with life, adventures, and surprises just waiting to be discovered. So whether you follow my footsteps or forge your own path, I hope to see you on the road.