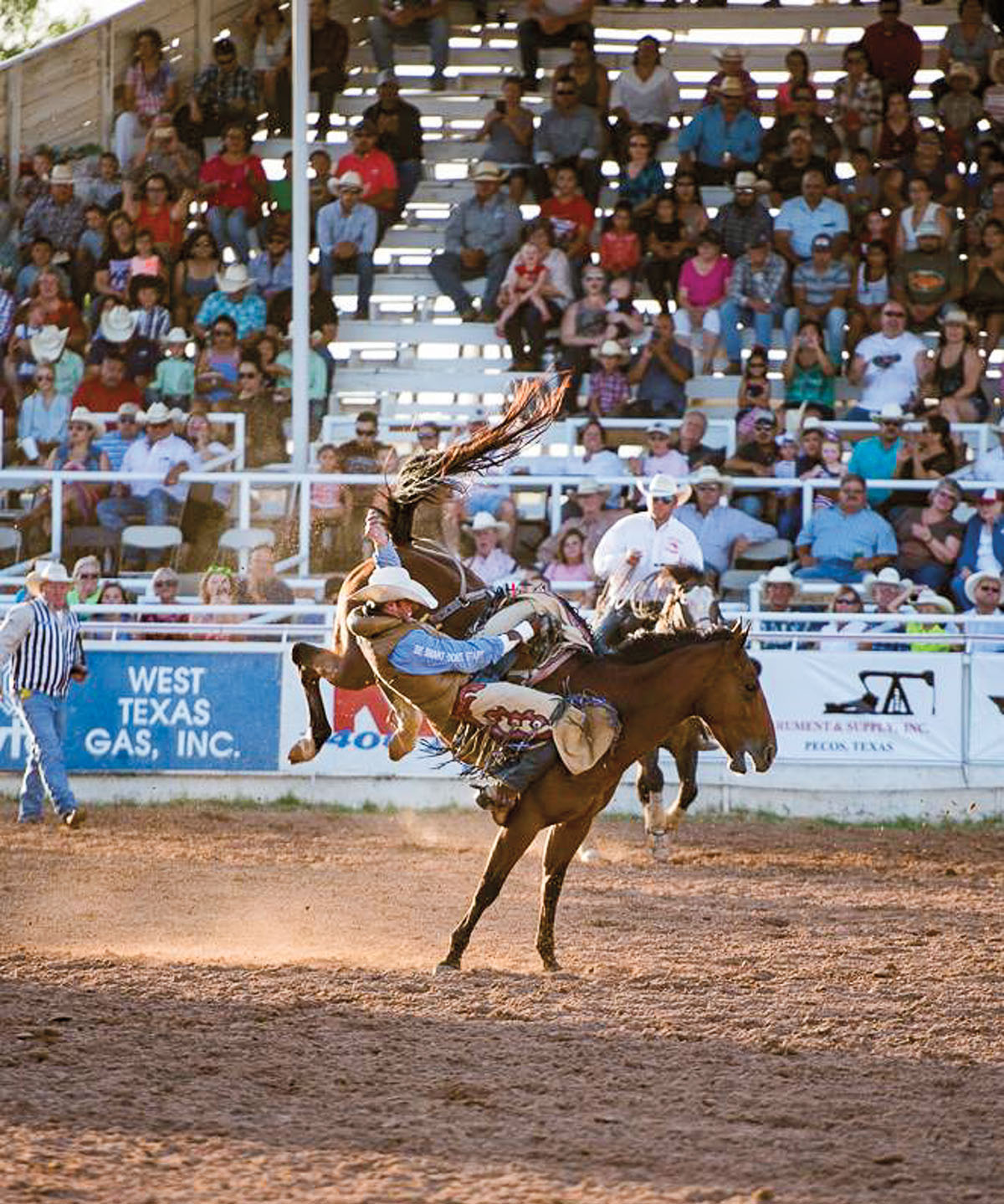 A rider is thrown during the saddle bronc event.

Ask any West Texas cowboy where the world’s first rodeo was held, and you’ll get the same answer: “Pecos” (probably adding under his breath, “you dummy”). In the late 1800s, Pecos was a bustling supply town, positioned right where the Chisholm Trail, Goodnight-Loving Trail, and Butterfield Overland mail route crossed on the dusty Trans-Pecos plains—roughly 100 miles southwest of Midland. The story goes that a couple of cowpokes met for a drink at Red Newell’s saloon. They decided to organize a friendly competition to show off their steer roping skills. Local ranchers put up $40 in prize money, and so, on July 4, 1883, what would become known as the West of the Pecos Rodeo was born.

At least that’s how you’ll hear it told around West Texas. But other cities have also staked claims on being the birthplace of rodeo, and which of them is right remains a matter of considerable debate. To break up the drudgery of working cattle, 19th-century cowboys would often compete to see who could out-rope or outride the others. These impromptu contests
developed into more structured events all over the Southwest. Historians have unearthed plenty of firsthand accounts documenting these early rodeos. To name a few: Cheyenne, Wyoming (1872); Deer Trail, Colorado (1869); and Santa Fe, New Mexico (1847). But maybe don’t mention this to anyone in Pecos.

It’s hard to overstate how passionate Pecos locals are about their rodeo. “It’s like walking into a Baptist church and everybody wants to talk to you about Jesus,” said Pake Rossi, a friend of mine who knows the area well. Rossi spent the last two years living in one of the man camps built to house the thousands of oil field workers who have flooded into Pecos since the shale boom took off there in 2013. But while oil booms have come and gone before, the West of the Pecos Rodeo has been a constant source of town pride since it became an annual staple in 1929. Nine decades later, the rodeo remains the biggest social event of the year.

That was clear on a Friday evening last June as I made my way to the Buck Jackson Arena to attend the 90th consecutive West of the Pecos Rodeo. A good deal of the crowd were seasoned locals, greeting one another with handshakes and hugs. A few people sported shirts that read: “This ain’t our first rodeo.”

There were plenty of out-of-towners, too. Charter buses arrived from Midland and Odessa carrying dozens of employees from various oil and gas companies. Among them was Michael Poynter, a Rice University alum who works for an energy company in Midland. “I’ve been to the Houston Rodeo,” Poynter said, admiring the straw hat he’d just purchased at one of the booths, “but you’re two levels up there. Here, you’re right next to the action.”

Seated on the wooden bleachers beneath a wide, empty sky, the Pecos rodeo feels closer to its early predecessors than the indoor spectacles of their big-city counterparts in Houston and San Antonio. Those are often held in multimillion-dollar stadiums like the new Dickies Arena in Fort Worth, and boast booming sound systems that rattle your bones between each ride. In Pecos, “modern” touches come in the form of a big screen showing replays at one end of the arena.

I was particularly impressed to see one old tradition still being honored. Rather than stand on a platform above the chutes, the announcer, a Florida cowboy named Andy Seiler, delivered his commentary straight from the saddle in the middle of the arena. With his dark chaps spilling over the silvery hide of his gray horse, Seiler knew how to stoke the audience: “This is the home of the world’s first rodeo, so I want to hear some noise!”

The competitors who make the trip to Pecos each year are among the best athletes in the Professional Rodeo Cowboys Association (PRCA). It’s not just the nostalgia factor; Pecos is one of the top 40 prize-money rodeos, with nearly $179,000 up for grabs among the eight different PRCA-sanctioned events. The cowgirls and cowboys delivered electrifying performances. Nodding their way out of the chutes and onto the leaderboard were the Wright brothers. Hailing from Utah, the Wrights are the most famous family in modern rodeo, known for dominating the saddle bronc event, in which riders have to hang on to a saddled bucking bronco for eight seconds to make a qualified ride. 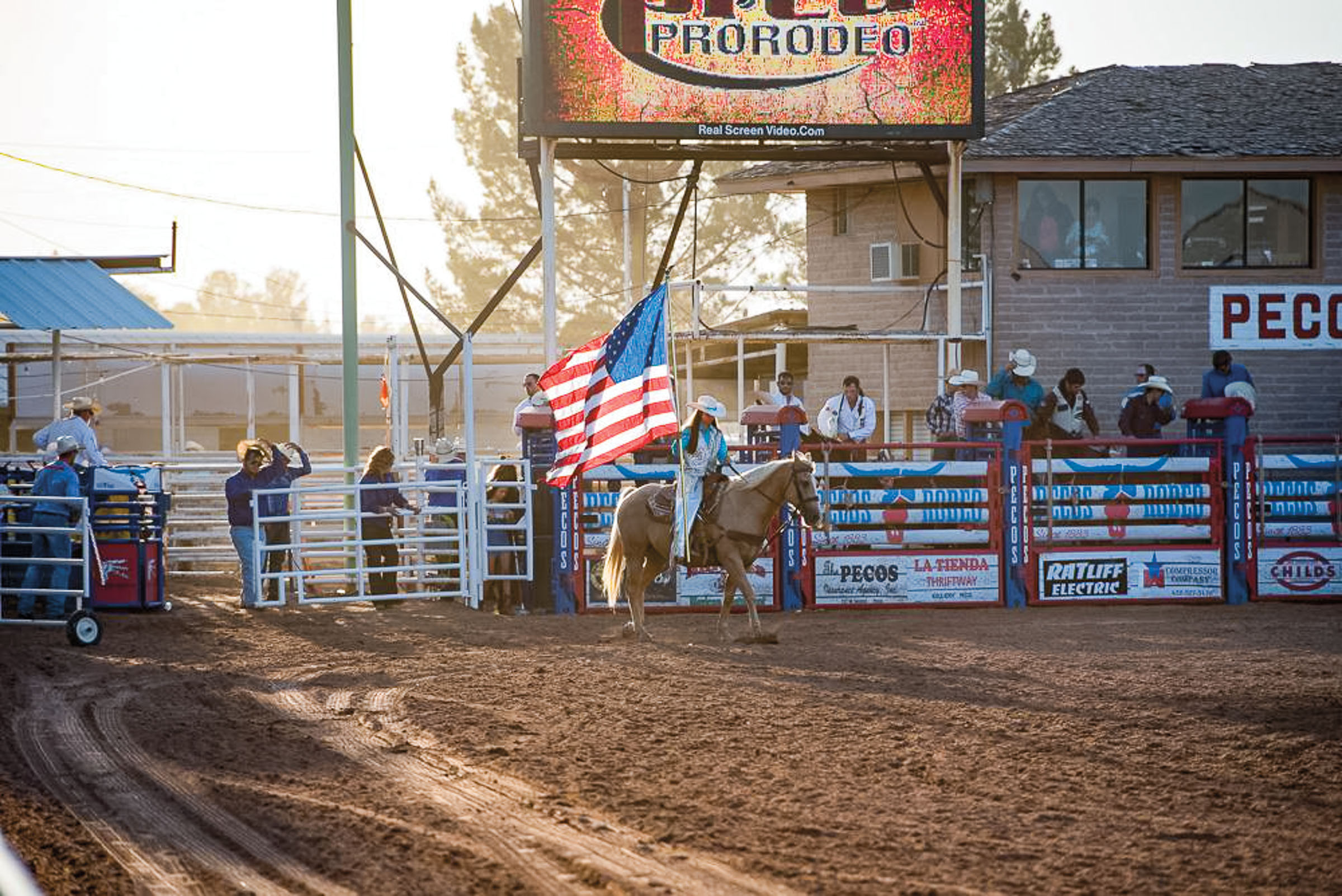 One of the west Texas Dandies parades the flag during the opening ceremony.

Texas was well represented, too. There were cowboys and cowgirls from all over the state: Snyder, Seymour, Bigfoot, Cross Plains, Devine, and places in between. In the timed events, Decatur’s Trevor Brazile did what he normally does: win. Not only did Brazile take first in the Pecos steer roping event—the fastest time to rope a steer and tie three of its legs together wins—but he also went on to claim his record 25th World Champion gold buckle at the National Finals Rodeo in Las Vegas.

The day had been boiling hot, but by 8 p.m., when the rodeo began, the temperature had dropped considerably, and a brilliant West Texas sunset gave way to stars twinkling overhead. About an hour or so into the Friday performance, I took a stroll around the arena grounds to look for dinner. The air smelled pleasantly of smoke from wood-fired pizzas, but I couldn’t resist the tacos al pastor cooking on a large metal disco. For dessert, I grabbed a snow cone. In addition to the food concessions, there were vendors selling trick ropes and Western wear. A line of kids eagerly waited to ride the mechanical bull.

The West of the Pecos Rodeo, currently scheduled for June 24-27, stretches across four days and nights. (In early May, event organizers will decide whether or not to postpone, so check their website for updates.) While events like bull riding and barrel racing are held each night, Pecos mixes up the schedule with a variety of local competitions, from wild-cow milking to the hide race, a timed contest where courageous youngsters lay on a piece of turf and hold on for dear life while a rider on horseback drags them around the arena. Each night after the rodeo ends, couples in tooled leather belts and Stetsons sashay to country bands playing at a nearby pavilion.

Events are also scheduled throughout the day to keep visitors occupied. The rodeo parade kicks things off on Wednesday morning, followed by the Reeves County Sheriff’s Posse BBQ. Afterward, you can wander over to the West of the Pecos Museum to listen to cowboy poets and guitar pickers at the Old Timers Reunion. While you’re there, it’s worth checking out the museum itself. The historic building still bears bullet holes from the town’s outlaw days. There’s even more history just across the street. An old train depot was recently renovated to house the Texas Rodeo Hall of Fame. New inductees are announced every year during the rodeo.

Whatever you do with your day, by the time sunset rolls around, you’ll be ready to rodeo. Each night begins with the West Texas Dandies, Pecos’ mounted standard-bearers, riding through the arena carrying the U.S. and Texas flags. On Friday night, they raced around on horseback looking a lot like “The Star-Spangled Banner,” wearing white shirts, sparkling red-and-blue vests, and white chaps with red fringe. During the opening ceremony, one of the horses bucked, and the young rider took a pretty nasty tumble. I was amazed to see her later in the night, back in the saddle, toting her flag around the arena.

As the rodeo ended, I caught up with her behind the chutes. She told me her name is Machinzee Crum. She’s 10 years old and a Pecos native. I asked if she was OK from the fall. She shrugged that she was fine. “Always get back on your horse,” she said, matter-of-factly.

I asked if she’d be riding again next year. Crum didn’t hesitate: “Yes.” And under her breath she might’ve added, “you dummy.”