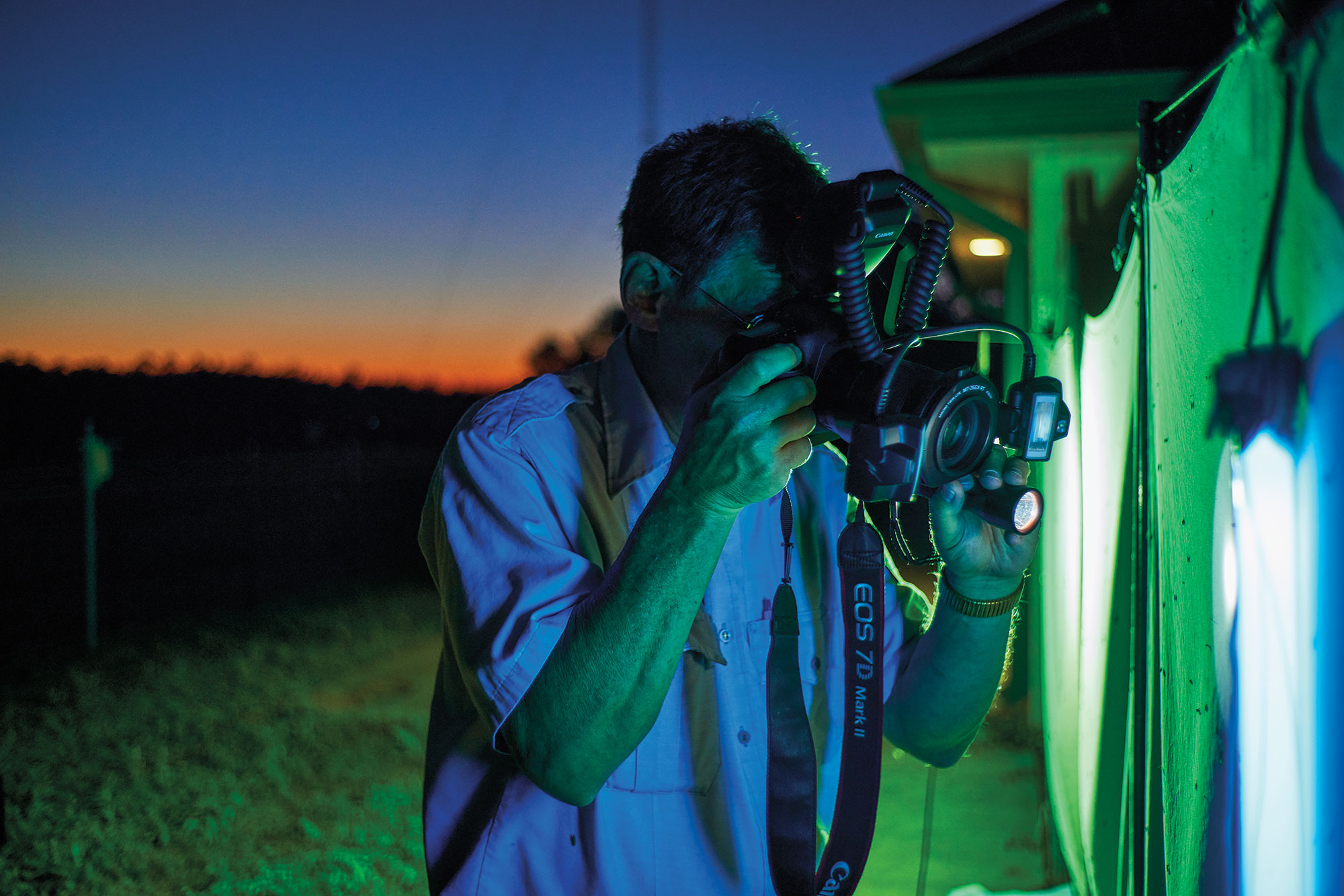 About 10 years ago, Stuart Marcus, refuge manager for the Trinity River National Wildlife Refuge, arrived early one morning at his office to find that a tiny visitor had stopped by.

Sporting glistening spiked hair and garbed in an exotic dayglo fuchsia/tangerine/black ensemble, this emissary from the order lepidoptera might well have been saying, “I’m here to introduce you to my tribe.”

Moth Night Out on July 27 at the Trinity River National Wildlife Refuge, 601 FM 1011 in Liberty, features a brief presentation and opportunities to identify dozens of moths in conjunction with National Moth Week July 20-28.
936-336-9786
fws.gov/refuge/trinity_river

Curiosity aroused, Marcus snapped a photo and uploaded it to the Butterflies and Moths of North America website, which identified his flamboyant guest as a Xanthopastis regnatrix (Spanish moth), a rare visitor to Texas that feasts on spider lilies, amaryllis, and figs in its larval stage. And although he found his visitor charming, Marcus had more pressing matters at hand: Soon, he and his staff would be moving out of their cramped Liberty building into a spacious new headquarters several miles outside of town on the grounds of the 30,000-acre refuge.

Arriving at the new building early one morning, Marcus discovered that the white-painted rear entry door—swathed in white fluorescent lamplight in the predawn—was teeming with moths. “I grabbed my camera, and then it just started getting crazy,” he says. “I wanted to see just how many species of moths I could find.”

Marcus, whose fit athleticism belies his years (he’s been with the U.S. Fish & Wildlife Service for four decades), then began constructing frameworks to hold large white sheets behind the building; some lit with mercury-vapor lamps, some with black lights, and others with regular light bulbs as some species of moths only see certain spectrums of light. Using books and online resources, he began in earnest to identify the moths he photographed. Although the order lepidoptra contains both the butterfly and moth families, a few key indicators separate them: Butterflies generally have clubbed antennae, while moths have filiform (thin and straight but without the club at the tip) or feathery ones; butterflies tend to rest with wings clasped vertically, and moths tend to rest with their wings tented on their backs or spread flat. Moreover, unlike butterflies, which are diurnal (daytime) fliers, moths are predominately nocturnal, with a fewer number of species considered as either crepuscular (twilight) or vespertine (evening), allowing Marcus plenty of time outside of his daytime duties to pursue his newfound passion. 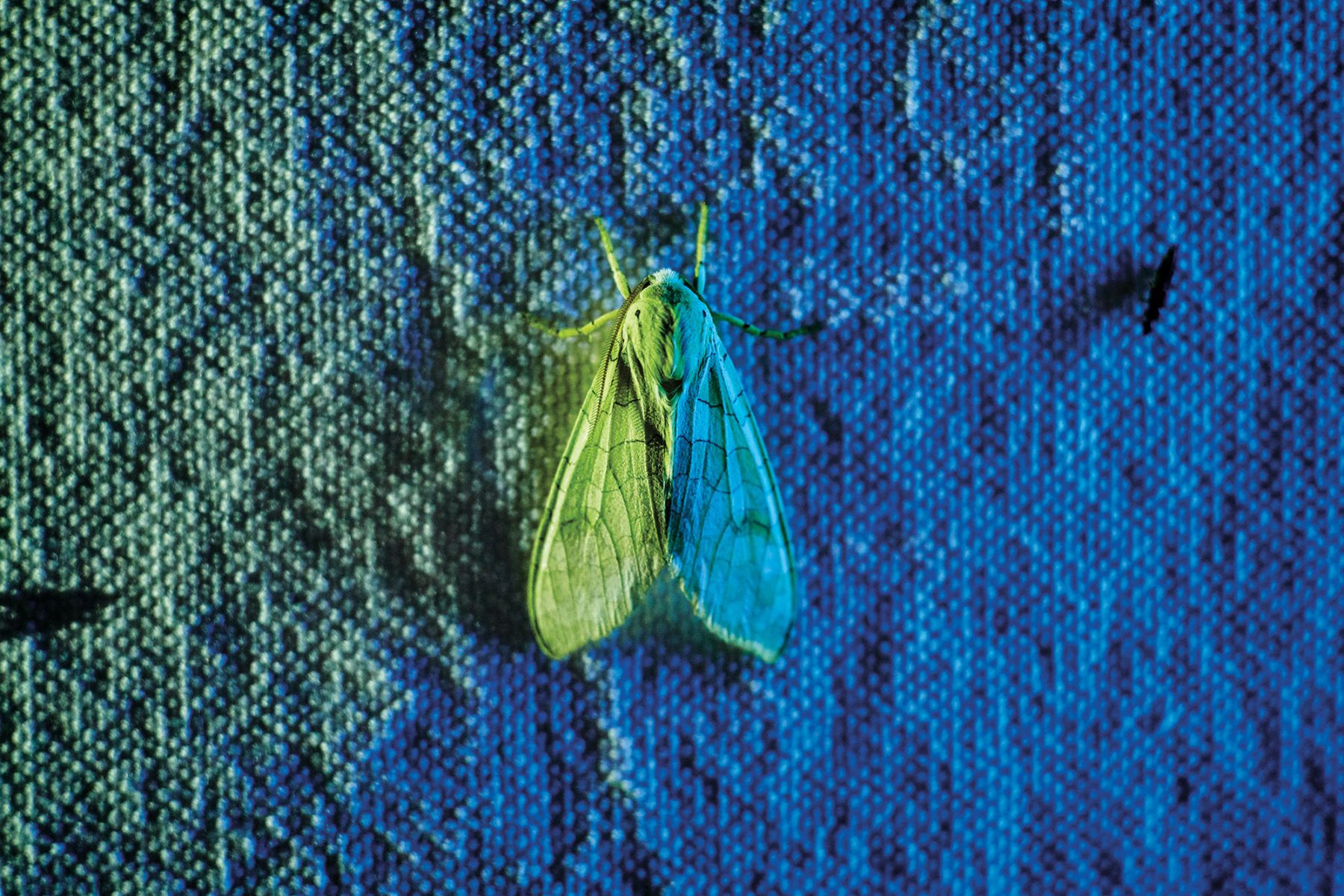 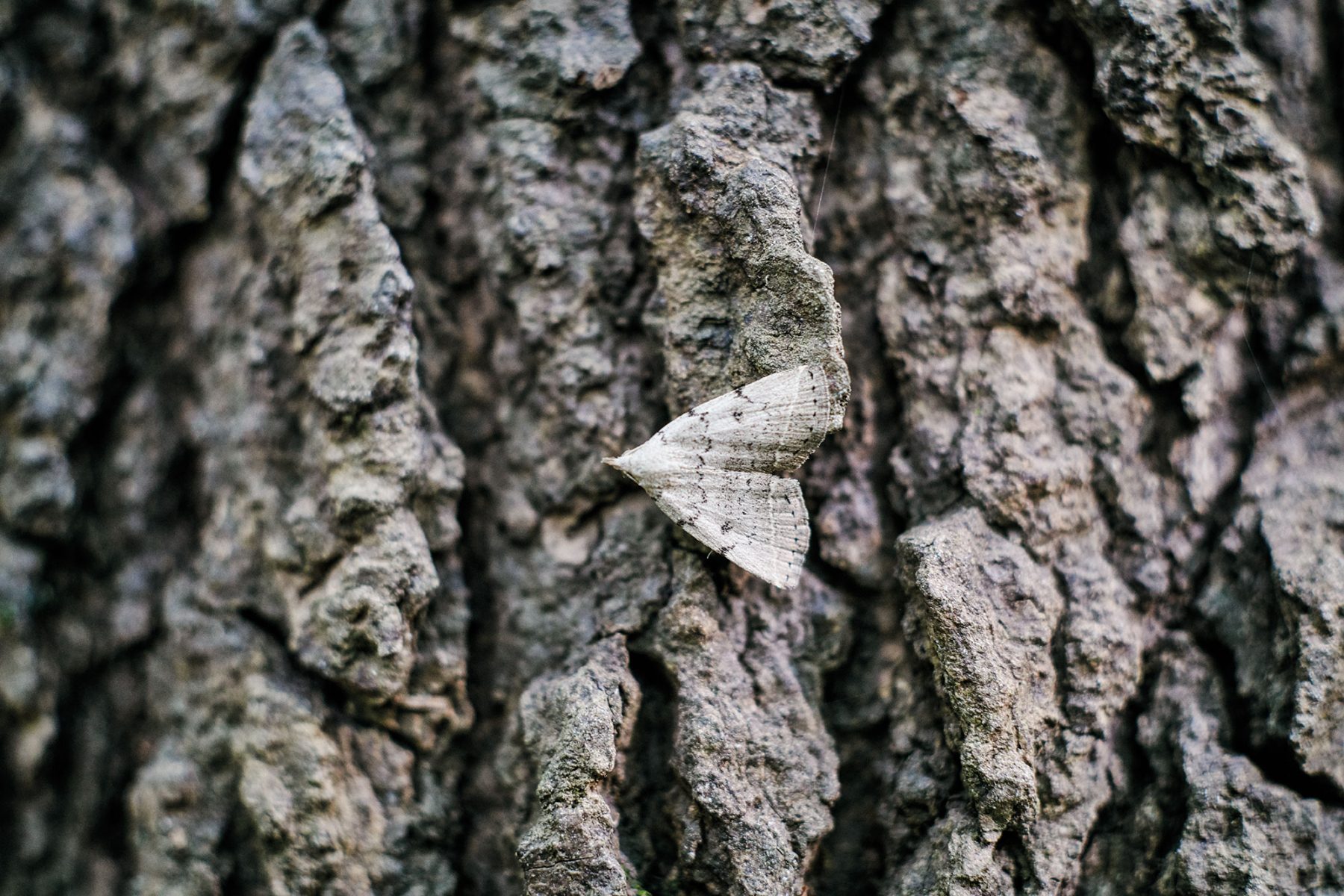 Marcus has identified a mind-boggling 900 species of the roughly 4,000 species that have been identified in Texas—right on the back porch of his office.

As he began to catalog the moths he photographed, he might have well wished he’d fallen down Alice’s rabbit hole instead. With more than 11,000 species of moths identified to date in the U.S.—compared to 750 species of butterflies and 914 species of birds—Marcus faced a daunting challenge in identifying these oft-drab and nondescript bugs. To further complicate his task, males and females of the same species may be dissimilar, and each sex’s appearance may vary depending upon the time of year. Also, a moth’s adult stage may only last—as in the case of the Luna moth—for a week, as its sole biological imperative is to reproduce before it dies.

Over the past seven years, Marcus identified a mind-boggling 900 species of the roughly 4,000 species that have been identified in Texas—right on the back porch of his office. “Either that 4,000-species count is low, or I’m really, really good,” says Marcus with a self-deprecating chuckle.

Both may be true. Plus, the Trinity River NWR headquarters just may be at a serendipitous spot, being situated in an open meadow high on a mixed pine-and-hardwood bench overlooking bottomland hardwoods and cypress-rimmed swamps, with the Trinity River itself about two-and-a-half miles away. Called “ecotones,” these convergences of biomes can attract species, including moths, with dissimilar habitat preferences. 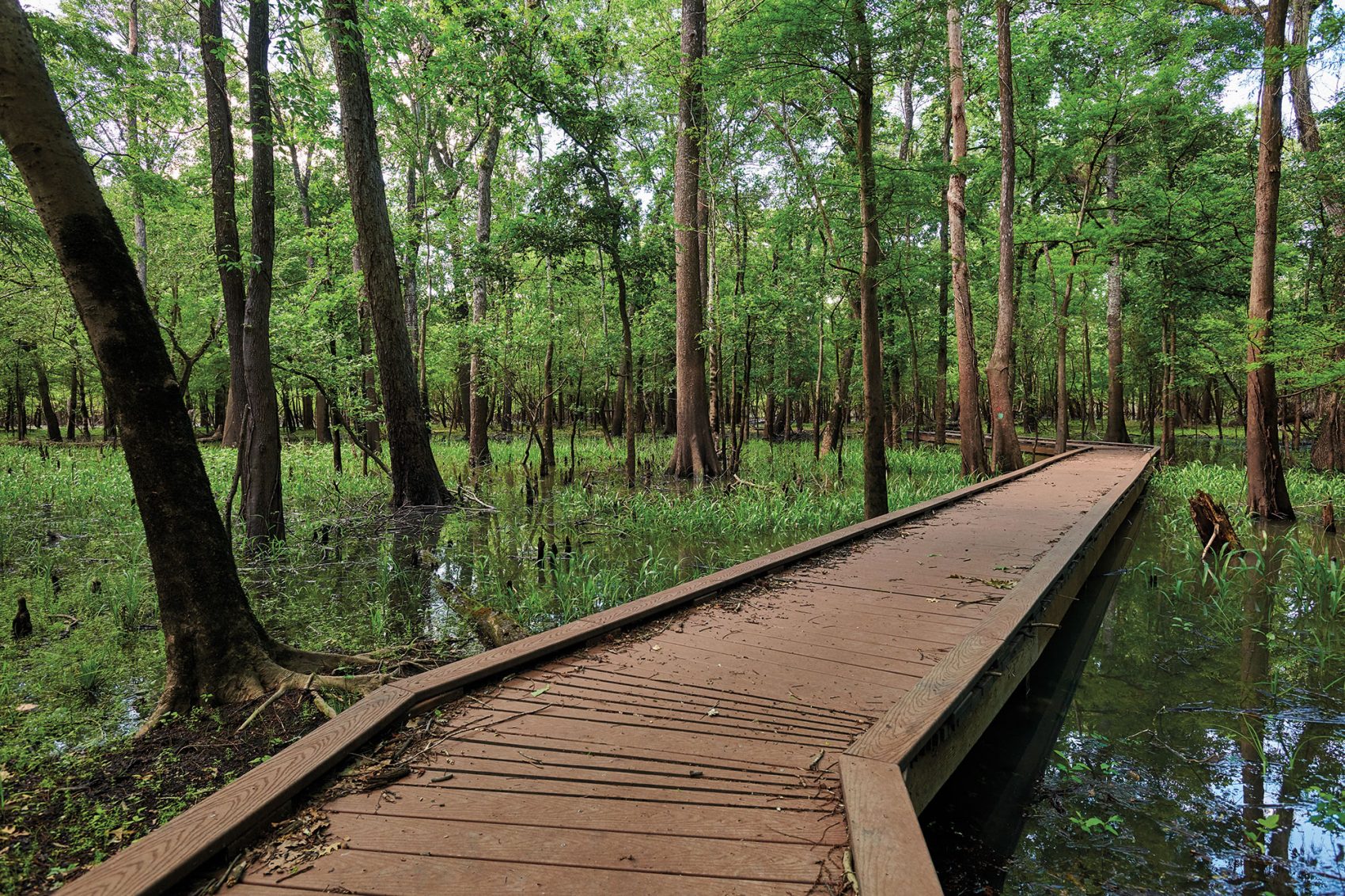 Marcus maintains his “master moth list” on an ever-expanding Excel spreadsheet, noting both the year and month of new and previous sightings. “One, I want to create a refuge list of all of the moth species we’ve found here; and two, I want to be able to collaborate with other scientists who are looking at such factors as climate change and when certain moths show up year over year.”

Since 2013, Marcus has hosted an annual Trinity River NWR “Moth Night Out,” held the Saturday night of National Moth Week, a celebration in the last full week of July. Last year, more than 35 folks—including a half-dozen enthusiastic children who couldn’t believe their double good fortune in being up past bedtime and being able to play with bugs—turned out for the event.

“Many people consider moths to be the ‘ugly stepchild’ of butterflies. Hopefully, this experience will change a few minds.”

After an informal presentation, the visitors spilled out the back door into a dome of velvety blackness pierced by star pinpricks overhead and clustered around the large white sheets illuminated by various lights. Coached by Marcus and the refuge interns, the group identified about 50 moths, including those with such enchanting names as Joyful Virbia, a pink-and-gray subspecies of Tiger Moth; the Beautiful Wood-Nymph; the camouflage-patterned Fall Armyworm Moth; and The Brother (Raphia frater), a nod to its six or more closely related subspecies.

With a biologist’s precision and a childlike exuberance, Marcus led the evening expedition into the world of moths. He admitted there are a few bad actors, such as fall webworms, tent caterpillars, and gypsy moths, a non-native species. “Moths are pollinators, they break down detritus, they serve as a food source to other wildlife,” he says. “The negatives? Not many. And they’re incredibly beautiful.”

“Many people consider moths to be the ‘ugly stepchild’ of butterflies,” Marcus says. “Hopefully, this experience will change a few minds.”