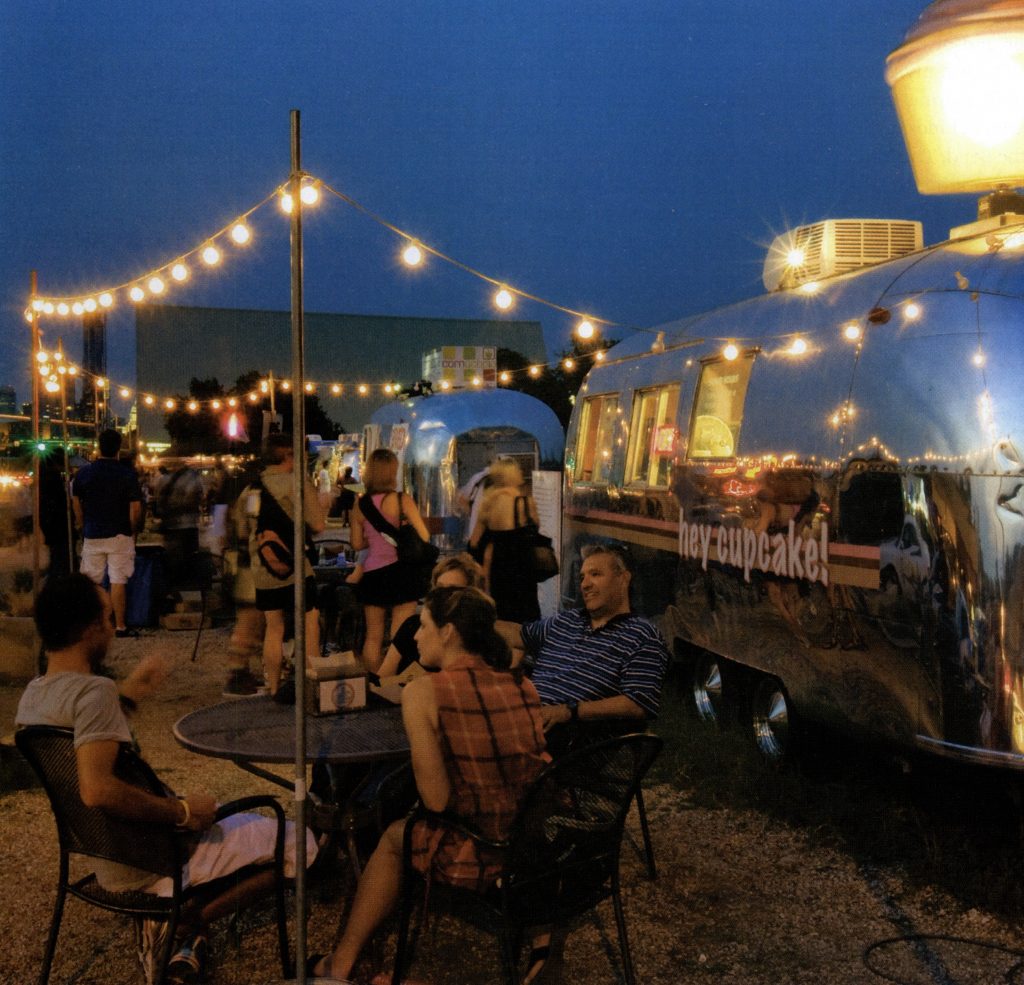 Sidewalk food vendors aren’t a new concept to Austin; fleets of taco trucks rove around town every day, serving Tex-Mex street food to everyone from construction workers to UT students. But in the last couple of years, vintage trailers and boxy trucks retrofitted with commissary kitchens have sprung up to offer more eclectic street cuisine. Nowhere are these micro-restaurants more visible than on the 1600 block of South Congress Avenue.

In a gravel lot, across the street from some of the strip’s boutiques and restaurants, Hey Cupcake! serves a variety of its namesake treats-hundreds a day-from a shiny Airstream trailer. Choices include vanilla, chocolate, red velvet, and carrot cupcakes topped with vanilla buttercream, chocolate buttercream, and cream cheese icings. (Ask for a “Whipper Snapper” and your server will inject fresh whipped cream into the center of your cupcake, free of charge.) Hey Cupcake! opened near the UT campus in  March 2007, but moved to South Congress a few months later; it’s generally recognized for kicking off the city’s trailer-food  craze. (Hey Cupcake! now has a brick-and-mortar location on Burnet Road, in north Austin, plus satellite trailers throughout the city.) At the other end of the same South Congress lot, The Mighty Cone pushes street cuisine into gourmet orbit. Owned by the same team behind Austin’s iconic Hudson’s on the Bend, The Mighty Cone serves portable—and more affordable—versions of the restaurant’s signature hot-and-crunchy trout.

Taking a break from working the trailer’s counter, Jennifer Nash says, “Hudson’s customers come here and say, ‘We love the restaurant, so we had to try the trailer.'” Such hungry pilgrims leave happy: The menu features a choice of chicken, avocado, or shrimp breaded in a mix of sesame seeds, almonds, com flakes, and chili flakes—then deep-fried and wrapped in a flour tortilla. You can also get beef and veggie sliders and milkshakes. Out front, a half-dozen bright red picnic tables, shaded by umbrellas, comprise the al fresco dining room. A few blocks west, on South 1st Street, Torchy’s Tacos also enjoys a devoted following, who dine at its Trailer Park & Eatery overlooking Bouldin Creek. The taco-stand trailer honors Austin’s affinity for Mexican food with migas tacos in the mornings Ooaded with eggs, New Mexico green chiles, pico de gallo, cheese, and avocado), and, in the evenings, a dozen or so taco varieties, like shrimp with creamy chipotle sauce and roasted pork with green chiles and queso fresco.

”We wanted to bring street food to the west side of Austin in a way that the neighborhood would appreciate,” says owner Mike Rypka. He emphasizes that establishments such as his must be fully licensed and are regularly visited by Travis County health inspectors. Even with the stringent health-code regulations, Rypka, who was a corporate chef for Dell and Chuy’s, admits it’s a lot easier to set up a trailer than a restaurant. “It’s a great way for people to start a business. There are fewer costs and a little less risk. Plus, the trailers are mobile, so if one location doesn’t work out, you can just move a few blocks down and try it there.”

With that kind of freedom, it’s no wonder so many nouveau food trucks are satisfying Austin’s cravings for different kinds of foods. Those hooked on Vietnamese cuisine rave about the lemongrass chicken served in a French baguette at Lulu B’s Sandwiches, located in a spiffy trailer near Lamar and Oltorf. Vegetarians and their friends head to Counter Culture at Avenue F and North Loop, where they find organic and local ingredients in vegan versions of Philly cheese, tuna, and barbecue sandwiches. At Barton Skyway and Manchaca, Giovanni Pizza Stand serves up hot slices, whole pies, and half a dozen pastas.

With the record-breaking temperatures this past summer, it’s no surprise that sno-cone trailers were among the more popular food outlets. On Manor Road in east Austin, for instance, in a parking lot in front of El Chilito restaurant, Rola Aloha served Hawaiian-style shaved ice with enticing flavors like green tea and mango, lemon-lime ginger, and sugar plum—all made with raw sugar—and agave-based syrups. But with the weather turning cooler, owner Chella Chardona says she’ll be expanding her menu. “The shaved ice has been great for the hot weather, but this fall we’re thinking of using our syrups with sweet and savory gourmet waffles instead; ‘ she says. “And we’ll serve hot tea and cider.”

The choices go on and on for hungry Austinites and visitors alike-whether it’s grabbing a freshly made falafel and hummus from downtown’s tiny blue Kebabalicious trailer after some late-nightclubbing; enjoying a crepe filled with spinach, feta cheese, and roasted garlic at Flip Happy Crepes after a dip in Barton Springs; savoring a coconut smoothie at Cheer Up Char lies after dinner on East 6th; or scarfing down fried chicken and waffles from the colorful Lucky J’s in north Austin.

I’ll admit I thought that trailer-prepared sushi would prove to be too much of a culinary stretch. But Sushi-A-Go-Go, a shiny Magnum trailer parked at a gas station on Manor Road, has a line of people waiting when I pay a visit. When owner Kayo Asazu slides open the counter window, the seductive aroma of Japanese cuisine drifts into the parking lot.

Originally from Japan and trained as a sushi chef in New Orleans, Asazu says business has been booming since she opened in July: “My customers say they appreciate that they can get restaurant-quality sushi without restaurant prices.”

As she walks me through the menu of about two dozen choices (from house-made crab salad rolls to a “Texan Roll” with ribeye steak and candied jalapefios), customers line up and talk about the food they’d serve if they could trick out a trailer with a kitchen. One woman decides she’d do Spanish tapas, but she isn’t sure where she’d park. Which reminds Asazu that, even with good business, she’s planning to relocate her trailer when the weather turns cooler. Just try doing that with a regular restaurant.