Fort Worth: How Now, Cowtown? 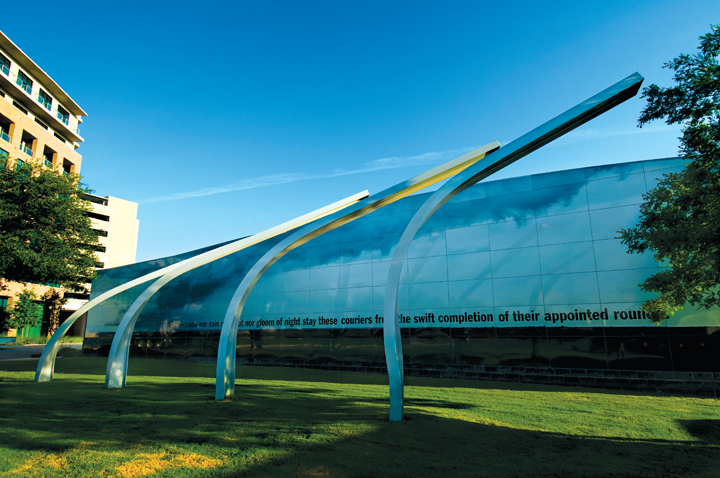 This artwork, in front of the new post office, was created by nature when a tornado contorted these billboard suppports. (Photo by Kevin Stillman)

The face of Fort Worth’s Cultural District changes almost daily, it seems. If you haven’t seen the cluster of museums and surrounding environs for even a few months, you’d hardly recognize them now.

The skyscape of construction cranes has come and gone, leaving behind—among a long list of shiny new things—an enormous new Science and History Museum to replace the modest original. Nearby, outdated stores and offices have disappeared, with a boutique hotel and chic new bistros coming to replace them. Run-down warehouses just to the east of University Drive continue to vanish, with ultramodern complexes of restaurants, cocktail lounges, yoga studios, and fashionable townhomes taking over.

In spite of the beleaguered economy, development around the beloved quarter, a stone’s throw west of downtown, has boomed, and some Fort Worth fans wonder how this renaissance will affect the longtime cowboys-and-culture lure. Locals love that in addition to a century-old rodeo heritage, some of the nation’s great artworks live in Fort Worth, with names like Picasso, Warhol, and O’Keeffe attached. Even more precious to many longtime Fort Worthians is the fact that the largest collections of work by the renowned Western artists, such as Remington and Russell, were amassed by Cowtown’s cattle kings and oil barons and donated to local museums.

With Fort Worth hitting its largest single growth spurt in history, will our little town’s new uptown ways dilute its homey character? If too much Dallas flavor moves in, do we lose our distinction from our neighbor to the east?

“The growth and development on the west side and downtown aren’t going to change the personality of Fort Worth,’’ says State Representative Charlie Geren, whose district lies in Fort Worth (and whose favorite T-shirt reads, “Life’s too short to live in Dallas”). “We’re moving forward, even through the downturn, and that means a lot to the people who live here.”

Herewith, a guide to the evolving Cultural District, with five of the more exciting developments detailed. See for yourself how Cowtown’s becoming Nowtown.

Along Gently Street, across from the National Cowgirl Museum and Hall of Fame, the Fort Worth Museum of Science and History reopens in November. No longer the humble little sister keeping company with giants like the Kimbell, Carter, and Modern Art museums, the brand-new favorite measures 166,000 square feet in multiple levels of space; all that remains physically of the original museum is the Omni (IMAX) Theater. The museum’s dramatic new design, a contemporary complex of colorful square shapes and barrel vaulting, comes from the Mexican architectural firm Legorreta+Legorreta Magnificent new spaces will house the revered Museum School, with hightech classrooms and a courtyard; DinoLabs, where life-sized recreations of dinosaurs found in North Texas feature actual fossils; Energy Blast!, with 4-D theater technology that illustrates the physics of energy exploration and production in North Texas; and an interactive gallery called the Fort Worth Children’s Museum, where patrons from infants through eight years old enter through the mouth of a dragon.

There’s also a cluster of five interactive learning spaces for tweens, teens, and adults called Innovation Studios; the Fort Worth History Gallery, telling Cowtown’s story since the 1870s; the Cattle Raisers Museum, detailing the history and science of cattle and ranching; and Noble Planetarium, where you’ll travel 13.7 billion light years from home. Perhaps most impressive are the main courtyard, shaded by a giant live oak with sitting areas, and the Urban Lantern, a 76-foot-high structure made of nearly one hundred 500-pound-glass panels, which functions as the museum entrance.

Museum Place, a development facing the Kimbell and Modern Art Museums, covers 11 acres with angular structures crafted from shimmering glass and sleek metal and stone. Among the earliest tenants, Eddie V’s Prime Seafood—instantly the busiest restaurant in town—owes much success to its cool vibe and nightly live music offering. Domain, a posh home furnishings store, relocated her, as will two hot Dallas restaurants looking to expand westward—Cafe San Miguel (tacos al pastor and lobster enchiladas are specialties) and The Social House (brews, fish and chips, burgers). Condos will fill in the rest of the one-million square feet of space. Across the street, in front of a new post, you’ll see a piece of art created by nature: The tornado that ripped through Fort Worth in 2000 wrestled a billboard off its base, leaving four giant steel poles bent dramatically. Left as a piece of public sculpture, the poles point toward the inscription on the post office wall that reads, “Neither snow nor rain nor heat nor gloom of night stay these courtiers from the swift completion of their appointed rounds.”

A 13-acre mixed-use development West 7th lies immediately eats of the museums. Apartments and offices will occupy more than half of the space, with a wealth of restaurants and retail comprising the balance. Foodies will choose between pasta at Patrizio, pizza from Fireside Pies, gelato at Paciugo, fish and chips at Delaney’s, and steaks at Bailey’s Prime Plus, all due to open this winter or in the coming spring. On the east end along Foch Street, locals have quickly taken to elegant cheesecakes and decorated cookies at J. Rae’s Bakery, yoga classes at Bikram, wine tastings at Times Ten Cellars, fajitas at La Familia, and cutting-edge fashion for chic men and women at Dean-Kingston, a funky boutique with a 1964 turquoise Cadillac perched on the rooftop. A half-block west, facing Seventh Street, Backwoods offers every possible accouterment for outdoors-sporty types in a showplace of a store.

Montgomery Plaza occupies the 1928 structure formerly known as the largest Montgomery Ward in the southwest. The first of the new renovations along Seventh Street, this landmark contains high-end loft dwellings on its upper floors and assorted retailers and eateries on the ground floor. The big hits to date have been a runners’ supply store called Luke’s Locker; a contemporary art decor shop called Uncommon Angles; a steak join and cocktail bar called Mac’s; a women’s clothing boutique called Dolce Vita; a sports bar called Boomer Jack’s; and a lively Salvadorian/Tex-Mex restaurant from Dallas called Glorias.

Facing Montgomery Plaza, a 25-acre destination called So7—named for its location South of Seventh—consists largely of townhomes, condos, and a 150-room Residence Inn. So7 also delivers dining that promises to be a big hit, thanks to its prime location a few feet from the lush green space of Trinity Park. Opened in late summer, Love Shack serves a delightfully messy ground prime steak burger topped with a quail egg. So7 Bistro will be an intimate French cafe and Chuy’s, an Austin favorite, will offer Tex-Mex food and drink in a sprawling space overlooking the park. An easy stroll away, the handsome Police and Firefighters Memorial, dedicated earlier this year, anchors the north end of Trinity Park. A serene place to end a tour of the Cultural District, the memorial brings to mind again Fort Worth’s enduring sense of civic pride—and a reminder that new can be good, after all.