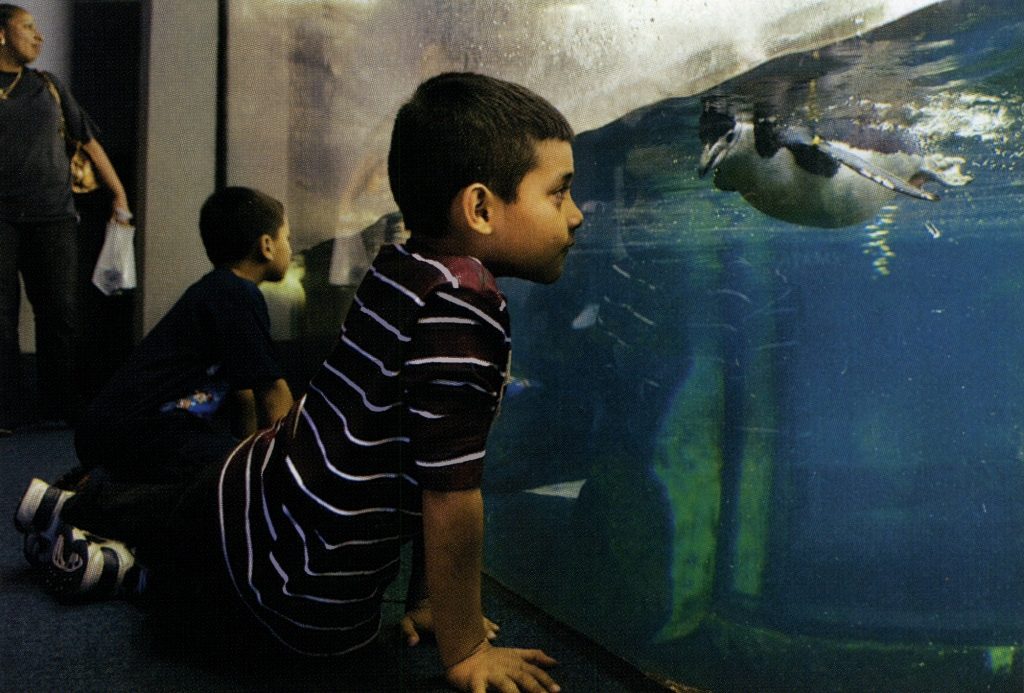 Five species of penguins call Moody Gardens home. For an especially intimate look at these intriguing birds, sign up for a Penguin Encounter ($20), a behind-the-scenes tour led by a staff biologist.

The three glass-and-metal pyramids of Galveston’s Moody Gardens have always been something of a mystery to me. After more than 20 years of living in the Houston area, and in spite of innumerable trips to the nearby island’s seawall and historic districts, I had somehow never managed to detour toward
this popular attraction. My eight-year-old daughter, Marlo, on the other hand, had been there several times on field trips, and always returned cajoling me to come with her on the next visit.

So one warm weekend we drove across the causeway toward the looming pyramids, shimmering in the midday heat. Once inside the visitor’s center, we were soon overwhelmed by all that Moody Gardens has to offer. Which pyramid should we visit first—the Aquarium Pyramid, the Rainforest Pyramid, or the Discovery Pyramid? Should we get tickets to all three of the on-site theaters? And which of the seven films offered in the IMAX 3D Theater should we attend? Would we have time to go to the Palm Beach water park?

Swept up by a throng of tourists, we made our way first to the calming environs of the Aquarium Pyramid. A meandering path led us through two floors of massive tanks showcasing the biodiversity of the various ocean regions. We marveled at the acrobatic feats of the seals, which twisted and turned in smooth’ arcs through the water, and we laughed at the playful antics of the penguins. The seahorse display captivated us, and Marlo was thunderstruck by the “pregnant” male seahorses, which carry the fertilized eggs in a belly pouch until they are ready to be born. Watching the males with their distended abdomens, dragging themselves along the bottom of the tank while the trim little females scooted about gracefully I felt as though the world was a little fairer. And we were both enamored the dwarf seahorses, so tiny that they were barely discernable amid the seagrass.

From there, we ventured into a clear tunnel that cuts through a gigantic tank filled with Caribbean sea creatures, including a huge loggerhead turtle, flashing schools of silver Crevalle jacks, and several kinds of sharks. The sand tiger sharks looked particularly menacing, with their exposed rows of teeth, yet this did not stop a team of divers from entering the tank at feeding time, armed with nothing more than a single piece of PVC pipe to gently nudge away any sharks that might come too close for comfort. Afterward, when asked about her favorite animals in the Aquarium, Marlo replied matter-of-factly, “the people.” I had to admit: It was pretty exhilarating to watch divers swimming amid sharks.

Inspired by the experience, we decided to catch Sharks 3D in the IMAX 3D Theater. Through the lenses of our polarized glasses, hammerheads and great whites appeared to lunge from the giant screen. The effect was so realistic that at one point, confronted by a field of oncoming jellyfish, Marlo reached out to brush them away. Next we lined up for the Ridefilm Theater to see Dolphins—The Ride. As the film got underway, I was taken by surprise when the entire bank of theater seats began to lurch, moving up, down, and sideways, synchronizing with the movements of the leaping dolphins on screen. Marlo squealed with delight, but I left feeling a bit queasy. The 4D Special FX Theater was less intense, yet it concealed secrets of its own. During the screening of Planet Earth: Shallow Seas 4D, we were bombarded with wind, ocean spray, and other effects built right into the seats.

Emerging from the dark sanctuary of the theater, we headed for the Rainforest Pyramid. In its sun-drenched enclosure, we explored the exotic flora and fauna of the tropics. A laminated map guided us to the more noteworthy plant species. We were able to locate the Fish Poison Tree, but we searched in vain for the Chocolate Tree. Some of the animals proved equally elusive, camouflaged in the lush vegetation. The two-toed sloths had lodged themselves into the upper reaches of a tree, where they slept, immobile, greatly resembling heaps of shag carpeting. The ocelot was also napping in the back of its cage, offering only occasional glimpses of its twitching tail. But the bat cave swarmed with activity, and the blue-and-gold-feathered macaws returned the gazes of gawking onlookers with inquisitive eyes.

As the shadows grew longer, we realized that we’d never be able to see everything in one day. Marlo protested that we still hadn’t seen the Discovery Pyramid, nor had we visited Palm Beach. Before I knew it, I had promised to return.

Two weeks later, we did return, intent on doing it all. This time, we made a beeline for the Discovery Pyramid, which housed a moving exhibition about the
Titanic. We solemnly examined personal artifacts recovered from the doomed vessel—everything from chamber pots to sheet music to teacups—and read about those who survived and those who didn’t. Upon hearing that an exhibition called Bones: An Exhibit Inside You would be on view in the coming months, Marlo looked up at expectantly, already plotting our next visit.

Exiting the pyramid complex, we crossed the street to the pure white sands and clear waters of Palm Beach. There, we spent the rest of the day lolling about in the shallow lagoon and braving the general chaos of the children’s play structure. I watched from the sidelines as Marlo zipped down the slides, dumped buckets of water onto unsuspecting passersby, and activated jets of water in all directions. Every so often, a water tower would unleash a torrent onto the gleeful kids below. A few boys manning mounted water cannons were engaged in all-out warfare. One of them beaned me in the back of the head with a strong stream of water, hollering “Head shot!” in victory. Marlo thought this was hilarious. I thought it was time to go.

Yet we still hadn’t experienced everything. There were other films to see, and new exhibits to come, and things we had missed along the way. Perhaps this is the mystery of the Moody Gardens pyramids: How could we ever see it all? Marlo was quick to provide the answer. We’d just have to come back-again, and again, and again.