Gliding the skies over Marfa 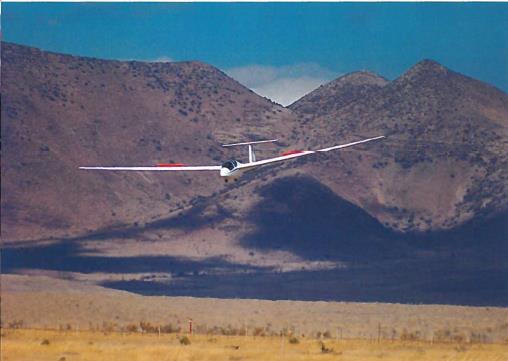 The true art comes in the pilot’s ability to read the sky, clouds, ground, and even the birds, to spot the unseen updrafts and ride them to his heart’s content.

So there I was, 2,000 feet above the ground without an engine or parachute, relying solely upon the wind and a man I had just met to keep me from plummeting to my doom. I was soaring-and loving every second of it.

Most know Marfa for its world-renowned art scene and eccentric sensibilities. However, those familiar with the sport of “soaring” consider this West Texas town to be one of the best places in the world to glide through the air in a sailplane without an engine. The reason for Marfa’s near-perfect conditions is the meeting of moist air from the Gulf of Mexico with dry air from the desert- a phenomenon called the “Marfa Dry Line.” As Burt Compton, my pilot and the owner of Marfa Gliders, put it, “Just like hiking in Patagonia or climbing Mt. Everest or snorkeling in the Cayman Islands, you have to go where it’s the best, and that’s the point of [gliding] in Marfa. It’s legendary.”

Before traveling out west to experience soaring for myself, I had assumed the sport consisted of going up and then gracefully falling down; similar to throwing a paper airplane. But after checking in at the Marfa Airport for my 10 a.m. flight, I realized that there is much more to it than meets the eye.

Soaring is both science and art. The fundamental science has to do with physics and thermodynamics. The sun heats the ground, which then heats the surrounding air and causes it to rise in an invisible column known as a “thermal updraft.” These upward currents are powerful enough to lift the glider higher and higher into the sky, making it possible for a sailplane to stay in flight for hours. As for the art of soaring, the glider itself looks much like a piece of artwork fit for one of Marfa’s many galleries. Further, the true art comes in the pilot’s ability to read the sky, clouds, ground, and even the birds, to spot the unseen updrafts and ride them to his heart’s content.

I must admit I was a bit anxious as we pushed the glider to the runway, but knowing that Burt is a Federal Aviation Administration-certified instructor with more than 7,000 recorded flights helped to calm my nerves. We pushed the glider into position as the ground crew attached a cable between its nose and the tow plane that would haul us up to soaring altitude.

The ground crew helped me into the second seat just behind Burt, who reminded me to let him handle the controls. He already knew me too well. With one final safety check, the ground crew lowered the cockpit dome over our heads, and the sounds of the outside world turned into a muffled hum. The quiet quickly faded as our tow plane’s engine roared and we accelerated down the runway. Within seconds, we were airborne and climbing. The ground crew disappeared from sight, and the airport shrank into a miniature version of itself.

After a few turbulent minutes in the wake of the tow plane, Burt announced that we were ready to release the towrope. This was the moment of truth: We would leave the assurance of an engine and surrender ourselves to the ocean of air.

I heard a loud clank as the cable detached and we slowly peeled away from the tow plane’s path. At this moment, the entire experience changed. What had been a loud thrill ride turned into a gentle glide, with only the sound of wind whispering across the glider’s wings. Any remaining butterflies in my stomach quickly flew away, and I felt an overwhelming calm as I observed my surroundings. With nothing but a thin sheet of plexiglass separating my head from sky, I had never felt so close to flying.

As we drifted, Burt pointed out various mountain ranges and landmarks. I could see the Davis Mountains, the Chinati Mountains, and even the Chisos Mountains of Big Bend National Park almost 100 miles away. To the south, I could also see the entire town of Marfa.

I could have stayed in the sky all day, but after 30 minutes, my flight was over and we began our descent. Our return to the runway was even more thrilling than the ascent as Burt maneuvered the sailplane into one final turn and landed it smoothly in the middle of the runway.

For centuries, folks have marveled at the beauty and grandeur of the wide-open West Texas sky. But even more awe-inspiring is soaring straight through the middle of the expanse, and trusting its winds to bring you back home safe and sound.