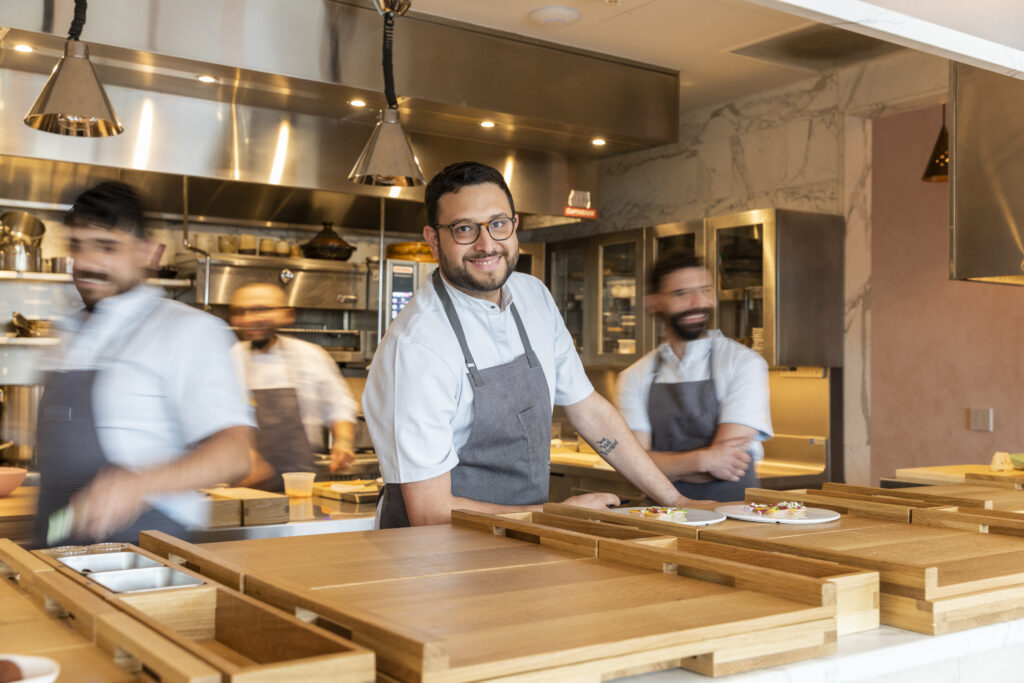 Felipe Riccio is having a moment. Last month, the 31-year-old Houston chef was announced as a semifinalist for the James Beard Foundation’s Best Chef: Texas award and is receiving a lot of fanfare for his team’s beautifully designed fine-dining restaurant March, which, as he says, “tells the story of the Mediterranean” through cuisine.

The restaurant serves food from a different region about every six months. The current menu is inspired by Occitania, a historical region in Southern France where the language Occitan was heavily spoken. Dishes include merluça (a flaky white fish with brandade, caper, bèarnaise) and bolhabaissa (stew with rock shrimp, pernod mussel, and fortified seafood broth). The restaurant has also prepared menus inspired by places like Spain’s Andalusia and North Africa’s Maghreb region.

Perhaps what is most impressive about Riccio and his team is how much they’re testing the bounds of what “Mediterranean” means, with the chef showcasing lesser-known areas like Croatia, Albania, and Montenegro. “Not many people think of those places as Mediterranean countries, but they are,” he says. “There’s so much more for us to explore there.”

A native of Mexico, Riccio was 12 when his family moved to Houston, where he encountered a city full of wide-ranging cuisines and cultures. “I’ve always seen Houston as an incredibly diverse city, whether that’s through food or through culture,” he says. “Being an immigrant and having the immigrant experience was very formative to me.”

Riccio talks with Texas Highways about his unique culinary upbringing, the intense research and development that goes into March, and the beautiful meaning behind the fine-dining restaurant’s name.

TH: Take us through your background and your culinary upbringing.
FR: I was born in Mexico City, and I grew up in Veracruz. My dad is from Italy. He was born in Naples and then moved to Mexico when he was a teenager. There’s obviously a lot of Italian influence in my house and in the food we ate. We ate Italian food at home most of the time, and Mexican food when we were out and about. Both my parents were in the tourism business, so I spent a lot of time around hospitality and restaurants.

TH: When you were growing up in Houston, do you remember the food and restaurant scene being as diverse and respected as it is today?
FR: Moving to Houston, I knew that the U.S. was a melting pot. I was aware of it and having that different background myself, it allowed me to see it much more apparently, especially with food. I would say things like, “Oh, I want to try Ethiopian food,” and you could look it up and find out that Blue Nile is an amazing restaurant for Ethiopian food. And, so, I would tell my parents things like, “Hey, can we go to this restaurant in the city on the weekend?” We would go and eat at these places. Houston itself has been this diverse place for a really long time.

TH: Your restaurant March is getting a lot of buzz right now, but for anyone who isn’t familiar with the concept, how would you explain it?
FR: March is a research-based restaurant that tries to answer the question of “What is the Mediterranean?” We are obviously focusing on that through food. We switch menus and regions about every six months. We close mid-January for a month, and again in mid-August. During that time, we do research and develop the next menu. The world is kind of our oyster with that.

TH: When you say research, what kind of work is involved in that?
FR: It can be as simple as identifying a classic dish and making that classic dish, seeking it out via travel, or trying it at a classic restaurant in Houston. It can be diving into traditional ingredients of the region. A huge part of it is history. But, also, the geography, the language, the customs of the region. There’s so much inspiration we could take from so many different avenues, but we look at cookbooks, historical books, and academic research papers from different universities. Ingredient sourcing is a huge part of it because it allows us to really understand the flavors and the seasons. Then there’s the travel: I’ve spent quite a bit of time traveling in Europe.

TH: When you were coming up with the concept of March, what made you say, “Houston needs this restaurant?”
FR: It was more of, “Does this make sense in Houston? Is this something that will do well here?” It’s definitely a passion project, but we had to ask, “Can Houston get behind this?” I once read this fact—and I don’t know if it’s still true—but it said that Houstonians dine out like four times a week. The fact that Houston has all the entertainment you could imagine: the opera, the ballet, the symphony, the zoo, every single major league sport you can imagine, but we still see going out and eating as a main source of entertainment. I think that’s amazing. Knowing that Houstonians dine out a lot, that it’s a big form of entertainment for them, and the fact that so many people who love food and travel also live here, we felt comfortable that people could get behind the restaurant.

TH: Are there any other Texas restaurants doing things right now that are just like that you’re inspired by?
FR: Definitely Mixtli in San Antonio. They’re doing something similar to us, but they are looking at all of the different regions and places in Mexico and the gastronomy. Mexico has an incredibly diverse ecosystem, literally from high desert to deep jungles, it exists in Mexico.

TH: What is a story you still want to tell at March, or what’s on your mind about what could be next?
FR: We’ve definitely been regionally focused, but there’s so much more historically we can look to, whether that’s the Venetian Republic or the Kingdom of Two Sicilies. You have places in the Mediterranean that people don’t even think about as the Mediterranean. There’s still a lot to be explored, and that’s very purposeful.

The word “march,” the name for the restaurant, is actually an Old English word. A march is a piece of land at the boundaries of the confines of your own territory. This borderland. And in these borders, these frontiers, these edges, the greatest biodiversity exists in ecology. It’s called the edge effect. You have trees and different grasses and different flowers and mushrooms and all these things. So, if you look at that in ecology, it happens all the time, whether it’s the shore, the ocean, the desert, on the edge of an oasis. March, our restaurant, is exploring the series of marches that exist in the Mediterranean, where the greatest biodiversity of food and culture and language and ideas exist.