Roadside Oddity: The Statue of Old Yeller in Mason

Located at the M. Beven Eckert Memorial Library, the monument to the book and Disney film has its roots in the Hill Country town 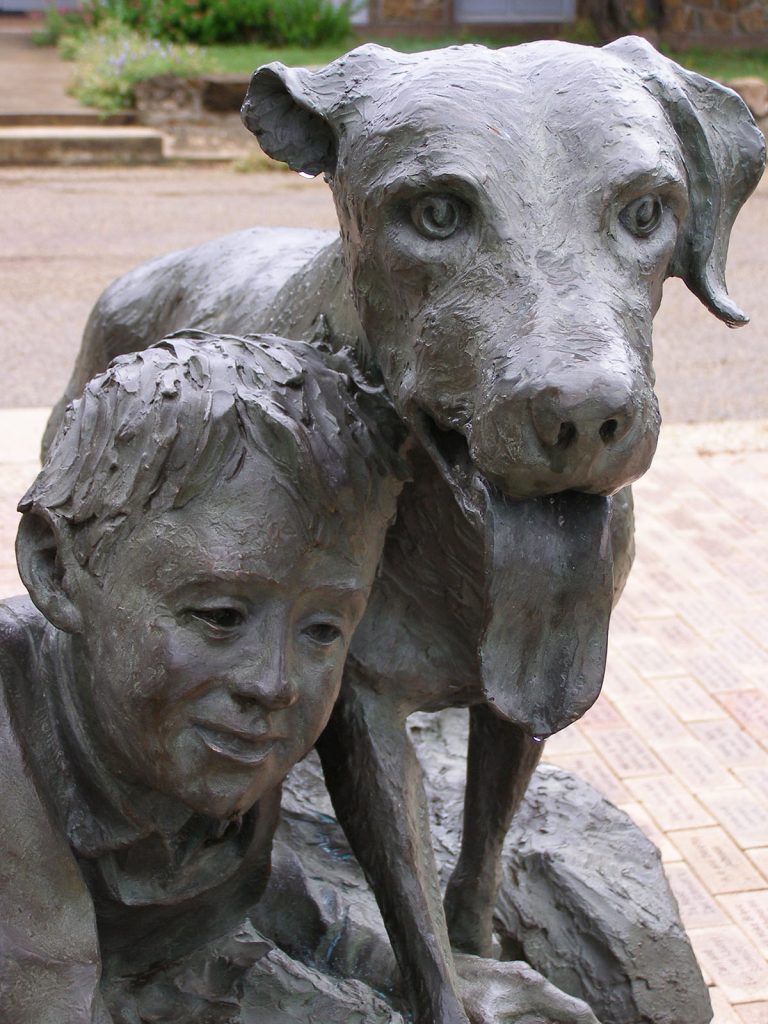 “We called him Old Yeller. The name had a sort of double meaning. One part meant that his short hair was a dingy yellow, a color that we called ‘yeller’ in those days. The other meant that when he opened his head, the sound he let out came closer to being a yell than a bark.”
– From Old Yeller by Fred Gipson

There are many good reasons to visit Mason, a German-rooted Hill Country town that stirs a deep sense of place and a longing for simpler times. Home of the Texas state gemstone, blue topaz, Mason harbors another gem: the bronze statue of two literary icons, Travis Coates and his fiercely loyal companion, Old Yeller, on the imaginary banks of Birdsong Creek.

The life-size Old Yeller statue sits prominently in front of Mason County’s M. Beven Eckert Memorial Library, 410 Post Hill St. It’s a fitting spot for a timeless tribute to a beloved children’s novel and its prolific author and Mason native son, Fred Gipson, who wrote 12 books, several screenplays, and 175 published articles before passing away at his ranch near Mason in 1973 at age 65.

“Old Yeller was written in between books, almost on a lark, and it’s one of the easiest things my dad ever wrote,” says Fred’s son, Beck Gipson, who resides in Kerrville. “He did it in six months, yet he was a slow, methodical writer. The success floored him.”

Published in 1956 when Beck was 11, Old Yeller remains one of the saddest “boy-and-his-dog” tales ever written, a coming-of-age saga set in post-Civil War Texas in the hardscrabble Hill Country around Mason. Disney Studio’s faithful film adaptation, Old Yeller, released Dec. 25, 1957, and premiering at Mason’s 1928 Odeon Theater, was an instant hit that still brings audiences of all ages to tears.

“The Disney film is a remarkably good adaptation of the book,” says Beck, adding that his dad co-wrote the screenplay. “It was the first serious Disney drama, with a tough but truthful ending. Its timelessness is likely due to the fact that the book was read in school by the entire baby boom generation, and it’s still being read.”

The novel was inspired by the true exploits, passed down to Fred by his grandfather, of a frontier dog named Rattler. For many, Old Yeller transcends children’s literature. The fictional black-mouth yellow cur, a fearless and protective Texas hunting breed that Gipson likely had in mind as Old Yeller, seems as real as any living dog. And so does the statue of Old Yeller—a lop-eared mongrel with a faraway gaze and a long, drooping tongue.

“It’s a remarkable piece of work of what that breed looks like,” says Beck.

The Old Yeller bronze—the only literary dog statue in Texas and one of a few in the nation—is a masterwork by Garland Weeks, a Western artist and sculptor who lives in Lubbock. It was unveiled on Oct. 2, 1999, at a dedication ceremony in front of the Mason library marking the first of many Old Yeller Day festivals.

You can relive the unveiling ceremony, featuring then first lady of Texas Laura Bush and Beck as guest speakers, in a Texas Country Reporter episode narrated by Bob Phillips, who observed, “It’s been said the whole world wept when Old Yeller died.”

“I did share Old Yeller with my fourth graders,” confided Bush, a former teacher, at the unveiling, “and when we got to the sad part, I don’t know who started crying first—them or me.”

“Because it is a book that is read by young people,” said Beck in the episode, “it’s quite likely that it may be the first book that they read that makes them cry,” adding that a book that creates that kind of emotion “can stick with you forever.”