Once featured in 'Vogue,' the sculptural structure was put up for sale earlier this month 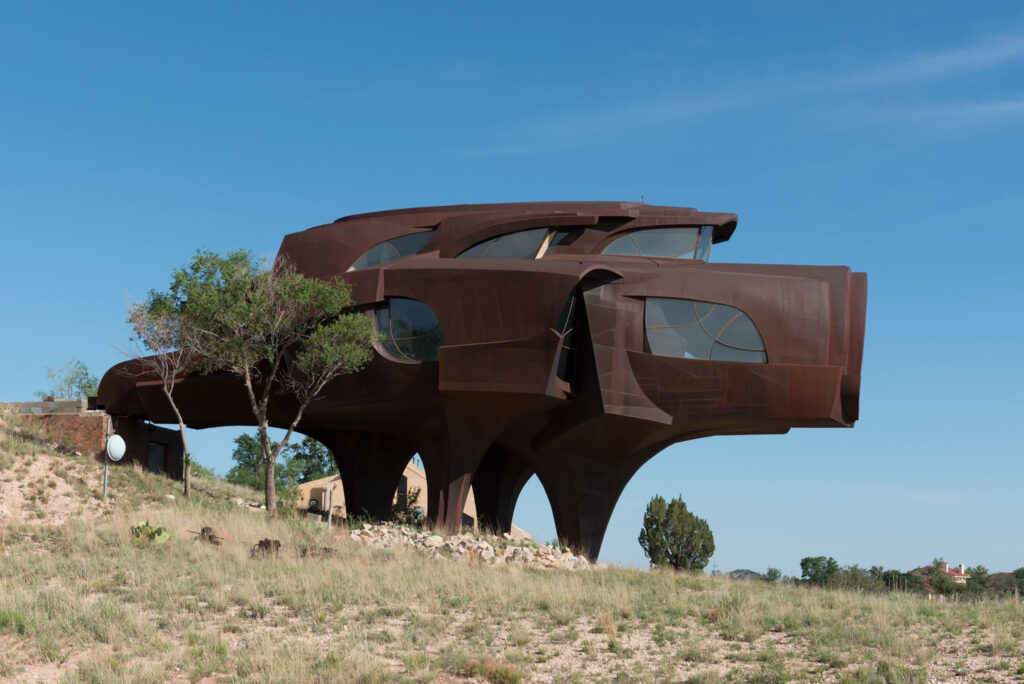 About three weeks ago, a flurry of reports came out from the Lubbock area about the wacky and wild Robert Bruno Steel House. The hulking four-legged steel structure that looms over Ransom Canyon east of Lubbock was either for sale or just sold and about to be turned into a VRBO, or possibly both.

The confusing spate of reports, radio broadcasts, and real estate listing sites maintained that the vacant structure—in recent years the site of a Vogue photo shoot and a cameo in Solange’s “Cranes in the Sky” video—went on the market for $1.75 million and remains available at that price today. That price tag is around 15 times the low-six-figures appraisal rate for the structure. But the nearby houses on which that number is based have not had German film crews tromping through and solemnly intoning on the area’s bleak beauty and Bruno’s daring structure.

It turns out its new owners, Courtney and Blake Bartosh, have both options on the table. “If it sells, great,” Courtney says, “But if it doesn’t, we intend to do what we always planned with it, which is make it a VRBO or whatever you want to call it.”

Supply chain issues are delaying the interior restoration of the property, she adds. “We hoped to have it done inside of a year, but it might take a little bit longer than that.” (If so, expect rentals to begin around this time next year.) Meanwhile, the Bartoshes have set up The Robert Bruno Steel House VRBO Facebook business page with progress reports on the livable sculpture as they prep it for short-term rentals while having it on the market.

As a child growing up in Houston, I can remember how impressed I was when I discovered that Europe’s grand cathedrals were not built in a year. People would begin work on such an immense project knowing full well that even their grandchildren’s grandchildren would not see it to completion. Barcelona’s Basílica de la Sagrada Família is a modern example: Its groundbreaking came in 1882, and its construction is still underway today. Builders hoped to have it done by 2026, but thanks to COVID-19, the year of its completion is anybody’s guess.

And so it went with the Bruno House, albeit on a much smaller scale. Always working alone with quarter-inch steel plating and salvaging materials from work sites, Bruno started the project when he was a young professor of sculpture at Texas Tech. The general frame of the house—which looks like a quadrupedal space monster—came together fast after the groundbreaking in April 1975. The devil would be in the details.

The project first began attracting media attention around October 1976, at which time Bruno, described by a reporter as “a 31-year-old husky professor of architecture,” said he hoped to be finished by 1980.

“If I were to say to you, ‘What does this look more like, a cow, or a sculpture?,’ you would probably say a sculpture, so that’s really what it looks like,” Bruno told the reporter, who in turn described it as a “rusty flying saucer supported by four stout legs.” (To me, it favors a space hippo warrior robot.)

No one, including Bruno, used the word “house.” Indeed, nobody but Bruno has ever lived inside it, and then only for the last few months of his life. (He died in 2008.) To Bruno, who studied sculpture at Notre Dame, it was a work of art you just happened to be able to reside in. Far more importantly, it was to be worked on.

Details about the living arrangements are just as sci-fi. Each of the four legs is functional: One is to be a library with books surrounding a spiral staircase, another an aquarium. There are two interior videos to give you a sense of the structure.

In 1976, you could already sense things were getting out of control, time-wise. “When I first started doing this project, I had a general idea as to the size and shape of it, but the smaller patterns do evolve as I work on it,” he said. “So, there is an awful lot that will be in this that I haven’t conceived yet.”

A statement like that leaves room for nothing short of the infinite, and five years later, when the New York Times reporter Peter Applebome checked in, the finish line was advancing farther and farther into the future. The evolution of those myriad smaller patterns negated all the progress towards “completion” he made since 1976, when he estimated completion in 1980. And here we were in 1981 and Bruno was telling Applebome it was only two-thirds finished. And so on through the rest of the ’80s, all of the ’90s, and most of the aughts.

Along the way, Bruno failed to get tenure at Texas Tech, which left him and his wife, Pat, scrambling for income until she settled on selling agricultural irrigation supplies. (In that poverty-stricken interim, they lived in a $200/month apartment rather than Bruno’s creation.)

There were squabbles with the neighbors. Photographs place the house in what seems like the splendid isolation of raw South Plains canyonlands, but in reality, Ransom Creek is a prosperous bedroom community of 1970s ranch houses and the occasional McMansion. And as ever, when there is a structure so prominent and unusual in such a conventional neighborhood, some of Bruno’s neighbors disliked the way they thought his creation failed to blend in with their 1970s ranch houses, or thought that he left the worksite in disarray on occasion.

Bruno was able to power through that, and at some point, he seems to have given up on even the idea of finishing it, which bothered him not in the slightest. It’s what Bruno did with his time, and if someday somebody wanted to live in it, fine. He would make it as beautiful for them as he could. As for Bruno, he’d had the time of his life working on the place.