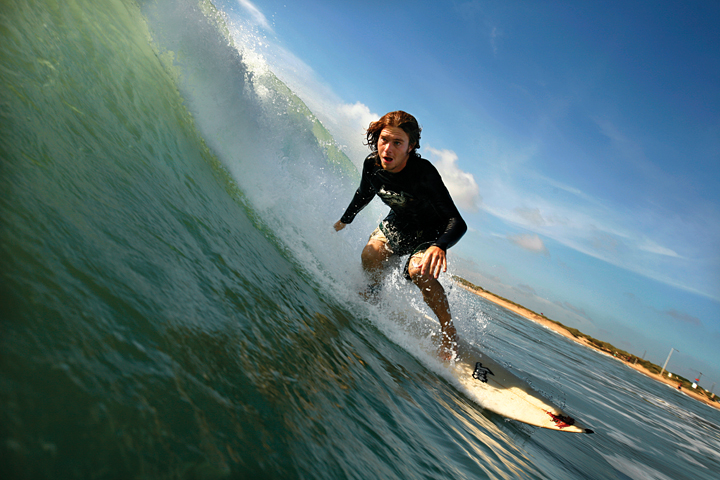 As a teenager, I spent a good part of each summer strolling the sand at Galveston. On the radio, The Beach Boys sang about California girls, and Hollywood movies always featured perfect waves and Pacific Ocean sunsets, but that didn’t make surfers on Texas beaches any less cool. Despite surfing’s influence on the pop culture of my youth, I never got around to trying surfing myself.

As an adult, I love the beach as much as ever, and my kids fell under the ocean’s spell at an early age. And they wanted to surf. After trying boogie boards and body surfing, we discovered that Texas has surfing camps and lessons for all levels and ages. The instructors confidently vow that just about anyone can surf, and they deliver on that promise.

We jumped in with both feet at Texas Surf Camp in Port Aransas. Under colorful tarps on the beach, instructors group youngsters by age and start with stretching and basic instruction. Surfer Tristan Richards takes a pack of teens, including my 15-year old daughter and her friend, and shows them how to lie on the board, face down, feet just off the back, a hand on each side. He explains how to watch for a wave, paddle until it catches you, and stand up. Everyone assumes a wave-riding stance on the sand to determine whether they favor the left or right foot (the latter are known as goofy-footed). Before long, the kids grab colorful foam boards and dash into the warm water. Surf camp provides immediate gratification.

Poised belly-down on the board, neck craned over one shoulder, campers learn to ignore waves that will remain mere swells, which will lift but not carry the board. Instead, they’ll choose waves that rise and curl over into foam, speeding a board along. They also learn to pick the right moment to start paddling like mad; if they paddle too slowly, the wave will roll past without them.

Catching a wave proves the biggest challenge the first few days of camp. Standing up in one smooth motion on a moving board also presents a challenge, but most people get reasonably close in a day or two. Everyone in my daughter’s class masters it with little difficulty.

Later, I get my chance. I spend more time in the water and less on the board than the kids, but it doesn’t take me long to figure out that no one notices.
They’re too busy catching their own waves.

Surfing, you see, quickly becomes addictive. After catching one wave, surfers want to catch another-one that’s bigger, or that goes farther. Then one more, and still another, and just one last wave, until an entire afternoon is gone and no one has uttered the words ‘I’m bored’—though I may have whimpered ‘I’m tired’ a time or two.

For those without a week to spare, or families that want to learn together, individual or small­ group lessons are an alternative. Texas Surf Camp permits one or several days of attendance. (Two days of lessons proves my limit.)

South Padre Surf Company offers one-day camps and private lessons year round for all ages, in addition to weeklong summer camps at the island’s Isla Blanca Beach Park. SPSC co-owner Gene Gore brags that the park has the best surf in the Gulf of Mexico. He teaches more adults than kids. “Nothing like seeing your kid’s face when you tell them you went surfing,” Gore says, a statement I can verify. “Nearly everyone is up and riding within the first few waves, and our goal is for you to surf on your own by the end of class. We have a one hundred percent success rate.”

Mylinda Carter of Island Surf Camp in Galves­ton, which offers hourly and daily lessons year round, also produces savvy surfers. “I promise you will ride that day,” she says. “We have smaller classes for that very reason, usually one instructor for every two or three students.”

Another company, South Coast Surf and Fit­ness, offers group and private lessons in Galves­ton and Surfside, and still another Galveston outfitter, C-Sick Surfin’, gives two- to three-hour lessons for up to four people. At C-Sick, under the tutelage of bearded and tanned Brian Jarvis, a surfer since the Sixties, you’ll learn to surf and to “wipe out and look cool doing it.”

There’s no shame in wiping out—trust me, every­body does it. But focus on success, urges experi­enced surf instructor and international adventurer Kimery Duda of the Austin-based Expedition School. “Envision yourself on the wave,” she says. “Once you get up and ride, it is such an incredible feeling. There is a magic in it.”

That magic is part of the reason surfing is a booming pastime—more than 2.4 million Ameri­cans surf, according to action sports-research firm Board-Trac, spending $3.3 billion on surf­-related merchandise. The boom isn’t unique to Texas; it includes unlikely spots such as Lake Michigan, and behind barges in ship channels nationwide (not for the inexperienced).

In Texas these days, there are at least two reasons that more boards are hitting the water. First, surfers no longer scoff at Texas waves, in part thanks to Texas Surf Camp’s Morgan Faulkner himself. He holds two national surfing titles, 22 Texas titles, and other assorted accolades; is a former member of the U.S. Surfing Team; and is now a professional competitor in the World Qualifying Series. Faulkner credits much of his success to learning on the unpredictable waves off Port Aransas. “If you can surf in Texas, you can surf anywhere,” he says. While no one is likely to confuse Texas surf with that of Hawaii or California, there are plenty of waves to ride—and the water is warm enough that surfers rarely need a wetsuit.

Second, folks are realizing you don’t have to be young, buff, and a little rebellious to surf. Surf shops do cultivate that image, and it probably attracts a fair number of teens to the sport. But there are plenty of, ahem, mature surfers out there, and there’s plenty of ocean for everyone. Besides, the worst that can happen is you’ll spend an

Surf shops do cultivate that image, and it probably attracts a fair number of teens to the sport. But there are plenty of, ahem, mature surfers out there, and there’s plenty of ocean for everyone. afternoon in warm waters, float­ing on a board (tip: sunscreen those hind parts!) and rocked by waves, with the sound of the surf and the occasional fish for company. Best case, you’ll catch a nice wave, get to your feet, and ride it right onto the beach, whooping all the way.