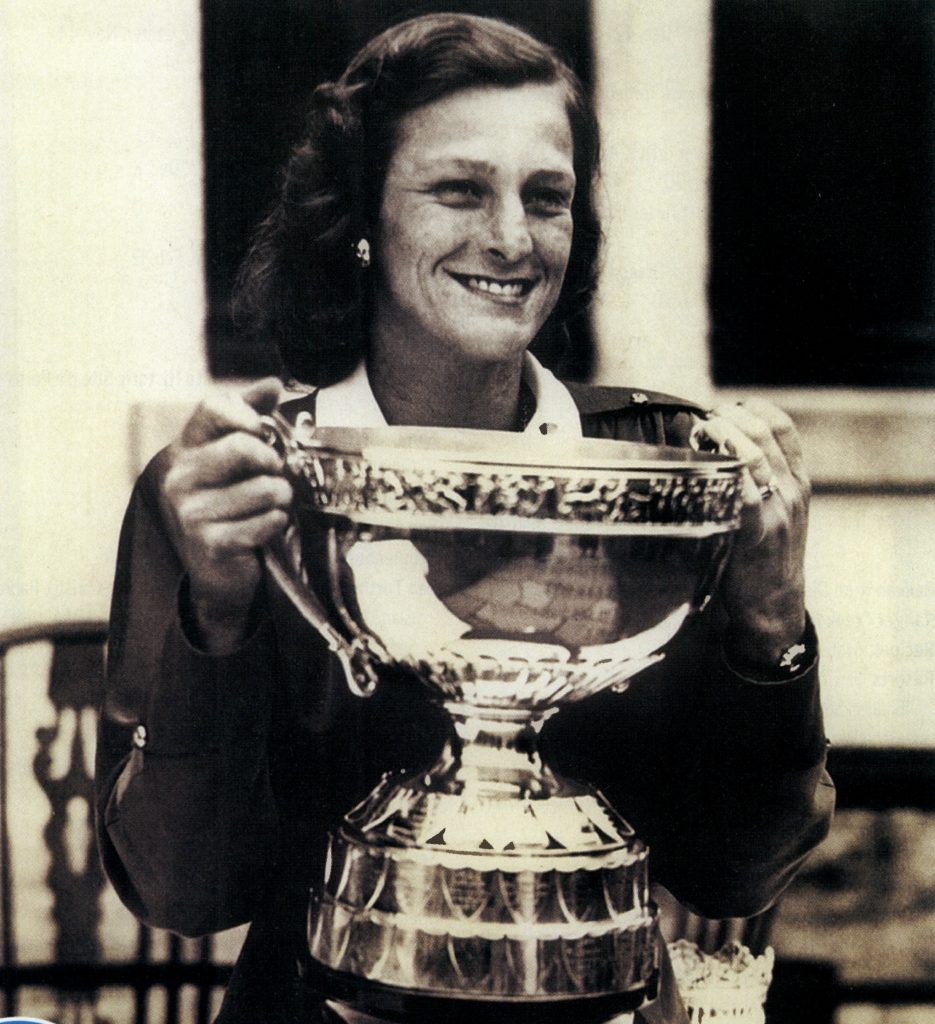 “The Babe is here. Who’s coming in second’?” quipped Babe Didrikson (1911-1956) as she confronted her track-and-field competitors at the 1932 Olympics in Los Angeles. With her cropped hair, bronzed limbs, and lanky, muscular build, Babe appeared the quintessential tomboy—all smack-talk and swagger. Yet she possessed the skills to back up her words. She had honed her athletic abilities while growing up in Beaumont, the sixth of seven children of Norwegian immigrants. She practiced hurdling by leaping over her neighbors’ hedges, performed gymnastics on makeshift equipment in the backyard, and signed up for every sport open to women at Beaumont High, distinguishing herself in basketball, baseball, swimming, volleyball, tennis, and golf, among others.

Though her parents had named her “Ella Mildred,” her prowess on the neighborhood sandlots earned her the moniker “Babe,” after baseball Hall-of-Famer Babe Ruth. Babe set her sights on greatness at an early age, claiming, “Before I was in my teens, I knew exactly what I wanted to be when I grew up. My goal was to be the greatest athlete that ever lived.”

Babe got her first break when her performance at a high school basketball game caught the eye of a Dallas insurance company. The company soon hired her as a secretary—not for her typing skills, but so she could represent the firm at Amateur Athletic Union (AAU) competitions. She emerged as the star player of the company’s basketball team, the Golden Cyclones, earning All-American honors three times and leading the Cyclones to a national championship in 1931. For the 1932 AAU Championships, Babe dominated the competition, coming in first place in five events and tying for a sixth, and set world records for the high jump, javelin throw, baseball throw, and 80-meter hurdles. Her success qualified her for the Olympics in Los Angeles later that year, where she won gold medals for the 80-meter hurdles and the javelin throw, and a controversial silver for the high jump. (She had tied for first place, but the judges found fault with her style of launching herself headfirst over the bar—now standard practice.)

Babe became the darling of the media, not just for her accomplishments, but for her braggadocio and willingness to speak brazenly to the press. When asked by one reporter if there was anything she didn’t play, Babe replied, ”Yeah, dolls.”

Reporters dubbed her ”Wonder Girl,” and the Associated Press named her “Female Athlete of the Year” six times. After the Olympics, Babe entered the vaudeville circuit, barnstorming the country with various acts, even performing as the sole female player on an all-male baseball team and challenging the winning Kentucky Derby horse to a footrace.

In 1935, Babe developed a passion for golf. After about three years of practice, she boldly went where no woman had gone before: the Professional Golf Association’s Los Angeles Open. There, she partnered with professional wrestler George Zaharias, who soon became Babe’s husband and promoter.

In the 1940s and 1950s, Babe rose to prominence as a golfer, winning 17 consecutive amateur tournaments. Explaining the secret of her powerful drives, she cracked, “It’s not enough to just swing at the ball. You’ve got to loosen your girdle and really let the ball have it.” After turning professional in 1947, she soon established herself as the top golfer of the Women’s PGA and Ladies’ PGA, which she had helped to establish.

Babe died of colon cancer in 1956 and was buried in Beaumont. In 1999, the Associated Press honored her with the title ”Woman Athlete of the 20th Century,” and her success has paved the way for other women to embark on sports careers.

“Women athletes everywhere owe Babe Didrikson a debt of gratitude,” says Houston Chronicle sportswriter Richard Justice. “She sent a message that women could be just as athletic, just as competitive, and just as accomplished as any male athlete. Babe moved the bar.”

From the December 0209 issue