Zoom With A View 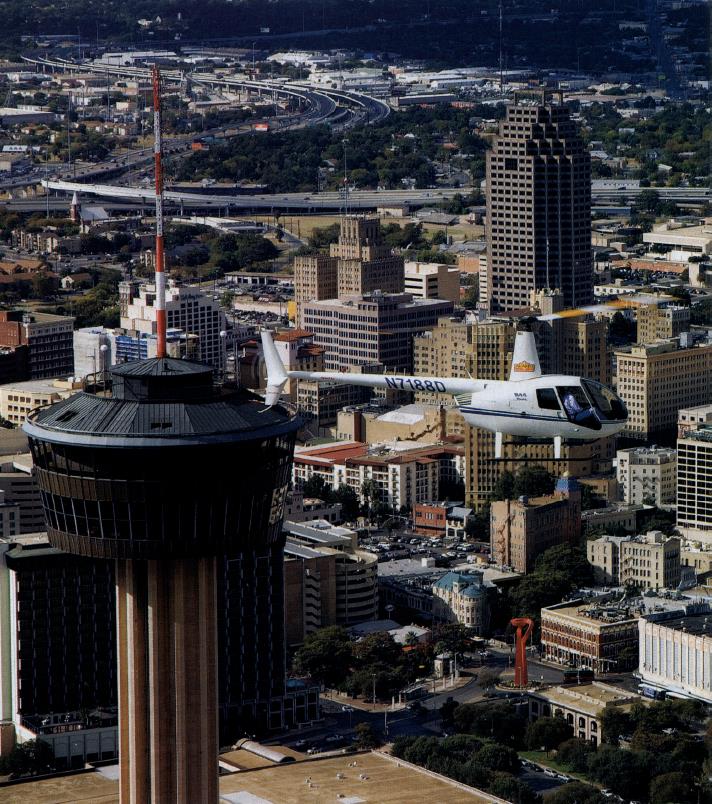 Alamo Helicopter Tours’ Randy and Stacy Riggs and their Robinson R44 Raven provide a spectacular
panorama of metropolitan San Antonio and beyond.

The big bird hovering above me turned out to be a white raven. More precisely, a Robinson R44 Raven, a pearly-white helicopter with blue pinstriping. After circling Stinson Municipal Airport, just south of downtown San Antonio, it descended and touched down on the tarmac about 25 yards away, still close enough to ripple my shirt with its updraft. The high pitch of the engine turned deeper, the blades slowed their rotations against the blue of the sky.
The raven had landed.

A young couple emerged from the cockpit—all smiles—but with a look of forlorn eagerness on their faces, which made it plain that they’d actually prefer
to be back up in the air.

Such bittersweet expressions are typical after a flight, according to Stacy Riggs, co-owner of Alamo Helicopter Tours. Waiting on the tarmac, she  welcomes the passengers when they land and escorts them into the terminal building while hearing their enthusiastic post-flight responses. “I really love seeing their faces as their feet touch the ground again,” she says.

After sending the couple on their way, she escorted me to the waiting helicopter and buckled me in. The blades above began to chop the air with thick whump whumps, as the engine revved. The Robinson R44 Raven is a powerful machine, with 225 horsepower and the ability to climb quickly, while cruising the sky at about 120 miles per hour.

But when it lifts off, it feels like it’s levitating. Up, up, up—with no strong G-force pulling passengers into their seats, and none of that pressurized cabin silliness that clogs your ears. It’s just a peaceful sensation, something akin, I would imagine, to soaring around on a flying carpet.

Pilot Randy Riggs, Stacy’s husband and Alamo’s co-owner, explains through the headset that the Raven is perfect for touring. With wraparound windows offering panoramic views of the endless horizon, the helicopter becomes something of an airborne classroom. The bird’s-eye view of San Antonio looks familiar, but oddly foreign. I can still see landmarks such as the Tower of the Americas, the AT&T Center, and the Alamo, but there’s a curious feeling that goes with looking down on them. They appear less majestic from above, but also less individualistic and more like eclectic building blocks of a cohesive
city. Randy points out other sites and hovers a moment over the River Walk, which snakes through downtown.

After awhile, the Raven heads back to the airport, touching down with a barely perceptible bump. When Stacy meets us, I’m sure there’s a happy but
forlorn expression on my face. I’d certainly like to be back up in the sky.

Once we’re inside the terminal building, Randy and Stacy explain that although they opened Alamo Helicopter Tours last April, they’ve been in the air-tour
industry for decades.

Most recently, they lived in Tennessee and gave helicopter tours there. When Randy began working as a commercial pilot for the oil industry in the Gulf of
Mexico, they needed to move but wanted to keep working in the tour business.

“San Antonio is a perfect spot,” says Stacy. “The weather usually cooperates, and it’s very pretty here. Last spring, we got a lot of calls to fly out to the Hill
Country and see the wildflowers. I just hope more will be in bloom this spring.”

Randy hopes so, too, because the Hill Country tour is his favorite flight. “I like getting away from the city and seeing more of the rugged terrain. We’ll
even see wildlife on those longer flights. It’s very peaceful, very relaxing,” he says.

Alamo Helicopter Tours features five set flights, from a quick 12-mile flyover of the immediate area, including nearby Mission San Juan Capistrano ($40 per person) to an 80-mile excursion to the Hill Country ($279). Randy indicates that there’s usually leeway to see other, specific attractions. “We try to be very flexible,” he says. “If we can work it out, we will.”

As for first-timers, who may be nervous about flying, Randy says their reservations usually disappear pretty quickly once they get airborne. “I had a young boy out here for his brother’s birthday who didn’t want to open his eyes. I said, ‘You’re missing something incredible,’ and asked him to open just one eye. He finally did, and he was hooked. I love taking first-timers up because I get that experience right as it happens.”

Stacy says that her experiences with really nervous first-timers are a bit different: “I deal with them beforehand and convince them that it will be a smooth ride. Like the couple who were up before you. Her husband just flew in from Iraq. He’d been e-mailing me to set this flight up for her birthday. But she told me when she got here that she didn’t even like flying. But when she came back—well, you saw how excited she was.”

The Riggses say they started the business thinking their customers would be mostly out-of-town visitors. However, curious and enthusiastic locals have proven to make up roughly half their clientele. So they’ve been offering a popular 15 percent discount for San Antonio residents. “We want our neighbors to come and fly with us,” says Randy. “It’s not like work. It’s what we love to do.”