5 Texas Cities Where You Can Discover Your Inner Science Geek 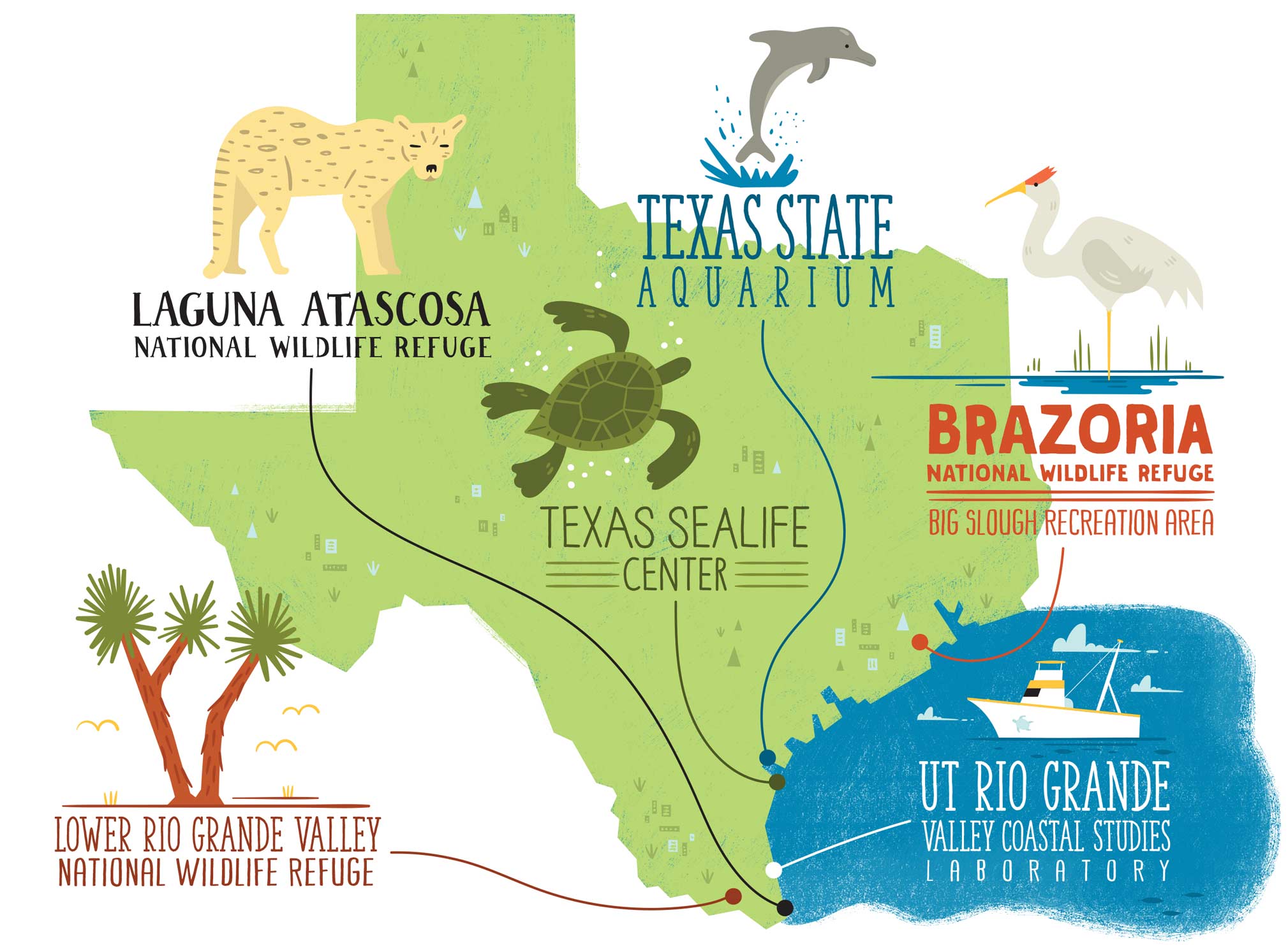 The Texas Gulf Coast, where the North American continent descends into the Gulf of Mexico’s salty waters, harbors a steamy mix of marshes, bays, beaches, and ocean. Over the years, scientific institutions and conservation groups gravitated to this rich environment to establish laboratories, preserves, rescues, and aquariums dedicated to studying and protecting its diversity of life. We know most travelers escape to the coast to while away time on the beach, but we also know that such experiences take on greater meaning with a little educational insight. Here we’ve put together a science-by-the-sea road trip—a syllabus for discovering the most scintillating of salty facts.

Many towns on the Texas coast harbor aquariums and science centers that explore the local environment.

Texas Sealife Center, at the entrance to Packery Channel Park on North Padre Island, rescues and rehabilitates sea turtles and other wildlife. On guided tours, visitors learn about this important work as they stroll among tanks of swimming sea turtles, bird enclosures, and native vegetation. Inside, a colorful mural portrays the actual size of the five species of sea turtles, from the smallest, Kemp’s ridley, to the largest, leatherback, whose shells reach lengths up to 6 feet. Another exhibit explains environmental hazards marine creatures face, including entanglement in debris, the subject of much scientific research. Volunteers share lots of turtle trivia, such as how a sea turtle can hold its breath for several hours while napping on the ocean floor.

The lab’s displays include some 2,000 seashells, skeletons of dolphins and manatees, a sperm whale skull, and mounted dolphin and sea turtle specimens. 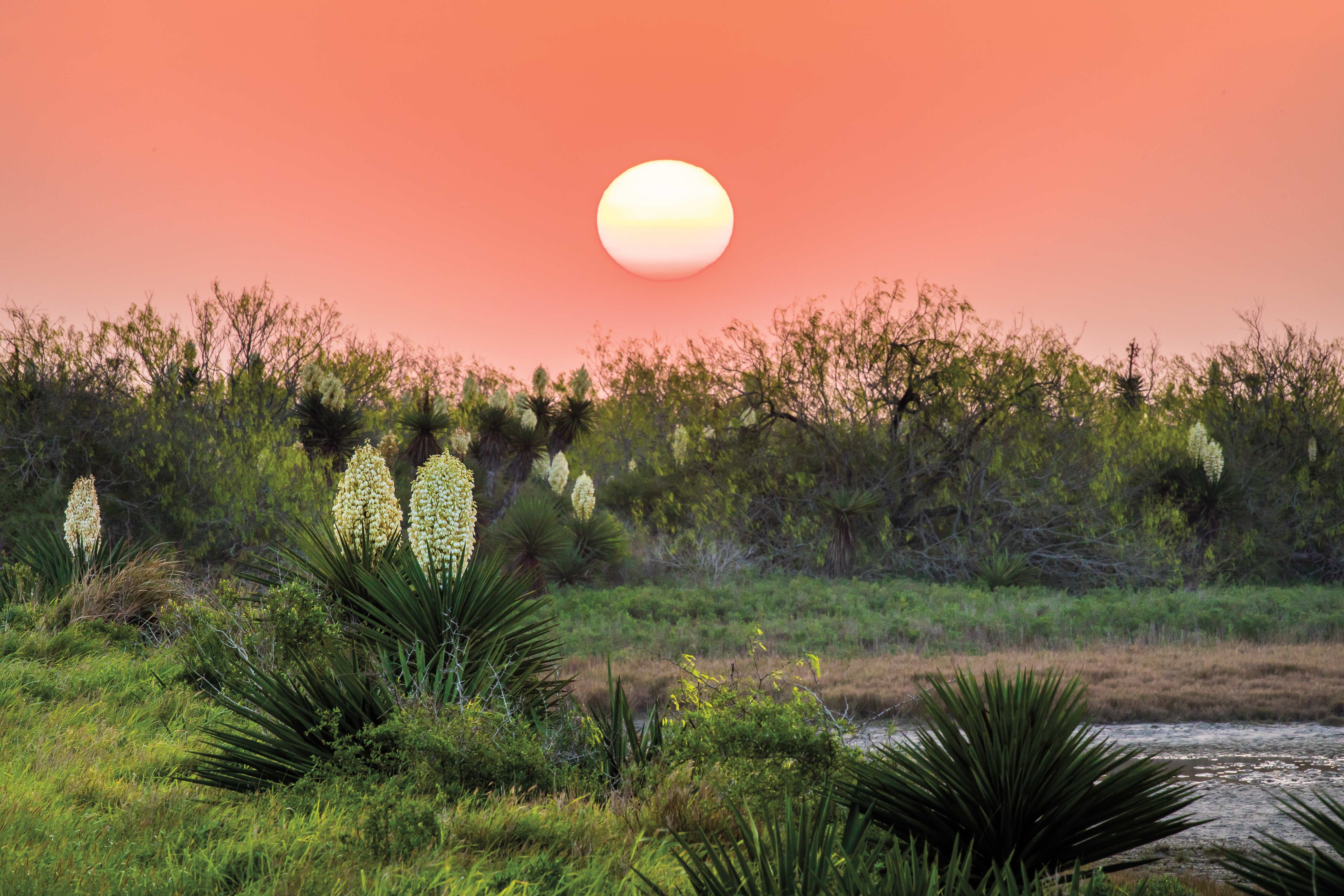 Another in-the-field experience happens north of Brownsville at Laguna Atascosa National Wildlife Refuge. The refuge boasts more recorded species of birds than any other of its type. Three-hour guided habitat tram tours traverse coastal prairies and thorn scrub forests, and offer the chance to spot birds—including aplomado falcons, reintroduced here in the 1990s—as well as deer and alligators. The refuge’s visitor center provides maps of walking trails and exhibits with a mounted ocelot, jaguar, and aplomado falcon. Also in the visitor center, a 30-minute video explores the topic of ocelots, an endangered species of spotted wildcat. Somewhere between 50 and 80 ocelots survive in the country. 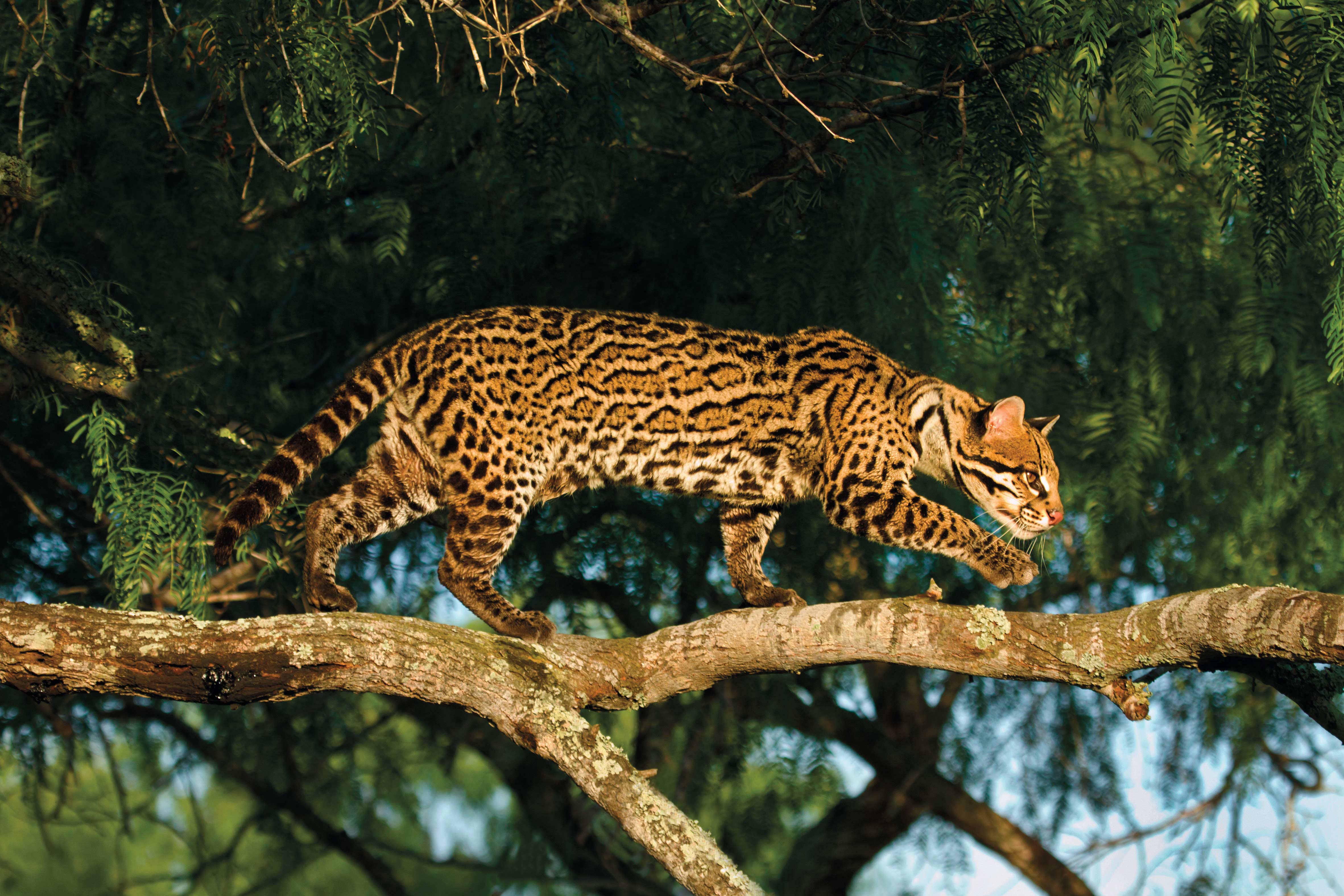 “We have one of the last remaining ocelot populations in the U.S.,” Ranger Marion Mason says. “They live in thorn scrub forest, found only here in South Texas. The tours also have good views of the Laguna Madre, a rare hypersaline, or really salty, lagoon that’s important as a nursery for many fish in the Gulf.”

At the Texas-Mexico border, the Lower Rio Grande Valley National Wildlife Refuge harbors a number of species rare in this country: a community of sabal palms populated by equally rare creatures such as the southern yellow bat, and century-old yuccas called Spanish daggers. Loggerhead shrikes, a resident bird species, impale insects and small reptiles on the yuccas’ sharp points to dine on later. The refuge shares a visitor center with the Santa Ana National Wildlife Refuge, which provides maps, brochures, wildlife checklists, and information on trails.

In Corpus Christi, the Texas State Aquarium offers lessons on everything from sandy environments and mangrove habitats to deep-water species like moon jellies and giant Pacific octopi, and Caribbean coral reefs found at the Flower Garden Banks National Marine Sanctuary 115 miles off the Texas coast. A tank with a replica of an offshore oil platform shows how these underwater structures provide food and shelter for a variety of marine life, including sand tiger sharks, stingrays, and several species of fish.

Sharks suffer from more than a little misinformation and stigma, and a Texas State Aquarium exhibit titled Saving Sharks helps set the record straight. “Sharks make great ambassadors for the oceans, because folks young and old are fascinated by them,” says Greg Stunz, who studies ocean health at the Harte Research Institute for Gulf of Mexico Studies at Texas A&M University Corpus Christi. “As scientists, we see the attraction as a good way to teach people about the importance of these predators in the oceans and the [importance of] oceans in all of our lives.” 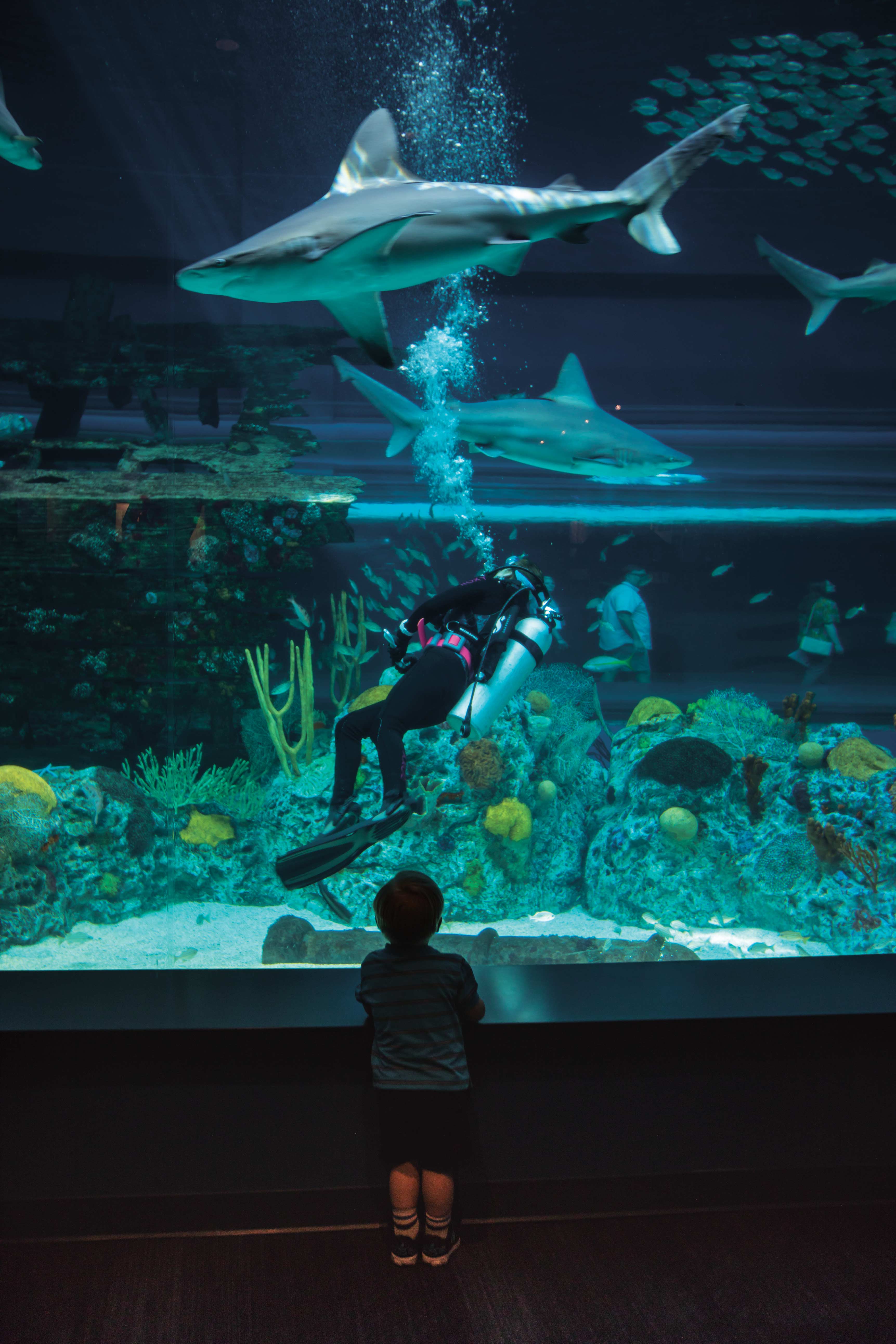 Sandbar sharks and a scuba diver at the Texas State Aquarium in Corpus Christi.

The exhibit includes a life-size great white shark replica, the jaws of a giant prehistoric megalodon shark, and live sharks in a touch pool. Stunz says his favorite exhibit shows how scientists tag sharks and allows
visitors to follow tagged animals in real-time on a large, interactive map of the world.

Visitors watching tagged sharks navigate their watery world can’t help but gain a deeper understanding of these animals, just as other stops on a science-by-the sea road trip foster a greater connection to the Texas coast. More importantly, these educational spots make learning about the coastal environment fun. Even better, there won’t be a test.