An oasis in the West Texas desert: Chandler Ranch on Independence Creek 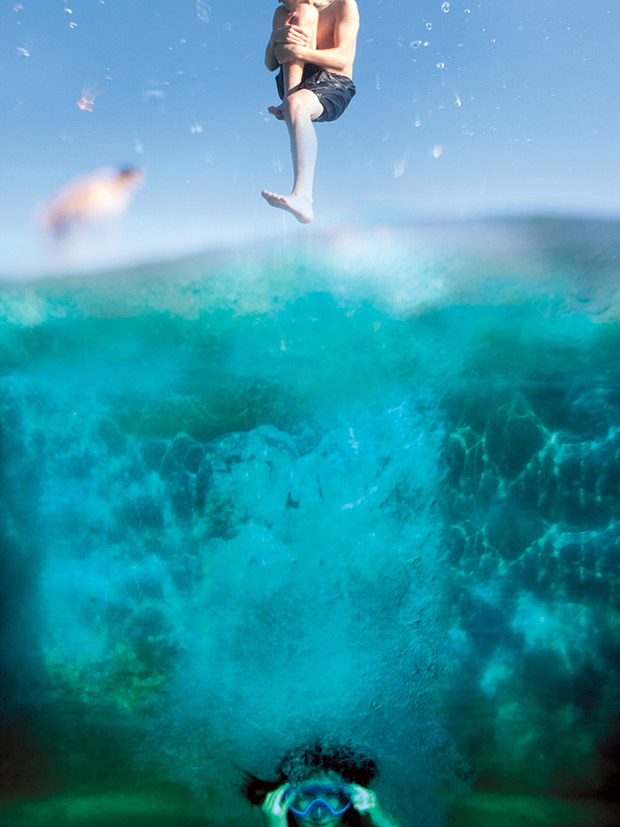 Set among the low-desert mesas of the Pecos River watershed, Chandler Ranch sparkles with the spring-fed waters of Independence Creek and a spring-fed swimming pool.

We were just a minute or two from pulling into Chandler Ranch when a roadrunner popped out of the roadside scrub and ran alongside the car for a few seconds. I tapped the brakes, and the kids strained their necks from the backseat to watch as the spindly bird overtook us and darted across the dirt road before disappearing into a thicket of mesquite. It felt like a good omen.

Chandler Ranch is at 535 Independence Creek Road, off State Highway 349 between Sheffield and Dryden in Terrell County. The six-bed cabin costs $300/night; the two four-bed cabins $250/night. The all-inclusive rate includes meals, paddling equipment, fishing pond access, and the use of a mule ATV.

Charlena Chandler chronicles the history of the Chandler Ranch in her book On Independence Creek, The Story of a Texas Ranch (Texas Tech University Press, 2004).

“Oh, you saw a roadrunner?” asked the Chandler Ranch cook, Richard Jasso, later that evening as he welcomed us with a dinner of hearty chicken enchiladas. “There are a lot of them out here. The Indians used to say it’s good luck when a road-runner crosses your path.”

I imagine people have felt lucky for thousands of years when arriving at this spot on Independence Creek, a ribbon of pristine spring water running through the rough and rocky West Texas desert. Back in the late 1800s, a young cowboy named Charlie Chandler fell in love with this valley and started buying land to build his own ranch along the creek and its confluence with the Pecos River. Today, Charlie’s descendants welcome guests to explore the ranch’s countryside with a home base of comfortable cabins and satisfying ranch cooking.

“The Chandlers have been here over 100 years on this very piece of land where you’re sitting today,” said Joe Chandler, Charlie’s great-grandson, who reopened the ranch to the public in 2014 after it had been closed for three decades. “Whatever you decide you want this ranch to be for you, it can be. Some people just want to sit right here and be peaceful. There are a lot of people who love the beauty and the wildlife of it. And some want to be a real part of it—the swimming, fishing, canoeing, kayaking, exploring.”

It’s the water that sets this place apart. Over a weekend stay, we kayaked the Pecos River for a two-hour trip, marveling at towering orange limestone bluffs and stopping at the confluence with Independence Creek to dip in the cool, fresh water. We cast fishing lines in the creek and in ponds stocked with bass, perch, and catfish. We swam for hours in the spring-fed swimming pool at the ranch head-quarters, with a peaceful view of the gurgling creek and surrounding hills. And we lounged beneath the shade of an oak grove, sipping sweet iced tea and spotting birds like painted buntings, scissortailed flycatchers, and black-chinned hummingbirds.

Set in a transition zone between the Edwards Plateau, Tamaulipan Thornscrub, and Chihuahuan Desert, this sparsely populated region consists of low-desert grassland mesas bisected by the rocky canyons and bluffs of the Pecos River watershed. Chandler Ranch’s all-inclusive stay includes the use of a mule (a four-wheel drive, gas-powered golf cart) to explore the live-oak forests along the creek—shady wildlife sanctuaries where the temperature feels 10 degrees cooler—and the rugged backcountry. We noted an array of exciting wildlife sightings, including a rattlesnake, a Western coachwhip snake, white-tailed deer, jackrabbits and cottontails, and two hog-nosed skunks. From a distance, the surrounding hills may look like monotone swaths of brown and muted green, but our hikes revealed thick, colorful, and prickly vegetation—ocotillo, sotol, all manner of cactus, acacia, mountain laurel, sideoats grama.

Independence Creek runs with water for only about 8 miles and gets a quarter of its flow from Caroline Springs, just upstream from Chandler Ranch at The Nature Conservancy’s Independence Creek Preserve. To protect Independence Creek, the conservancy has acquired 20,000 acres in the area over the past 25 years. Its efforts started in 1991 with the purchase of a conservation easement from Chandler Ranch stipulating that the ranch wouldn’t develop or subdivide its creek-side property, which covers about two-and-a-half miles up from the Pecos confluence.

Chandler Ranch made the easement deal during a lull in its 60-year history as a guest ranch, Joe said. Joe’s grandparents, Joe and Mildred Chandler, first opened the ranch to the public as a fishing camp during the infamous drought of the 1950s, when raising sheep, goats, and cattle became untenable. Over the years, the Chandlers added amenities—including a popular golf course in 1964, which was later returned to nature as part of the conservation easement—and the Chandlers’ place became a well-known getaway among West Texans. Joe and Mildred eventually got too old to run the guest ranch and it fell into disrepair, including damage from a 2004 flood that destroyed many of the structures.

The younger Joe Chandler, who grew up on the ranch and in nearby Iraan, spearheaded the guest ranch’s recent revival with his wife, Nan. They rebuilt three of the cabins—one sleeps six and two sleep four—with plush but sensible furnishings that reflect the West Texas setting. “I was looking for rustic, natural, and extremely comfortable,” Nan said. “I want the wives to be comfortable and have every amenity they wish they could have when they come out here.” (There are no TVs in the rooms, but Wi-Fi is available at the dining hall.)

Meanwhile, Richard came on board to develop the kitchen. Joe said he interviewed a few chefs who brought plans for fancy cuisine, but he found his man in Richard, a journeyman chef and jack-of-all-trades who landed his first cooking job nearly 40 years ago at Luigi’s, a popular spot in downtown Midland. During our visit, Richard spoiled us with downhome meals like pork ribs, cheeseburgers, crispy tacos stuffed with picadillo, French toast, pancakes, and sumptuous desserts including tres leches cake.

“I finally got my dream job,” Richard said. “My motto is that no one is ever going to leave out of here hungry.”

Word about Chandler Ranch is getting out, both among families that vacationed here in the 1960s and new customers. Joe said the ranch hosted more people in the spring of 2017 than in all of 2016. Plans for the next two years include refurbishing a fourth cabin and building a headquarters house with a new kitchen/restaurant and three hotel rooms.

Joe, who lives and works in Houston, said rebuilding the guest ranch has been a labor of love, a calling to restore pride in the Chandler Ranch and his family’s heritage.

“My generation has a lot to be thankful for that previous generations had that grit and left us something that we as stewards of the land must take care of for future generations,” he said. “It would be a shame to lose the heritage that we have here today.”

Yes it would. The Chandlers occupy a remarkable spot in the rough-and-tumble West Texas landscape, and we’re lucky that it’s open to guests. I was contemplating the extraordinary setting one morning as I hiked along Independence Creek’s gravel bank with my 7-year-old daughter. We spotted bass and minnows in the clear riffles and watched the sunrise illuminate the rugged hillsides. After several minutes of natural silence, trickling water, and birdsong, my daughter spoke up: “What’s that Richard said he’s gonna make tonight, banana pudding cheesecake pie?”

Did I mention the food is good?