A Day at the Beach

Written by Art Williams, Photographs by Larry Ditto | From the May 2015 issue | Updated: April 12, 2015 | Filed Under: savvy travelerTRAVEL 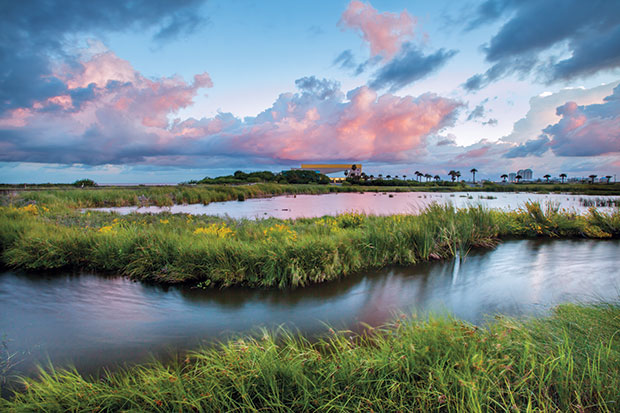 In a family-vacation photo taken in the early 1900s, a family of seven poses at the edge of the surf at South Padre Island.

South Padre Island, on the southern tip of Texas, offers year-round fun. For details about accommodations, restaurants, and attractions on the island, call the South Padre Island Visitors Center, 800/767-2373.

The father wears a suit, tie, and hat; his wife and a friend pose cheerily in long dresses and hats. Only the teenage boy has taken off his shoes in anticipation of wading into the ocean.

Much has changed since those early days on the island, but that wave of pleasure that washes over most of us when we spy the Gulf of Mexico? That never changes. With a wealth of hotel rooms and condos, miles of beach, and plentiful, affordable seafood, South Padre continues to prove itself a good value for a summer trip, and for free or inexpensive entertainment, you need look no further than the island’s history and its native inhabitants.

That portrait, for example, of the formal beach family with the renegade teenager is part of the free South Padre Island History Museum, a small but captivating collection on display at the South Padre Island Convention Centre. Along with coins, glassware, Civil War shell casings, and other memorabilia borrowed from the nearby Port Isabel Historical Museum, photos show well-dressed early visitors—some posing with fish taller than themselves—at the Tarpon Beach Club, a two-story bathhouse, hotel, and casino that opened in 1908. Battered by storms, it disappeared by the 1950s. You’ll also learn about the Great Coyote Hunt of 1931, see 1930s blueprints for the original Queen Isabella Causeway, the model for the bridge that now connects South Padre Island to Port Isabel, and learn about the three hurricanes that hit the island in 1933.

Island historian Steve Hathcock, who has donated many of the coins on display, says, “When I moved here in 1980, I had a job as a waiter. People would ask about the history of the island, and I wanted to know what to tell them. It became a passion.”

If you’re on the island between April and August, you might catch Kemp’s ridley sea turtles nesting, one of nature’s most impressive spectacles.

When you’re through taking in the museum, walk outside the Convention Centre and admire the 1994 Whaling Wall mural, one of 100 exterior whale-themed murals painted across the country by the renowned marine artist known as Wyland. Then take a stroll on a short wetlands walkway out to the Laguna Madre. You’re likely to see roseate spoonbills, egrets, herons, and other birds. But, you might wonder, who are all those people on the longer walkway nearby?

They’re visiting the South Padre Island Birding and Nature Center next door, which, for a minimal fee ($5 for adults), will engross you in nature and birds for hours. Trek on a 3,300-foot boardwalk through native grasses and ponds, climb high above the Laguna Madre to a five-story viewing tower, or settle in for the show behind one of five viewing blinds.

No matter the season, you’re likely to see egrets, pelicans, red-winged blackbirds, spoonbills, and an occasional great blue heron. Spring migration brings warblers, indigo buntings, and orioles, as well. Peer down into the shallow bay and you might see a school of fish or a parade of crabs. If you’re really lucky, you might spot an alligator.

Then walk inside the birding center, where an interpretive center tells the story of the bay’s ecology, bird migration, and dune formation.

From the tower, you’ll spot a small structure just south of the birding center. That’s Sea Turtle Inc., a nonprofit organization that was founded in 1977 to rescue, rehabilitate, and release (if possible) injured sea turtles, as well as educate the public about conservation efforts. Visiting the turtles is free, but a $3 donation ($2 for children) is requested.

Staff members will tell you all about the eight or so resident turtles, which can’t be released into the wild due to their injuries. Allison, a green sea turtle, is one of the stars. She arrived in 2005 with three of her four flippers missing, probably bitten off by a predator. She could swim only in circles and had trouble surfacing to breathe, and she would have died in the ocean. In 2006, a Sea Turtle intern fashioned a prototype for a prosthesis, the first of six that eventually allowed her to swim relatively normally. Allison wears the most recent design, a carbon-steel model that serves as a rudder, a few hours a day. As she and other turtles swim in their tanks, they notice that they have company and raise their heads—maybe not to smile, but at least to acknowledge us.

If you’re on the island between April and August, you might catch Kemp’s ridley sea turtles nesting, one of nature’s most impressive spectacles. When it happens, they swim out of the Gulf onto the beach and furiously dig holes in the sand with their flippers, then deposit their eggs. To keep predators from eating them, volunteers with Sea Turtle Inc. collect the eggs, incubate them, and when they hatch (typically 48 to 62 days later), the little turtles are released back into the ocean. Check for times by calling the hatchling hotline at 956/433-5735.

Also spectacular: summer fireworks over both the beach (Friday and Saturday nights at Clayton’s Beach Bar) and the bay (Friday nights; best viewing between Palm and Red Snapper streets). And, of course, there’s the eternal free sky show that everyone needs to catch: Sit on the beach at sunrise and watch the day’s first rays throw sparkles onto the Gulf.