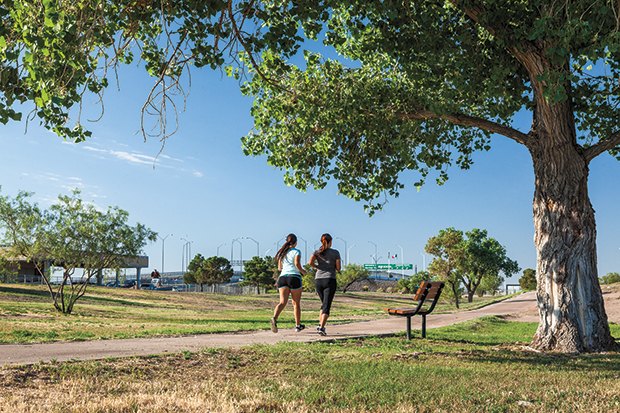 What happens when a river changes course and the border between two countries hangs in the balance?

When standing on the southern edge of El Paso’s Chamizal National Memorial, with a close-up view of the Bridge of the Americas, the answer to this question is tangible. The flow of people and activity crossing the border here is steady—a lively contrast to the Rio Grande below, which is a long puddle of stagnant water in a 167-foot-wide concrete canal.

Chamizal National Memorial, completed in 1974, explains how this unusual stretch of U.S.-Mexico border came about. It’s not your typical national park. There are no big hikes or waterfalls on this 55 acres of land. But with its small exhi-bition space, art gallery, theater, and amphitheater—along with a sprawling grass lawn with walking trails and views of Mexico—Chamizal National Memorial explores how the two countries were able to resolve a fierce 100-yearlong border brawl that arose when the Rio Grande did what rivers are prone to do—change course.

A bright mural near the Chamizal National Memorial Cultural Center greets visitors with vivid renderings of historical figures like Aztec gods, U.S. Presidents John F. Kennedy and Lyndon B. Johnson, and Mexican President Adolfo López Mateos—artistic foreshadowing of the culture and history revealed here. What’s known as the Chamizal Dispute took shape in the decades after the Mexican-American War ended and the United States and Mexico signed the Treaty of Guadalupe Hidalgo in 1848. The treaty identified the center, deepest channel of the Rio Grande as the border between Texas and Mexico.

Provisions had been established for gradual, subtle shifts in the Rio Grande’s course, but no one knew what to do when severe flooding in 1864 pushed the river significantly south. By the turn of the century, about 700 acres of what had been Mexico now lay north of the river in the United States; Mexican farmers had to cross the Rio Grande to farm their own land. Named the Chamizal for the scrubby chamizo bush that grew there, this territory eventually became home to many of El Paso’s poorer families and businesses.

Mexican citizens who lost their land weren’t happy and filed lawsuits. In 1909, Presidents William Howard Taft and Porfirio Díaz met to find a solution, and an independent tribunal with a Canadian jurist took the case. But the American government rejected the tribunal’s 1911 decision that it should return the land to Mexico. The resolution entered a stalemate and stayed that way until Kennedy came along.

In 1962, to cement a friendship with Mexico during the Cold War and deter Soviet and Cuban collusion with Mexico, Kennedy visited President López Mateos in Mexico City.

“Just imagine what a different history we would have if this dispute hadn’t been resolved when it was and Mexico had shifted its alliance amidst the threat of the Cuban missile crisis,” said Anne Doherty-Stephan, the park’s chief of interpretation and education.

Kennedy’s visit led to the Chamizal Convention of 1963, which called for the United States to return 437 acres of the Chamizal back to Mexico. Also, the two countries would share the cost of building the bridge—which would be maintained as a free crossing—and the 4.4-mile concrete canal that would block the Rio Grande from ever causing blurry boundaries again.

Not everyone was happy with this solution, particularly the approximately 5,600 Americans who by then called the Chamizal home. They would have to find a new place to live. Thanks to the University of Texas at El Paso’s Chamizal Oral History Project, there is a treasure chest of personal stories on the UTEP website—interviews with everyone from El Pasoans who helped implement the Chamizal Convention to families who were displaced.

One of the best reasons to visit Chamizal National Memorial is the people who work here, like Saul Sustaita, a Student Conservation Association intern, and custodian Enrique Romero. They both lived in El Paso in the 1960s and remember when the Rio Grande was still a river, not a trickle in a concrete canal. “When we were kids, we would go down to the river and swim all the time; we made a tire swing,” Sustaita said. “But now you can’t walk close to the canal or you’ll get stopped and questioned.”

Standing by the front desk of the cultural center, they show me a laminated copy of the Sept. 25, 1964, El Paso Herald-Post with the front-page photo of Johnson and López Mateos extending their hands for the “handshake of the century” in front of the chrome boundary marker.

When I asked Sustaita and Romero if it was worth it to give the land back to Mexico, they both paused. “Yes, and no,” Sustaita said. “It’s really sad that people lost their homes, but it was good for our relationship with Mexico.”

This is a widely held viewpoint. “Well, there are pros and cons,” said local historian Fred Morales, who lived in the Chamizal and remembers his family’s eviction. “It wasn’t a big deal for me, I was just a little kid. We were renting in the Chamizal. We were one of the lucky families because we found a new place to live very close by.”

But many residents were crushed to leave their homes and community, and the Chamizal National Memorial doesn’t gloss over the losses. Placards on one wall of the exhibition room display photos and quotes from those who were displaced. And thanks to a recent grant, Doherty-Stephan said, the memorial is planning updates to the exhibition that will delve further into the local impact of the resolution, offering oral histories from affected people in El Paso and Juárez.

Park Ranger Rodney Sauter, volunteer coordinator for the park, said Chamizal is an important historical reminder. “Though the settlement may not have been completely harmonious, I think it is important for us to remember a time when our two nations worked together to resolve a disagreement through respect and communication,” he said.

Indeed, this national memorial does that rare and important thing—it makes you open your eyes to something that you may have never questioned, like how a border is made, or just how much El Paso and Juárez are interwoven despite the fences and canals that separate them.

Such considerations are front and center here, as reflected in the history timeline of the El Paso-Juárez border that covers one wall of the exhibition space and in the maps that indicate the border’s many permutations. And you can feel El Paso’s blending of cultures when sitting in the capacious theater (which hosts performances most weekends), watching a children’s dance show honoring the Aztec and Toltec groups of Mexico. The woman who introduced the dancers switched seamlessly from Spanish to English and spoke with pride about our shared ancestry with Mexico.

On another day, a friend and I walked across the bridge into Mexico to see what the Chamizal looks like on the Juárez side. Parque Público Federal el Chamizal, which is a short walk from the bridge, was abuzz with picnicking Mexican families, kids riding horses and go-carts, nappers in hammocks strung in the shade, and carts selling popsicles and aguas frescas.

I was grateful to know, thanks to Chamizal National Memorial, that beneath this hum of activity, there is a story of a diplomatic and peaceful—if not perfect—answer to that question: What do you do when a river changes course?