Written by Art Williams, Photographs by Michael Amador | From the August 2016 issue | Updated: August 1, 2016 | Filed Under: made in texasTRAVEL 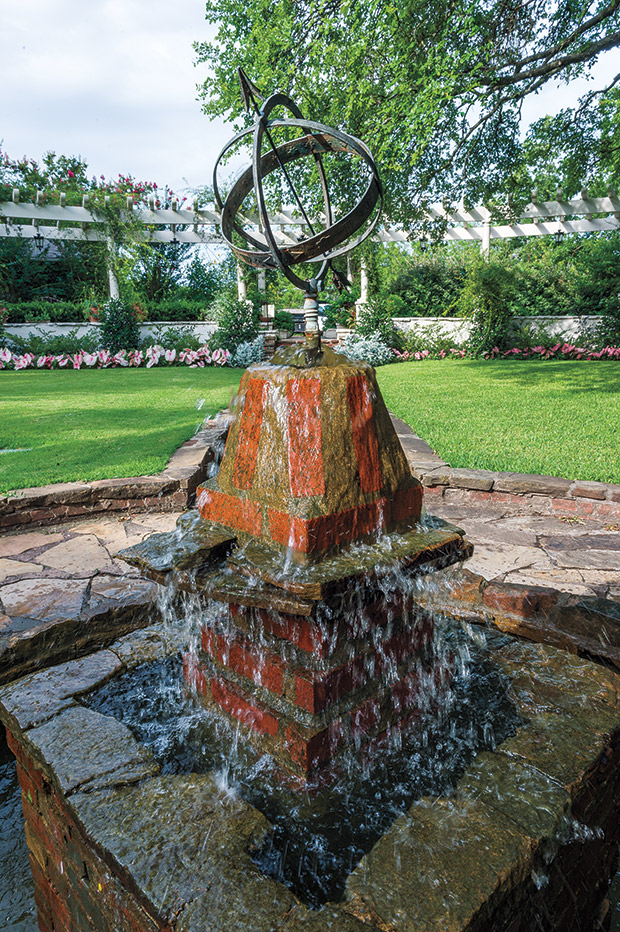 In the 1930s, English painter Douglas Chandor created a magnificent garden at his new home in Weatherford.

Painter Douglas Chandor was as charming as he was creative. I’m standing in the foyer of the prestigious artist’s historic Weatherford home, a 5,600-square-foot dwelling adorned with his sketches, prints, and original works. Staff docent Martha Lott tells me that Chandor, whose paintings of Herbert Hoover, Franklin Roosevelt, and Winston Churchill hang in the Smithsonian National Portrait Gallery, was at a dinner party in New York City in the early 1930s when a striking Texan with red hair and a provocative dress caught his eye.

“He said, ‘You have a lovely back. I’d love to paint it sometime,’” Martha tells me.

The redhead was Ina Kuteman Hill, a Weatherford socialite, and she was immediately enamored with the tall English gentleman. After a short courtship, Douglas asked Ina to marry him, and she agreed with the condition that they reside in her hometown in Texas. After Ina’s mother gave the couple almost four acres of land adjacent to her own in Weatherford, the Chandors built a home on the property, and in 1936 began work on a colorful maze of lush greenery and flowers, intricate water features, brick pathways, and whimsical statues. Originally, the couple named their garden White Shadows.

While the Chandors frequently left Weatherford so that Douglas could paint dignitaries and politicians in New York City and Washington, D.C., the garden was a priority when they were home in Texas. “He said God gave him the ability to paint so he could afford to garden,” Martha tells me. The couple spent nearly two decades here before Douglas’ death in 1953, after which Ina renamed the estate Chandor Gardens.

These days, Chandor Gardens—recently listed in the National Register of Historic Places—opens to the public for self-guided tours and is a popular spot for parties and wedding receptions. With my map in hand, I embark on a journey through the garden’s imaginative spaces—17 in all—crossing tiny footbridges, traipsing stones across a trellis-shaded pond, and admiring fanciful figures, fountains, and hidden nooks along the way.

I exit the courtyard, bordered by an Italianate pergola and shaded by a colossal cedar elm, and hear trickling water from a three-tiered copper fountain in the center of the property. It’s a peaceful spot with sweeping views of Japanese maple trees, blooming Indian hawthorn shrubs, pink peonies, and other brightly colored flowers, all nestled beneath stately elms and live oaks. I hear doves coo and notice a hawk soaring overhead.

As I approach the regal bowling green, I envision the Chandors hosting chic cocktail parties around the grassy pathway, where guests played bocce ball and croquet. Lined with a short stone wall and greenery, the long lane of smooth turf is now popular for wedding ceremonies. I follow a stone pathway toward a rock grotto and notice red bricks inlaid to spell a message to Ina Chandor in Latin: “May this little garden flourish, consecrated to Ina in the year of Our Lord Edward the Eighth, forevermore.” 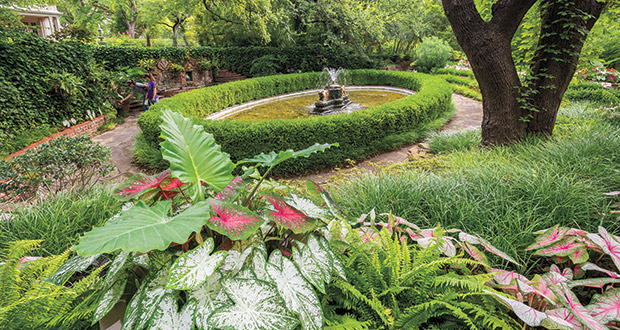 Ahead, two bronze Chi Lin sculptures sit back-to-back in the middle of a larger fountain made from Coke and 7-Up bottles and colored marbles. These mythical Chinese dragons are replicas of the antique ceramic originals that Douglas Chandor bought in New York City, which visitors can now see inside the home. Sunlight peeks through the trees here and reflects off the shimmery water. It’s my favorite spot so far—until I arrive at Mount Cox, a boisterous, 30-foot waterfall on the northeastern edge of the gardens, which honors Ohio Governor James Cox, who funded the falls’ construction after sitting for a portrait. Unfortunately, Douglas Chandor never got to see the waterfall himself; he died before it was completed.

After Ina passed away in 1978, the property sat vacant, Lott tells me. The gardens grew unruly and overgrown, and parts of the acreage became a dumping ground for appliances and other trash. But in the early 1990s, Melody and Chuck Bradford, a ranching couple from nearby Aledo who had visited the gardens as children, bought and restored the property, and re-opened it to the public. In 2001, though, they opted to move on. When developers eyed the gardens, the city of Weatherford stepped in instead, purchasing Chandor Gardens in 2002 and re-opening it to the public as part of the parks and recreation department.

As I carefully step across stones in a koi-filled pond shaded by a wisteria-heavy trellis, I notice a young woman posing for bridal portraits, seated in a circular opening of a nearby stone wall called Moon Gate. I can’t help but think how happy the Chandors would be to see their gardens preserved and bringing such joy to the community.

Perhaps Douglas liked to smoke his pipe in the boxwood garden or stroll with his wife over the curved canal bridge, which features Chinese symbols of luck, peace, prosperity, and happiness. I study my map, which shows a black-and-white photo of the couple: Douglas in a double-breasted suit, holding gloves and a cane with a pipe at his lips, arm-in-arm with Ina, who wears an elegant tea-length dress with a white collar and heels. For a moment, standing in their ma-jestic surroundings, I’m transported to the 1940s.