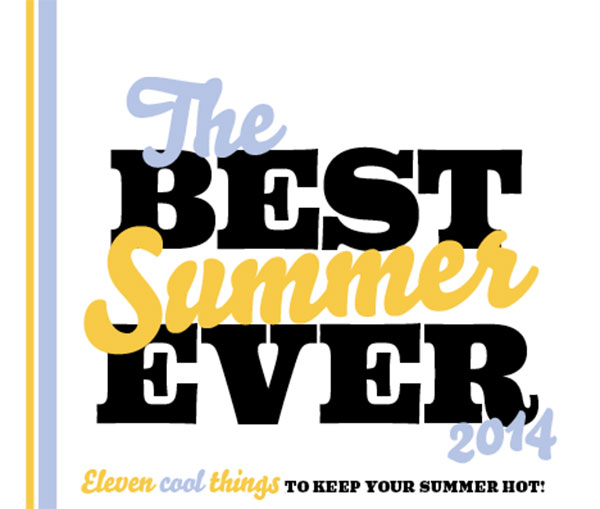 Contrary to popular belief, summer vacation did not originate as a time for rural schoolchildren to take an extended break to help out on the family farm.

No, historians who’ve studied the roots of summer vacation say that 19th-Century education officials were motivated partly by a concern that many of us find relevant today: mental fatigue. Since then, the tradition of an extended summer break from school has remained well entrenched. And we couldn’t be happier about it.

Even for nine-to-fivers, summer brings a sense of levity, the long days extending our perception of the opportunities beyond the walls of the workplace. It’s in this spirit that we set out to explore the myriad possibilities of summer in Texas. From the waters of the Gulf of Mexico to underground caverns, museum exhibition halls, and late-night star parties, we scoured the state to highlight activities that we hope will inspire you to relish your Best Summer Ever.

Get into the Kitchen! 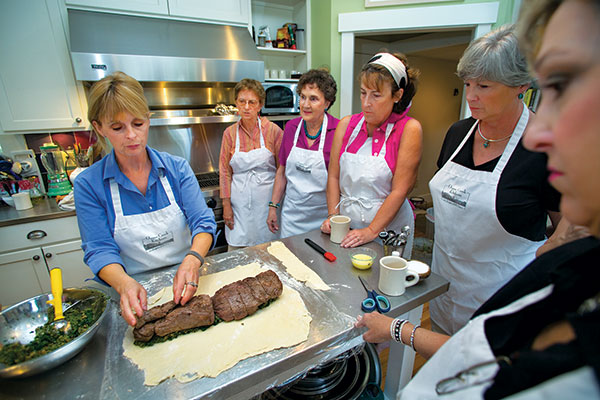 As long as you’re hot, why not learn to cook something delicious? Resorts and bed-and-breakfasts across the state offer on-site cooking classes, adding a tasty twist to a weekend getaway. And you can always stay home, crack open that long-neglected cookbook, and experiment on your own. Either way, “Cook, Eat, Sleep” sounds like a pretty good summer theme to us. Here are a couple of options to get the wheels turning:

On the Greer Farm in the wooded, rolling hills west of Daingerfield, chef Eva Greer teaches “Farm to Fork” classes in a restored 1850 farmhouse. Call 903/645-3232.

In the heart of the Hill Country in Blanco County, Onion Creek Kitchens at Juniper Hills Farm (pictured at left) holds classes in the “Kitchen in the Grove,” a fully equipped, state-of-the-art commercial kitchen and dining space. “Outdoor Grilling” and a “Three Easy Fishes” class are popular in the summer. Call 830/833-0910. 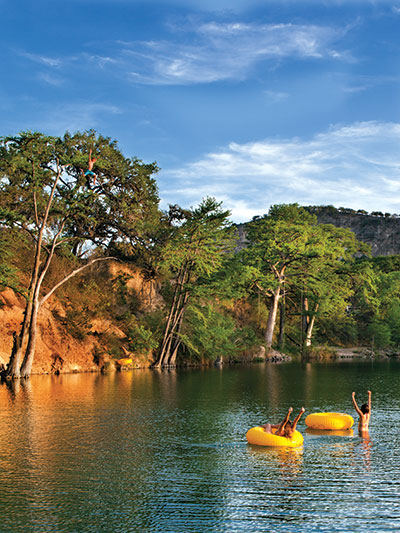 Although few of us think “South Texas” when seeking to escape the summer sun, the Frio River is a notable exception. Even a short plunge in the spring-fed river—which takes its name from the Spanish word for cold—offers a welcome respite. But why not spend the entire day immersed in its water, reclined in a tube, and floating the Frio’s cool currents?True to its name, the Frio’s temperature averages a brisk 70 degrees in summer, the coolness sweetened by bald cypress trees shading its banks. The river lazily flows through the southwestern Hill Country from Real County past Leakey toward Garner State Park and Concan. There are other great tubing rivers in Texas, like the Guadalupe, Medina, and Comal, but the less-frequented Frio is ideal for tubers who want to take it easy.

for information on lodging and outfitters, and daily updates on the Frio’s flow rate, temperature, and depth. 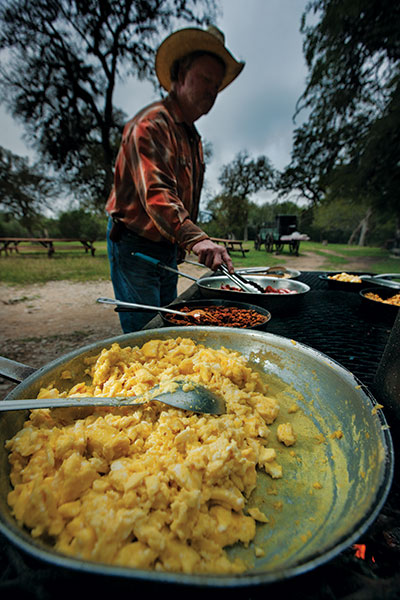 Want to play cowboy this summer?
Texas dude ranches offer the chance to rub elbows with the real deal, and you’ll just feel cooler catching the breeze on the back of a horse. 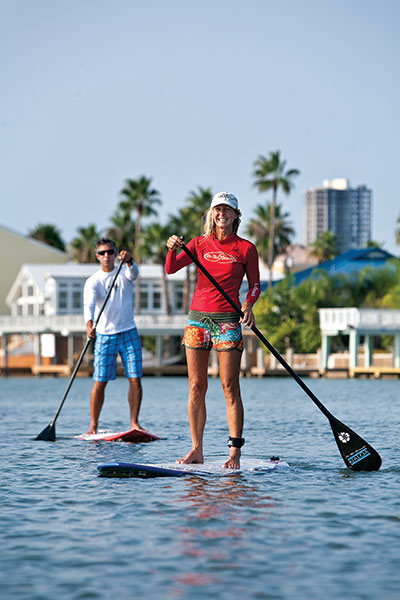 Stand-up paddleboarding combines the best of summer fun in Texas: sun, exercise, and easy access
to swimming. Opportunities abound statewide for trying out the trend of paddling surfboards on lakes, rivers, and the ocean. At Lake Carolyn in Irving, Stand Up Paddle North Texas(Photo © Erich Schlegel)

sells and rents boards for plying the Las Colinas canals—through tunnels and under fountains. Call 972/567-7871.

A few minutes of basic instruction will get you up and going, but a formal class will prepare you for handling wind and other challenges. Once you’ve got it down, maybe you’ll want to try another trend—paddleboard yoga. 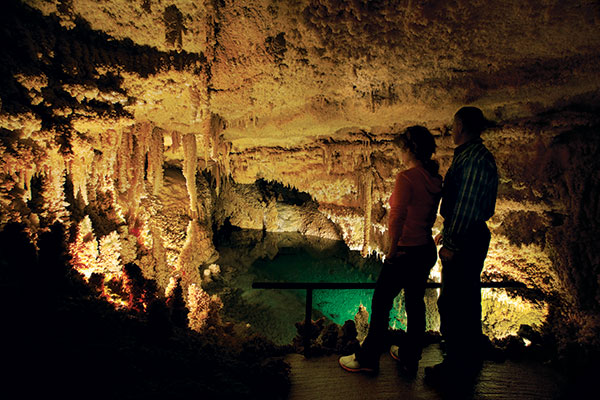 The Caverns of Sonora(Photo © Laurence Parent)

lie in remote West Texas, beneath arid ground dotted with stubby live oaks, prickly pear cactus, and limestone boulders. But you’ll want to make the trip underground to see what speleologists describe as some of the most highly decorated caves on the planet.

The sights include the jumbled rocks and pitted walls of the Devil’s Pit, surreal Halo Lake—with water so clear it looks as if it isn’t even there—and the delicate, helictite-covered walls of Crystal Palace.

Guided walking tours cover about two miles and require about 360 stair steps. The cave’s temperature of 71 degrees feels more like 85, thanks to 98 percent humidity. That’s cooler than outdoors in the summer, but hardly sweater weather. If you’re feeling more adventurous, reserve the four-hour Discovery Challenge tour, which includes a 50-foot rappel into Devil’s Pit. Call 325/387-3105. 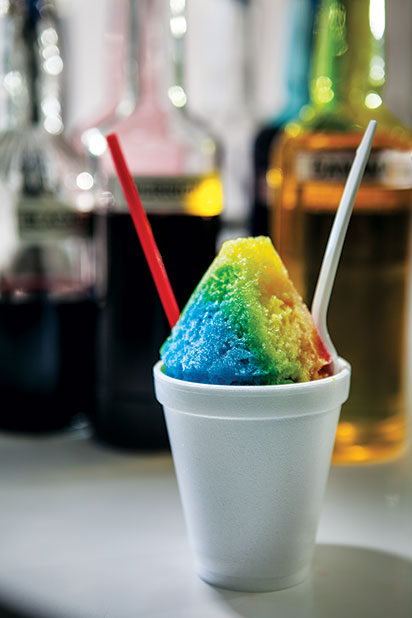 Snow cone, snowball, shaved ice, raspados. It doesn’t matter what variation you prefer of the concoction of ice and sweet syrup. All that matters is that it comes as cold as, well, ice. Most shaved-ice vendors operate seasonally, and some are mobile trucks that set up shop in temporary locations. Ask around your town to find your fix.

Here are a couple of can’t-miss picks:

In Corpus Christi, the Sno-Ball and its sister location, Sno-Ball Too(Photo by J. Griffis Smith)

—located on Baldwin and Airline, respectively—are among the few snow-cone stands open year-round. Their strawberry flavor is award-winning, and the Pickadilly, made with pickles and Kool-Aid, is a perennial favorite. Call 361/993-0025.

Casey’s New Orleans Snowballs (pictured), on East 51st in Austin, uses sugar cane to make more than 60 flavorful syrups. The list includes classics such as root beer, lemon-lime, and coconut, as well as traditional New Orleans chocolate and cream flavors. As owners Pattye, Cliff, and Mars Chapman say, “A snowball can be the highlight of someone’s day.” 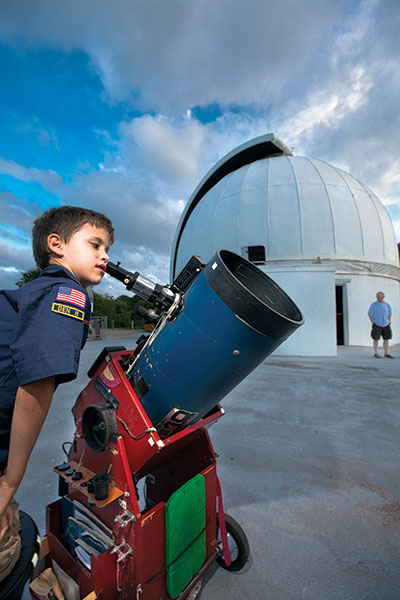 At night, soak up the stars shining in dark skies across the state. In Burnet, Canyon of the Eagles Resort(Photo by J. Griffis Smith)

hosts telescope viewings at the Eagle Eye Observatory, led by members of the Austin Astronomical Society. Lodging and camping on-site make it easy to stargaze to your heart’s content. Check with the front desk for the latest observatory schedule. Call 800/977-0081.

At George Observatory at Brazos Bend State Park in Needville, the Houston Museum of Natural Science operates three domed telescopes, and amateur
astronomers set up a dozen or so more around an outdoor plaza. Public viewings are held every Saturday, starting just after twilight. Indoor celestial-themed exhibits open at 3 p.m. Call 281/242-3055.

You haven’t really star-partied Texas-style, though, until you’ve taken in the skies at The University of Texas McDonald Observatory near Fort Davis, one of the darkest places in the state. Star parties every Tuesday, Friday, and Saturday night include guided viewing of constellations, planets, stars, and galaxies. Call 877/984-7827; www.mcdonaldobservatory.org. 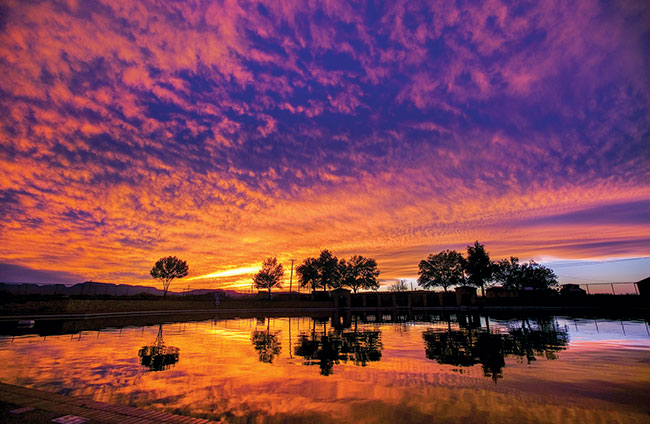 What better way to escape summer’s heat than under water—way underwater? As in scuba-diving.The San Solomon Springs pool at Balmorhea State Park(Photo by J. Griffis Smith)

refills every six hours with clear, spring water, providing visibility up to 80 feet in the 25-foot-deep, nearly two-acre pool. The 75-degree waters will keep you plenty cool as you swim among bubbling springs, catfish, Rio Grande tetra, and endangered Pecos gambusia and Comanche Springs pupfish. Call 432/375-2370.

For an ocean diving experience, check out the Flower Garden Banks National Marine Sanctuary, where protected coral reefs swarm with fish, sharks, rays, and sea turtles. Board charters in Galveston, Surfside, and Freeport to make the voyage 100 miles into the Gulf of Mexico. Call 409/621-5151. 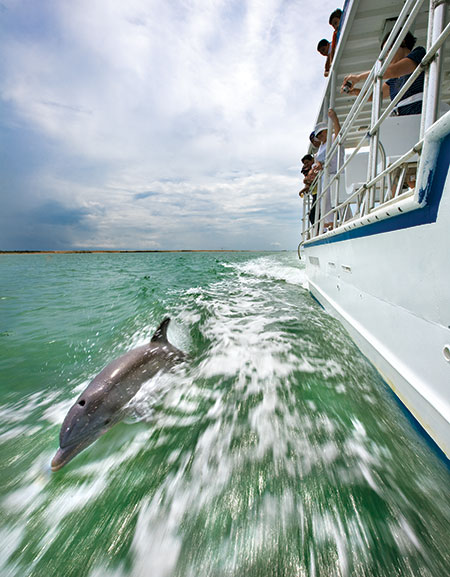 Scarlet Colley of the South Padre Island Dolphin Research & Sealife Nature Center, known as the “dolphinwhisperer,” has been observing area dolphins for more than 15 years, and knows them well. Her tours, aboard the six-seat Skimmer, provide an intimate encounter with the marine mammals.Scarlet’s tours depart from the Sealife Nature Center(Photo © Erich Schlegel)

next to the Port Isabel Lighthouse and focus on the pod of wild bottlenose dolphins in the lower Laguna Madre. Call 956/299-1957.

Dolphins are a frequent sight from the Bolivar Ferry, which carries visitors on a free, 18-minute trip between Galveston Island and Port Bolivar, across one of the busiest waterways in the world. You can drive onto the ferry, but it’s more relaxing to park in the secure lot and walk onto the ferry for a round-trip ride. Call 409/795-2230. 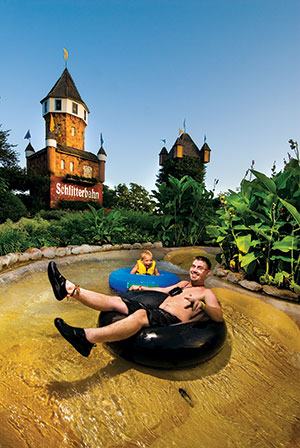 opened in New Braunfels in 1967, the family-owned waterpark has been synonymous with innovation: Second-generation owner Jeff Henry has registered more than 60 patents and trademarks for such inventions as tidal-wave rivers and uphill water coasters, not to mention that squishy flooring that has made waterparks and playgrounds
nationwide more tumble-friendly.

Schlitterbahn operates waterparks in New Braunfels, South Padre Island, and Galveston (plus Kansas City), and will open its newest this summer in Corpus Christi. That growth hasn’t cost Schlitterbahn its family appeal; guests can bring in ice chests and picnic baskets, some rides and areas are made for little tykes, and parking is free. Rides and amenities vary from park to park—South Padre and Galveston offer heated areas for all-season access, and New Braunfels and South Padre have on-site lodging—but all parks provide oceans of cool summertime fun for water-lovers of all ages. Call 830/625-2351. 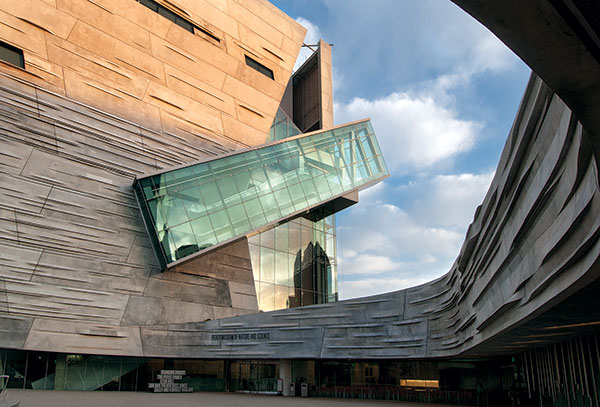 Amaze your brain and engage your hands at the Perot Museum of Nature and Science in Dallas. Designed to bring science to life, the museum’s five floors feature exhibits ranging from geology to biology, energy, sports, and birds. There are also six learning labs, a children’s museum, and a multimedia 3D theater. To reduce overcrowding, exhibit hall tickets bear specific admission times; the average visit takes three to four hours.

This summer’s highlights include The World’s Largest Dinosaurs, featuring enormous sauropods and life-size displays of their bodies and internal organs. Another is the Build-It Garage, or B.I.G., with hands-on activities like building paper rockets and launching them by stomping on a giant air hose.

Insiders suggest starting on the top floor and working your way down. A café on the Main Level means you won’t have to cut your visit short for a snack, and the museum’s location adjacent to downtown Dallas lets you take advantage of plenty of other attractions within walking distance. Call 214/428-5555.