Written by: Celestina Blok
Photos by: Will van Overbeek

Written by Art Williams, Photographs by Will van Overbeek | From the March 2015 issue | Updated: February 16, 2015 | Filed Under: detourTRAVEL 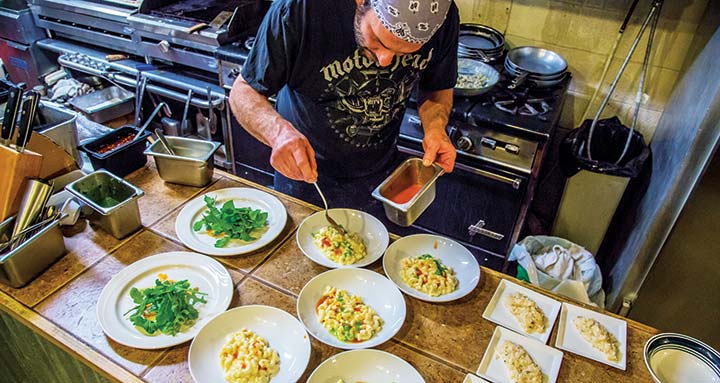 Twelve years ago, my suburbanite parents got a wild hair and bought five acres of rugged terrain in Bluff Dale, a stoplight-free, unincorporated community 58 miles southwest of Fort Worth. Back then, a filling station and a deer processor were the extent of area attractions. Today there’s still no stoplight, which means unassuming travelers cruising US 377 between Stephenville and Granbury may miss one of the state’s most delicious destinations—one that usually inspires first-time visitors to wonder, “Why haven’t I been here before?”

Bluff Dale is part of the popular Chalk Mountain area scenic wildflower loop. The route follows US 377 from Dublin to Granbury; turns south on Texas 144 to Glen Rose; west on US 67 then Texas 220 to Hico; and then northwest on Texas 6 to Dublin.

The transformation of Bluff Dale into a worthy daytrip started with the opening of Bluff Dale Vineyards in 2004. That’s where I’m sitting now with friends, in a wrought-iron chair on a tree-shaded patio deck overlooking rows of grapevines and what could be mistaken for a Hill Country view. The hills on the horizon shelter beautiful pastures of spring wildflowers (Bluff Dale is part of the Chalk Mountain area scenic wildflower loop), as well as outdoor recreational pursuits at Dinosaur Valley State Park and Fossil Rim Wildlife Center near Glen Rose.

Our Bluff Dale excursions always start at the vineyards, where we’re enthusiastically greeted by hospitable owners David and Theresa Hayes, who harvest and crush grapes with the help of their sommelier son, Chris. Visits usually begin at the wine bar with a tasting of their core varietals, including Paragon, an award-winning, spicy cabernet-merlot blend, and White Cliff, a crisp muscat blend with green apple notes that quenches in the summer. But today we forgo the tasting and choose a bottle of smoky cabernet sauvignon.

We watch the outdoor tables fill with folks who unpack wine-friendly bites, like grapes and cheese cubes, while others order Theresa’s steamed edamame or smoked salmon with capers and a medley of crackers. Under the winery’s large covered-seating area, a recent addition built for overflow seating and private events, a jazz band plays and several guests tap their toes to the beat. It’s fun to watch visitors embark on the Bluff Dale day-trip drill: Start at the winery with a sip and a snack (and maybe a twirl or two on the dance floor) before snagging a bottle to-go for a BYOB dinner back on the main drag.

A recent addition to Bluff Dale’s small but impressive dining scene is Wilfong’s Cajun Shack and Oyster Bar, opened in 2013 by Stephanie Wilfong, who also owns Kenny Fred’s Bluff Dale Deer Processing. She wanted to “give the girls something to do in the off-season,” she tells me, referring to her female staff of butchers. Awning-covered picnic tables are the only seating option at this outdoor joint, and when we stroll by to take a look, every one of them is full. Patrons come for flaky crawfish pie, hot filé gumbo, palm-sized oysters on the half shell, and homemade boudin. We’ll be sure to return for a proper meal before Stephanie temporarily closes the restaurant in early October to prepare for deer season (the restaurant typically reopens in early April). But tonight we have reservations across the street at Let’s Eat.

Let’s Eat is owned and operated by Curren Dodds, a do-rag-clad, classical-ly trained chef from Dallas with cool sideburns and a permanent five o’clock shadow. He opened his matchbox-size restaurant in an early 20th-Century post office a decade ago. Around 40 diners pack in during each of the two seating times—6 or 8:15 p.m.—on Thursday, Friday, and Saturday nights.

The open kitchen of Let’s Eat, located within arm’s length of the crowded communal seating area, is easily accessible to guests, who can step right up to watch Dodds sear their sea scallops or flame-grill their pork chop. The scene is much more entertaining than any staged reality TV cook-off. While two servers take orders, Dodds works as the lone soldier on the line, keeping one eye on his food prep and the other on the crowd. (Catch his glance and you’ll likely be met with a mischievous wink.) Dodds and his crew plate dinner and serve the entire room at once, as if guests are all members of one party. And we might as well be, as conversation flows between diners in close proximity.

I order the macaroni and cheese topped with grilled shrimp. A creamy sauce of eight tangy cheeses coats the elbow pasta, which is accented with oils of smoked jalapeño, scallion, and sesame. The warm shrimp are toothsome and liberally dusted with sweet and smoky seasoning. It’s the most decadent and savory macaroni and cheese I’ve ever experienced. Two of my friends order the grilled rib-eye steak with asparagus and mashed potatoes. The steaks, with their crusty grill marks and perfectly cooked interiors, pink and juicy throughout, are unanimously the best we’ve ever tasted.

After finding room for a dessert of lightly fried, miniature peanut butter-and-jelly sandwiches, paired with cinnamon ice cream, we notice Dodds with his arms deep in the dish sink. His culinary talents could take him to any sleek metropolitan venue, but here he is washing pots and pans while his staff rings customers up. It’s like we’re in his home, I tell him. He reminds me that we practically are, referring to his proud devotion to the restaurant and allegiance to Bluff Dale, a community of unexpected delights.