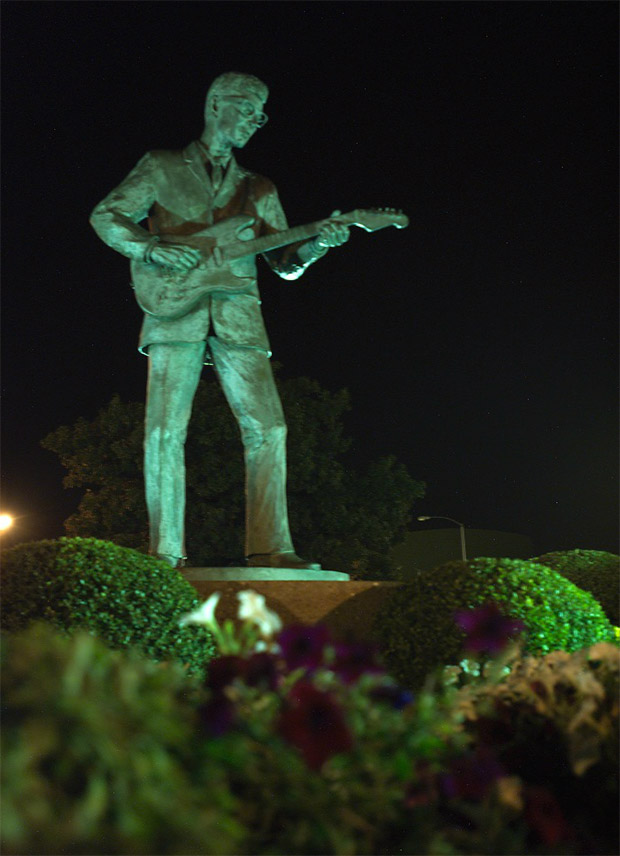 Fifty-seven years have passed since that snowy night in Iowa on February 3, 1959, when a plane crash took the life of Lubbock-born musician Buddy Holly. He was 22 years old. Also killed in the crash were California musician Ritchie Valens, who was enjoying newfound fame from his hit La Bamba; J.P. “The Big Bopper” Richardson, a disc jockey from Beaumont whose recording of Chantilly Lace launched his singing career; and pilot Roger Peterson. The three musicians, part of an all-star lineup touring the upper Midwest in a show dubbed The Winter Dance Party, perished immediately when their four-passenger Beechcraft Bonanza plunged into a cornfield shortly after takeoff. In a tragic twist of fate, Holly’s bass player on the tour, fellow Texan and future “outlaw country” star Waylon Jennings, had given his seat to Richardson at the last minute, opting instead to take the bus
to the tour’s next stop in Fargo, North Dakota.

Born Charles Hardin Holley in Lubbock on September 7, 1936, “Buddy” Holly started performing as a teenager, playing mostly  country and bluegrass songs for local dances. Holly made his first recording (of Hank Snow’s song My Two-Timin’ Woman) in 1949, but his musical career gained momentum in 1953, when he began to appear regularly with musician Jack Neal on local radio station KDA V’s live Sunday-afternoon broadcast The Sunday Party. By 1955, when Holly and his band opened for Elvis Presley at Lubbock’s Fair Park Auditorium, he had begun to make the switch from country to rock-and-roll. Soon, Holly was perfecting a blend of a jangly guitar sound and distinctive vocals that would define hits like Peggy Sue, Oh, Boy!, Maybe Baby, and That’ll Be the Day.

Other Buddy Holly sites in Lubbock include his gravesite, near the 31st Street entrance of the City of Lubbock Cemetery (806-767-2270; cemetery.ci.lubbock.tx.us) and the larger-than-life Buddy Holly statue, at 8th St. and Ave. Q.

Contact the Lubbock Convention and Visitors Bureau (800-692-4035; www.visitlubbock.org) for information about the self-guided Buddy Holly Historical Tour, a driving tour of such sites as the singer’s high school and childhood homes.

In the recent book The History of Texas Music (Texas A&M Press), author Gary Hartman, Director of the Center for Texas Music History in San Marcos, calls Holly “undoubtedly the most famous and influential early rock-and-roll musician to come from the Lone Star State.”

As Hartman notes, Holly’s influence on popular music was widespread and lasting, with artists including Bob Dylan, the Byrds, Bruce Springsteen, Linda Ronstadt, and the Rolling Stones acknowledging Holly’s impact. Perhaps most famously, members of the fledgling Liverpool band The Quarrymen were so taken with the 1957 song That’ll Be the Day, the Number One single Holly recorded with his band The Crickets, that they recorded the song themselves as their debut track. In 1960, the Quarrymen rechristened themselves the Beatles, reportedly in tribute to the Crickets. Bassist Paul McCartney considered Holly’s music so influential, writes Hartman, that he “purchased the entire Buddy Holly song catalog when it became available in the 1970s.” Rave on, Buddy.