The sticky business of keeping honeybees 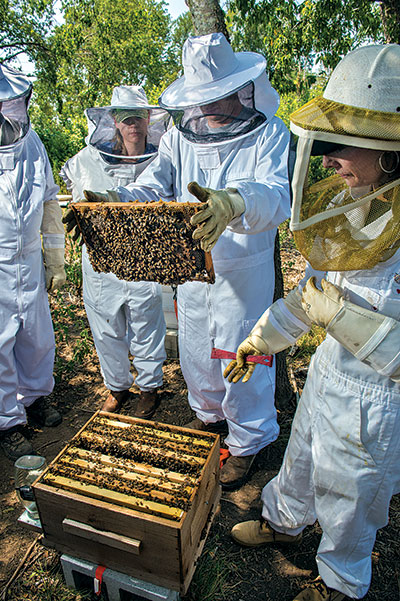 On a steamy Saturday morning, I park my car alongside a rural road in Denton County. At a roadside check-in table, I’m handed a white zippered jumpsuit, elbow-length gloves, and a netted hat; not the smallest patch of skin will be left exposed.

I suit up and begin the walk across the field toward a group of a half-dozen strangers, looking otherworldly in their head-to-toe white attire. Notebooks in hand, we’ll hang on to every word of our instructor, who’s teaching a Dallas-area class of Round Rock Honey’s single-session Beekeeping School.

Our group includes a man whose wife dreams of honey made from the nectar of the flowers on their farm; an educator exploring whether a hive would make a good teaching addition to a school garden; a curious type who snagged a discounted class through Groupon; and Alvin and Paula Ashley of Allen, who have bought some rural property with an eye toward raising chickens, goats, and honeybees.

There’s much to discuss before visiting the hives, and the gloves come off as the session begins with two hours of “classroom” instruction. As we delve deeper into the life of the hive, it becomes clear that the facts about the bees (if not the birds) are weirder than one might imagine.

Honeybees are a fiercely focused lot. Their mission is to produce honey and to reproduce, cycling the life of the hive ever forward. While a single worker bee typically lives only about six months, a hive can—theoretically, anyway—live forever. Reproduction is up to the queen, a specialized worker bee; she mates with a dozen or more drones in a single episode, leaving her sufficiently fertilized to reproduce for the rest of her life. Afterward, having served their only purpose, the male bees perish.

The all-female army of worker bees makes up 95 percent of the hive’s population, and they are in charge: They take care of the larvae, make the honey, clean the honeycomb, and even decide who gets to be queen. Bee life is unsentimental and incredibly successful; the cycle has been going on for millions of years.

We learn that Texas is well-suited to low-maintenance beekeeping, thanks to relatively mild winters and enough rural flora to provide plenty of nectar. We secure our netted hats and gloves and leave our notebooks behind to head over to the buzzing hives. Our instructor removes the top from what looks like a stack of simple wooden boxes, lifts out a vertically hanging frame, and turns it on its side to reveal bees crawling all over the honeycomb, many cells covered in beeswax. He takes his knife and gently scrapes away some of the wax, and an immediate ooze of amber-hued honey begins. On the other end of the frame, under rounded beeswax caps, are larvae. The class watches closely as a new bee emerges; we issue a collective “awww.”

Round Rock Honey teaches biodynamic beekeeping, an organic method that owner Konrad Bouffard says fosters hives that are less susceptible to the colony-collapse disorder that has affected some larger commercial operations. Biodynamic beekeepers use handheld smokers to calm their bees when working with the hive, cinnamon to discourage ants, and olive oil traps to kill beetles. On occasion, they’ll even coat their bees with powdered sugar, which prompts them to clean each other, helping to prevent mite infestation.

We learn that bees have the amazing ability to communicate exact locations of flora up to four miles away using their “waggle” dance, a figure-eight pattern punctuated by shimmying. To make honey, the bees work in concert collecting nectar, regurgitating it into the hive’s cells, and dislocating their wings to fan it, reducing its water content. A single worker bee will produce about 1/8 teaspoon of honey in its lifetime—a mere drip. But it adds up: A hive can house up to 50,000 bees, and yields anywhere from 30 to 185 pounds of honey a year.

Round Rock Honey, founded in 2003, has hives situated in 90 locations around the state, which makes for a deep-amber honey that brings together an array of local flavors and pollens. Round Rock Honey taps somewhere between 50 to 100 of its hives each week, but only “robs” a frame or two at a time, allowing the honey-making to continue at a faster clip.

For Alvin and Paula Ashley, two of the 10,000 or so Texans who’ve attended the one-day school since its launch in 2008, the class has confirmed their intent to keep two to three beehives to pollinate the garden they have planned for their land. “We still have much to learn about these amazing little lives that benefit all of us,” says Paula.

Bouffard sees backyard beekeeping as far more than a hobby for honey-lovers; in the course of collecting nectar, bees are doing the important work of pollinating the fruits, vegetables, and nuts we eat. “Without greater awareness among consumers, the plight of bees can’t improve,” Bouffard says. “The backyard is the perfect place for this change to begin.”