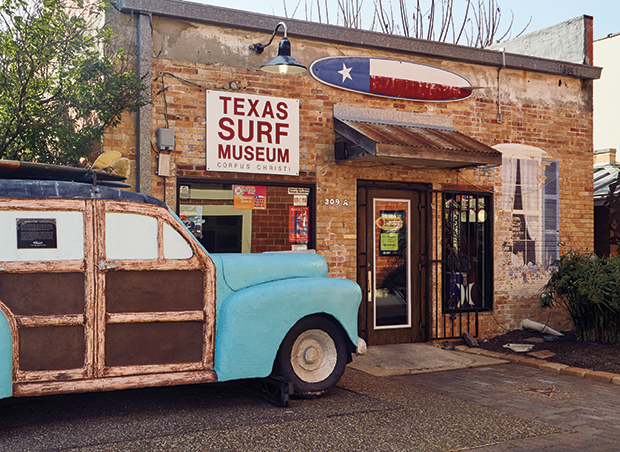 Corpus Christi’s Texas Surf Museum celebrates the culture and history of surfing in the state. (Photo by Nathan Lindstrom)

If you’d like to meet a friendly Texas surfer, park a two-wheel drive vehicle along the shore of Packery Channel between North Padre and Mustang islands. You’ll probably get stuck, but that’ll give you the opportunity to meet an outgoing surfer like Smokey, a fedora-wearing Corpus Christi native who’ll tow you to firmer ground using his truck and a frayed rope.

Don’t worry, he’s not in a hurry to hit the waves—the ocean here boasts about as many swells as a kiddie pool. But what Texas surfers lack in killer waves, they make up for in community and a reverence for their shared history, cataloged at Corpus Christi’s Texas Surf Museum.

Opened in 2005 to showcase memorabilia collected by area surfers, the Texas Surf Museum feels like it was curated by someone wearing sandy flip-flops—and in fact that’s the preferred footwear of museum founder Brad Lomax, who explains, “Basically, we have a bunch of cool, old stuff that encompasses Texas surfing.” The exhibits focus heavily on history, but they’re presented less like lessons and more like stories you’d hear by sharing a pint with a weathered surfer. Perhaps not coincidentally, the museum is located adjacent to Executive Surf Club, a watering hole popular with both surfers and Corpus Christi residents simply looking to unwind.

At roughly 1,500 square feet, the museum makes up for its small size with the density of its collection. Vintage surfboards deck the walls from floor to ceiling, with examples of nearly every type of board ever to enter the water, including priceless vintage longboards crafted by California surf legend Greg Noll. Framed surf-film posters look like they came straight out of a teenager’s bedroom in the 1960s, ranging from faded promos for campy flicks like La Fiesta de los Bikinis to a signed print from the iconic 1966 surf documentary Endless Summer.

Locals donated much of the museum’s collection, including the original signage from Port Aransas institution Pat Mcgee’s Surf Shop, which features a brightly painted parrot perched on a wave. Newspaper clippings chart the history of the surfing scene on the Texas coast, with a large area devoted to the epic waves created by Hurricane Katrina in 2005. A kitschy, 3-D beach diorama sits in a window, given to the museum by a surfer who died shortly after he donated it to the museum. It’s the type of personal memorial you’ll learn about on an informal tour by Lomax, who happily shows visitors around.

The wall of vintage, beach-scene photos proves that Texas had its fair share of long-haired surfing hippies, but the museum isn’t content to rest its laurels on nostalgia. Lomax regularly updates the collection, be it with temporary exhibits like a series of avant-garde surf cinema in coordination with art nonprofit Ballroom Marfa, or permanent assets like an interactive station where visitors can monitor the location of tagged sharks.

Plenty of adults visit the museum, including a surprising amount of foreign tourists, but Lomax hopes the new exhibits also inspire a new generation of surfing enthusiasts.

“We’re starting to focus on the education component of our mission statement, which is to encourage, enlighten, and educate people on Texas surfing,” Lomax says.

A crucial part of that education is instilling the next generation with a sense of stewardship. An eye-catching exhibit of hundreds of drinking straws, the most common form of debris found on Texas beaches, reminds visitors of human impact on the oceans. That sense of responsibility is also stressed at Texas Surf Camps, which has three locations in nearby Port Aransas and Galveston. Unaffiliated with the museum, these programs teach the basics to children and adults of all ages with hopes that they’ll also develop a reverence for the natural environment.

“Every time I surf here, it’s different,” says 18-year-old surfer Christian Villegas, who learned the sport at age 11 and now works as a Texas Surf Camps instructor. “You’re always learning new things. Not even professionals can perfect it—you’re surfing with Mother Nature. That’s what makes it so fun; every day is different.”

Young surfers like Villegas are likely to be found hanging out at Corpus Christi’s Dockside Surf Shop. It’s a scrappy, informal clubhouse where surf videos play on an old CRT TV as a peanut gallery of regulars leisurely while away their afternoons.

Owner Tippy Kelly has been a fixture of the surfing scene since the ’60s (you can see a photo of her wearing a vintage swimsuit at the museum), and she still surfs most mornings before coming to work.

“There’s just no way we’re going to quit,” Kelly says. “I’ll go three days without going out there, but I can’t stand it. I’ve gotta go back out surfing. It’s a total addiction.”

Unlike in California where steady ocean currents guarantee big waves year-round, Texas surfers rely on weather forecasts. The direction and strength of wind determines which beaches have waves, so surfers study tropical storms on sites like SwellInfo.com with morose anticipation. The museum recently added a wave simulation installation that shows the science behind ocean hydro-dynamics, helping further educate local surfers who joke that they’ve basically earned minors in meteorology.

Still, no amount of weather-watching or museum exhibits can turn ankle busters into epic swells. A common refrain among Texas surfers is if you can figure out how to surf here, you can surf anywhere.

“You have to be an optimist with low standards to be a Texas surfer,” Lomax says. “There are guys in California who wouldn’t even paddle out for some of the stuff we’re excited about.”