The National Butterfly Center in Mission 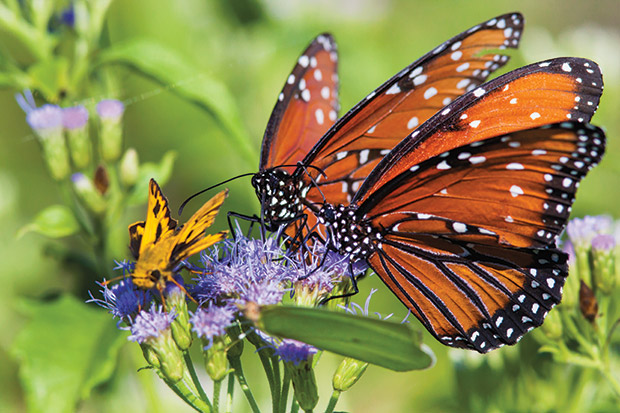 Beginning October 31 and continuing through November 3, butterfly enthusiasts from around the world will descend upon the Lower Rio Grande Valley to participate in the 20th annual Texas Butterfly Festival. Hosted by the National Butterfly Center in Mission, the festival kicks off with a free, family-friendly Community Day at the Center, followed by three days of field trips and educational sessions for butterfly enthusiasts.

Expert guides lead small groups to private properties and little-known butterflying hot spots, in addition to the Rio Grande Valley’s renowned public lands. “These ‘secret gardens’ and hole-in-the-fence destinations are normally off-limits to individuals, so they may only be seen as part of the Texas Butterfly Festival,” says Marianna Trevino-Wright, executive director of the National Butterfly Center. In 2014, participants recorded 115 species of butterflies.

So I recently packed my camera and binoculars and headed for the National Butterfly Center in Mission. This 100-acre butterfly paradise lies in the Lower Rio Grande Valley, where 325 types of butterflies—an astonishing 72 percent of all butterfly species seen in Texas and more than half of those known in the United States—have been documented. At the National Butterfly Center, more than 100 species of native plants in 30 acres of gardens attract butterflies, birds, and even a bobcat or two.

Jeffrey Glassberg, founder of the North American Butterfly Association, first began to dream of a national butterfly center during a visit to the Valley in the mid-1990s, when he was astounded by the number and diversity of the butterflies he saw. The project began to take shape in 2002, when local developer Mike Rhodes gave the association 82 acres of land near Mission, most of which had been previously used for growing onions. Additional donations of land and money followed, helping to secure more land and build a visitor’s center, greenhouses, walking trails, and education facilities. Over the next several years, staff and volunteers converted the old onion fields into an oasis of native plants. The center officially opened in 2004.

Upon my arrival, I walked from the parking lot to the Visitors Pavilion, watching and photographing clouds of butterflies as they sipped nectar from clumps of flowering shrubs known as blue mistflower. Inside the pavilion, I took in the interpretive exhibits and considered various guidebooks and butterfly trinkets at the gift shop until I spotted a whiteboard marked with “recent sightings.” The possibility of seeing a Two-barred Flasher or a Julia Heliconian lured me back outside and to the purpose of my trip: seeing butterflies.

In the Welcome Garden, the brilliant red, orange, and yellow flowers of a Mexican Flame Vine attracted Queens, darting skippers, longtails, and Gulf Fritillaries—common but still exhilarating sightings in this part of Texas. In hopes of spotting some rarer species, I continued to Hackberry Alley, where dozens of orange, cream, and brown Tawny Emperors soared along the tree-lined path, landing occasionally to spread their wings and bask in the sun.

In dappled shade, orange slices dangling at eye level were crowded with butterflies. Nearby, logs smeared with a mixture of overripe bananas, stale beer, and brown sugar enticed still more. As I ambled along, Emperors took flight from the bait logs, a Zebra Heliconian glided by, and birds rustled in the trees and brush, softly calling to each other. Heaven!

A shout went up from a group of serious butterfly-watchers nearby: “Quick! There are six or seven Pixies over here!” The crowd rushed to a blue mistflower. I eagerly joined in, my camera poised. Looking like a kindergartner’s bright finger painting, the Red-bordered Pixies shined glossy black, their wing tips dipped in brilliant yellow. Vibrant red spots lined their wing borders. The Lower Rio Grande Valley is the only place in the United States where you can see these gorgeous little butterflies.

As I photographed the Pixies, Grounds Manager Max Muñoz joined me. “That blue mistflower—or crucita as it’s known in South Texas—is a great butterfly plant,” he told me, explaining that it’s a significant nectar source and that 69 species have been spotted on a single crucita here. “We plant trees near nectar plants so that the butterflies have a place to roost at night or to shelter during a rainstorm,” he continued. Pointing to one of the flower beds—a thicket of tangled shrubs, trees, and twisting vines—he emphasized that each plant has a purpose: “Some people think our native plants are messy or ugly, so we’re using them in formal gardens to show people how beautiful they are and what can be done at home.” Plans eventually call for more than 40 gardens, each featuring nectar plants for butterflies and host plants for caterpillars. “If you’re looking for Monarchs,” Muñoz said, “you’ll be able to head to a garden planted with the 14 types of milkweed plants that attract them.”

I can hardly imagine the butterfly bounty being any richer. After Muñoz wandered off to meet a Boy Scout troop—one of hundreds of youth groups that visit the center each year—I returned to my search, mesmerized when a tiny, green butterfly with a silvery-white stripe flitted between lantana flowers. A Silver-banded Hairstreak! A larger, bluish-white and orange butterfly floated by on the breeze. My first White Peacock! I sighed happily and scanned the shrubbery for my next find.