Wild is the Wind on the Texas coast 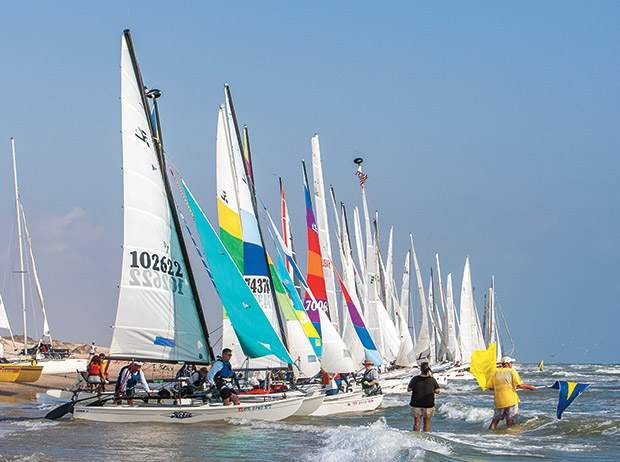 A pod of eight dolphins broke the surface of the water as we turned our sailboat back toward the Corpus Christi skyline. My friend and sailing mentor Guy Le Roux stood at the helm of his 20-foot sailboat in the steady southeastern breeze. The dolphins surfaced behind us, then appeared next to the bow. One after the other, they dove and leaped from the water alongside our boat. Guy slowed our speed to match the pod’s, and for the next few minutes we played an aquatic game of leapfrog. Encounters with dolphins are so common that every major tourist destination on the Texas coast has dolphin-watch tours, but there is something magical about encountering these creatures from your own boat.

Here are some contacts to get you started on your Texas sailing adventure:

The Texas coastline is 367 miles long, following a gentle arc from Sabine Pass south to the Rio Grande. More than half of this coastline is protected by low-lying barrier islands, including 113-mile-long Padre Island. These islands harbor bays and lagoons that are protected from the Gulf of Mexico, resulting in large areas for safe sailing. And there is never a lack of wind on the Texas coast: Wind speeds average between 15-20 miles per hour across South Texas, and it’s only a bit less windy in the Houston/Galveston area. The wind comes from the southeast off the Gulf of Mexico and blows more than 300 days a year; in general, the wind picks up around 10 a.m. and will blow strong and steady until after midnight.

There are three ways one can enjoy coastal sailing. One is to view a race from shore, as many cities and towns along the coast have sailboat races that offer great spectator viewing. The second is to charter a cruise; charter options range from wildlife-viewing excursions to snorkeling trips, fishing outings, and even sunset dinner cruises. The third is to launch your own sailboat (or rent one if you’re certified to do so).

The Houston/Galveston area has its sailing hub in Kemah and neighboring Clear Lake. According to Troy Wise of Clear Lake’s Lakewood Yacht Club, this region is home to one of the largest sailing fleets in the United States. “Thanks to Houston’s size, we enjoy a tremendous depth of service and experience here,” he says. Clear Lake is connected to Galveston Bay via channels, with numerous marinas in between. This makes these bodies of water ideal classrooms for aspiring sailors, and several sailing schools approved by the American Sailing Association are based here. Under the supervision of qualified instructors, students learn the basics of sailing on the protected waters of Clear Lake, then graduate to sailing on Galveston Bay and the Gulf of Mexico. Certified graduates are then licensed to rent their own chartered “bareboat” sailboats (without a hired captain) in Texas and anywhere in the world. 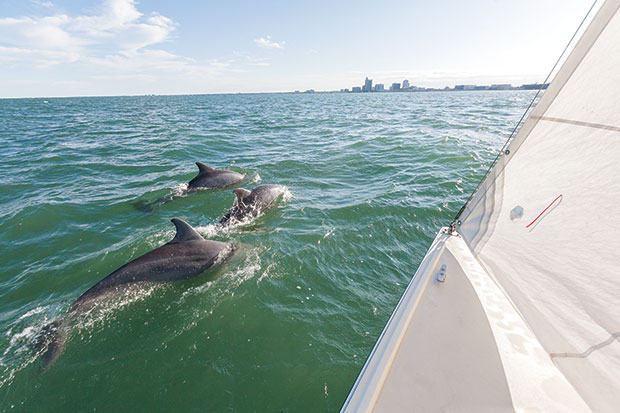 During Daylight Savings Time, Clear Lake holds Wednesday night sailboat races offshore from the Villa Capri restaurant. After a visit to nearby Space Center Houston or before an evening at the Kemah Boardwalk, visitors can witness sailing races up-close. Some of the turning buoys are placed so close to the docks that spectators can appreciate the teamwork required to trim a jib going against the wind, or to hoist the spinnaker— the boat’s large, colorful sail. Race officials on the dock often provide running commentary to enhance the understanding of the race.

Corpus Christi has a smaller sailing fleet than the Houston region, but it’s very much a “sailing city” with its dependable winds and a downtown marina berthing hundreds of sailboats. Corpus Christi hosts a number of national and world sailing championships, and every Wednesday evening, year round (weather permitting), local sailors compete in races that start within feet of the Lawrence Street T-Head. The city provides bleachers for spectators to watch the yachts jockeying before the start of the race, and the downtown harbor and the bay’s bluff-lined city parks create a natural amphitheater for watching the regattas. After the boats sail off toward the mid-bay turning marks, you can watch the big finish from the deck of Joe’s Crab Shack.

Nearby Rockport, Aransas Pass, and Port Aransas are popular sailing destinations from Corpus Christi. Captain Tom Doran of Handsome Sailor Yacht Charters provides a wide selection of sailing charters on his extremely stable catamaran, the S/V Isla, out of Aransas Pass. Captain Tom provides everything from sightseeing and wildlife-viewing cruises to offshore fishing cruises and excursions to St. Jo Island, a popular spot to look for seashells.

At the southernmost tip of the state, South Padre Island and Port Isabel offer some of the clearest waters along the Gulf Coast. Launch your own boat, or join a cruise with Southern Wave Charters, which offers sunset dinner cruises and bay snorkeling trips departing from a dock near Louie’s Backyard. 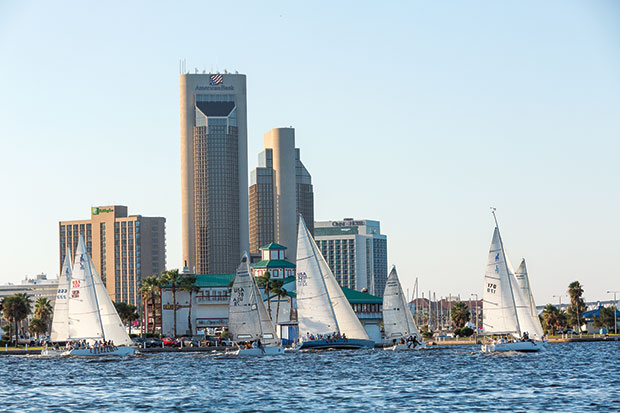 Interestingly, with the right wind conditions, you can sail along the entire length of the Texas coast and never enter the Gulf of Mexico. The Intracoastal Waterway, or ICW, is a protected shipping lane that runs along the entire eastern seaboard of the United States from New York to Brownsville. Channels cut through areas where the natural bays end, allowing boat traffic to safely cross north and south along the Texas coast.

In fact, two regattas use the ICW going north from South Padre Island and Port Isabel. Every Labor Day weekend, the Ruff Rider Regatta starts on the bayside of the island, where Hobie Cat sailors cruise up the ICW, turn east into the Port Mansfield channel and into the Gulf of Mexico, then sail down South Padre Island to finish where they started. Another event, the Texas 200, held in mid-June in Port Isabel, features mostly homemade sailboats with shallow drafts. It’s been called a “rolling messabout” as sailors cruise up the ICW to the finish line at Magnolia Beach in Calhoun County, camping along the way.

I bought a small sailboat a few years ago to explore the Texas coast, and I still love the challenge of using natural forces—the wind, the water, and my body—to move from point A to point B. My personal dream is to put in at Port Mansfield, then sail across the bay and up the ship channel to the protected beach where Padre Island National Seashore ends. This stretch of shoreline offers some of the best surfing and fishing on the Texas Gulf Coast. Best of all, I’ll probably be the only one there.