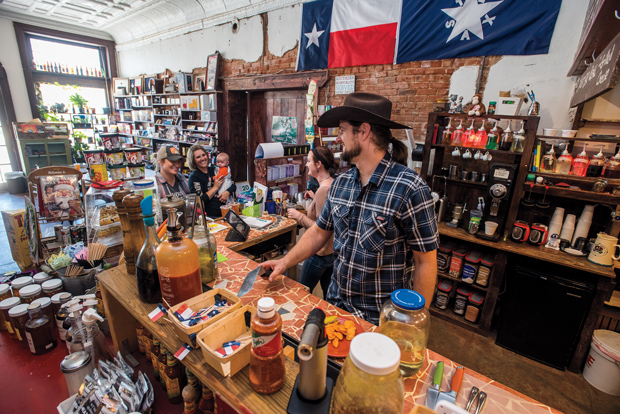 While gourmet coffee on Madison Avenue in New York City may sell for $24 a serving, you can sip a similar cup for $2 in the Eastland County town of Cisco at Waverly’s Coffee & Gifts, a cozy refuge in the center of this newly percolating community. “There are New York, Seattle, and Austin coffee shops. We are a Texas coffee shop,” says proprietor Sean Grose, who started a new life here in 2012 with his wife and daughter.

The Cisco Chamber of Commerce is located at 309 Conrad Hilton Blvd.
Call 254-442-2537;
ciscochamberofcommerce.com

Waverly’s isn’t the only reason to investigate Sean’s adopted hometown. “Cisco is kind of having a boom,” says John Williamson, innkeeper of Log Cabin Guest Haus. From the 19th-century two-story cabin he and his wife, Mary Kay, moved from Pennsylvania to the front yard of their restored Victorian home, visitors can experience Cisco’s history and its newfound identity. 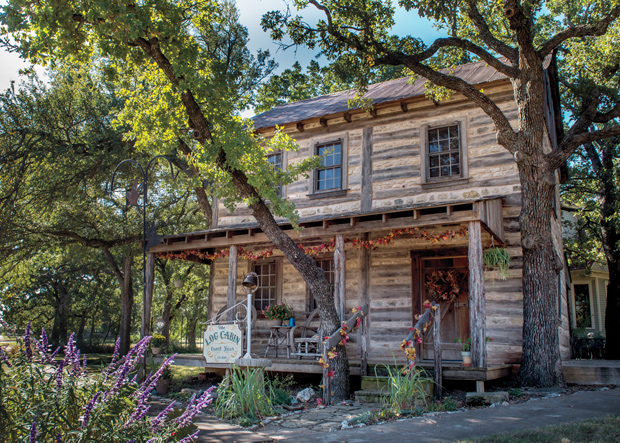 From the 19th-century two-story cabin he and his wife, Mary Kay, moved from Pennsylvania to the front yard of their restored Victorian home, visitors can experience Cisco’s history and its newfound identity.

In 1919, hotelier Conrad Hilton launched what would become his global chain here—buying the Mobley Hotel, doubling its capacity, and selling rooms in eight-hour shifts to accommodate oilfield workers. In the 1980s, the Mobley became the Conrad Hilton Center, a community space with a museum dedicated to Hilton’s legacy and the town’s past.

The “new” Cisco, on Interstate 20 between Fort Worth and Abilene, includes Red Gap Brewing Co., a destination for craft beer enthusiasts that opened in 2017. Shannon’s Burger Barn arrived in 2015, debuting its best-selling Sky Burger, topped with three cheeses, bacon, and jalapeños. The Spotted Zebra, a boutique with tin ceilings, contemporary women’s fashions, and home furnishings, opened downtown in 2014.
“When I came back here in the 1990s, it looked like a ghost town,” says Duane “Doc” Hale, the founder of the Lela Latch Lloyd Museum, which showcases area history not far from Cisco’s main drag. Arrowheads, pistols, swords, and other artifacts crowd showcases, and McClellan cavalry saddles hang from log railings. An antique upright Wurlitzer player piano still works; a 1905 Cyclone wooden washing machine does not. “Most of this stuff just came through the front door [from local donors],” says Hale, who named the museum for a revered public school teacher.

History had a role in naming the Red Gap brewery, too. A pioneer wagon camp known as “Red Gap” existed in the late 1870s before the town of Cisco was established along the route of the new Texas & Pacific Railroad. City leaders named Cisco to honor John Cisco, a New York banker who found financing for the railroad. Cisco flourished to the detriment of Red Gap, which was largely abandoned. 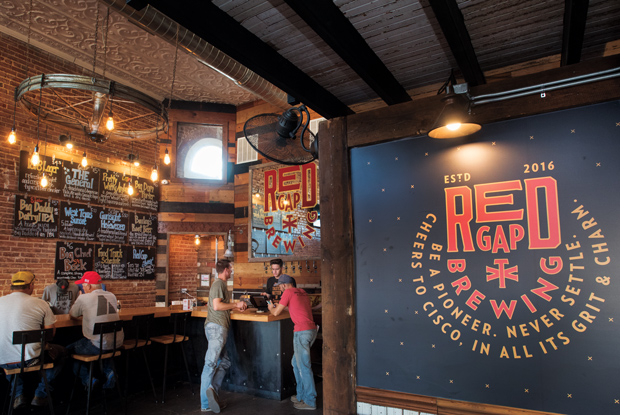 Brewery founders Ryan DeKok and Jason Mahon hail from the Fort Worth suburb of Keller. After Jason bought a ranch near the town, “we had a conversation on the front porch that this could become a destination like Fredericksburg,” Ryan recalls. Of Red Gap’s opening last year, he says, “There are 70 craft breweries in the Metroplex; we are trying to do something different and go somewhere else.”

A crowd lines the sidewalk before the taproom doors open at 5 p.m. on a Friday. Children sample the brewery’s root beer while families wait in the queue. Food trucks parked outside offer barbecue, tacos, or other street fare. The brewery’s most popular offering, a crisp lager called 1878, celebrates the year the Red Gap community came into its own. Customers have been known to boo on the rare evenings when the supply of 1878 sells out.

The migration of Sean Grose, his wife, Kasity Grose, and their daughter Ilya to Cisco to open Waverly’s preceded Red Gap’s arrival by five years. After losing their second child, the couple, who were schoolteachers in a small town near Lubbock, decided to seek a new life in Cisco. Observing the town’s empty storefronts, Sean envisioned a meeting place for residents—“A coffee shop that sells food rather than a restaurant that sells coffee,” he says. Named for his late daughter, Waverly’s Coffee and Gifts opened in 2012.

Waverly’s makes each cup of coffee from scratch, grinding roasted beans from Bright and Early Coffee of Bellville in a French press. Flavors like vanilla or hazelnut can be added for an additional fee, but the latte or the “Texpresso”—an outsize drink for long Texas drives—are also worth a try. For lunch, order the “Not Your Grandma’s Meatloaf Sandwich,” which Sean serves instead of a burger. He flavors the loaf with cayenne, jalapeño, black pepper, and chili powder and serves it sliced with melted pepper jack cheese on ciabatta bread. Waverly’s has a toy department, and shelves of books and curios. Kasity holds art classes, 8-year-old Ilya plays chess with adult patrons, and Sean moonlights as a minister at Cisco’s First Christian Church.

Both Ryan at Red Gap and Sean at Waverly’s cite Cisco’s history as critical to their choice to be part of its revival. One chronicler of Cisco’s past was late Western artist and horseman Randy Steffen. As Cisco Junior College’s first art teacher, he painted a 45-foot mural for the lobby of the First National Bank that illustrates the region’s transition from frontier to a modern energy and agricultural technology hub in the 1950s. It now hangs in the lobby of Prosperity Bank, First National’s successor, on loan from the junior college where more of Steffen’s works are displayed in the library. Also on loan to the bank: Steffen’s painting of the deadly 1927 robbery of First National in which one bandit wore a Santa Claus suit.

With its role in Cisco’s rebound unknown at the time, the two-story Mobley Hotel shuttered in the 1950s, long after Conrad Hilton sold it. Underwritten by the Hilton Foundation and others, a $1.2 million renovation was completed in 1986, anchoring downtown’s main street, which was renamed Conrad Hilton Boulevard. Though the Mobley’s interior was gutted, the brick exterior is original. Workers spared doorframes, some flooring, and transoms, which were reinstalled for a replicated sleeping room furnished with an iron bed, chests, and chairs from the 1920s. The community center’s museum features what curator Dixon Seider calls “our Santa Claus room,” with handcuffs, bullets, and photographs from the violent bank heist. 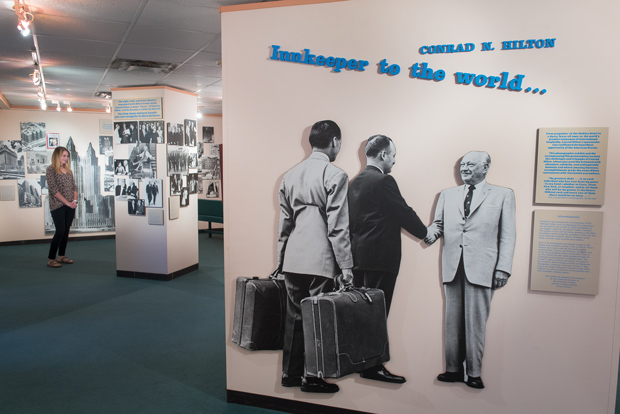 Though they have lived in Cisco for nearly eight years, the Williamsons jokingly describe themselves as “newcomers” in contrast to friends whose families span generations in the town. Their Log Cabin Guest Haus mixes rustic with modern convenience—a Keurig coffee maker, wide-screen TV, and sinks fabricated from washtubs. After serving a breakfast of egg casserole with a gentle knock on the cabin’s back door, they often make their way to their Log Cabin Collectibles store across from Waverly’s.

Parishioners at the Grose’s church, the Williamsons believe Waverly’s helped ignite the current revival of Cisco, based in part on its $2 coffee. “We’re not out to get rich,” Sean says. “We’re just in it for the sheer joy of serving neighbors, friends, and passersby.”

What to do and see in Cisco

When visiting a small town, it’s good practice to be mindful of odd or unusual operating hours, so we’ve compiled all the essential and logistical info you would need to have a successful trip to Cisco. If you ask us, a Friday-Saturday sojourn is the way to go.

Insider tips for getting the most of your experiences at some of Cisco’s hotspots.

When diners order the 11-oz. Sky Burger at Shannon’s Burger Barn, it comes with directions: “I tell customers to cut it in half and get your first bite out of the middle,” says Alisha Bridges, daughter of co-owner Shannon Bridges. That way you’ll get to taste signature three-cheese and bacon filling at once, making for the perfect bite.

At Red Gap Brewing, take a “flight” with four samples from Red Gap’s eight offerings, $9. They may range from “The General,” a pale ale, to “Big Dam Porter,” dark brown and slightly creamy. Ryan DeKok’s father was an Air Force General; “Big Dam” refers to the dam that created Lake Cisco in the 1920s. A recent Texas law permits tasting rooms like Red Gap’s without running afoul of local restrictions on alcohol sales.

Have fun with the $5 grilled cheese sandwich at Waverly’s. Divide the sandwich in half and see how far you can stretch the melted muenster before it breaks apart. The informal record is 22 feet.