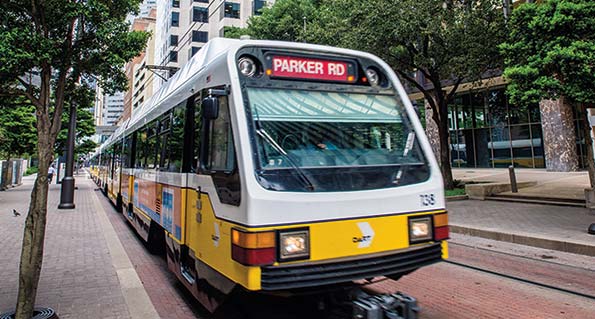 If your kids are like mine, they’re fascinated by trains. Perhaps it’s the powerful sound of the horn at crossings, the rumble of locomotives chugging alongside the highway, or the magic of an unusual sight found mostly in cartoons, movies, and storybooks.

Maybe it’s just the allure of traveling without seatbelts. Whatever the reason, children love trains—and so do many of us grownups.

The Dallas Area Rapid Transit (DART) light-rail system includes 90 miles of track and 62 stations along four color-coded lines. The system, which recorded 96,380 passenger trips per weekday in 2014, bustles with commuters on a daily basis. But it also provides an entertaining and convenient way to explore the Dallas area, offering access to a variety of the city’s attractions. For my six- and nine-year-old sons, the light-rail journey is half the fun. Here are five family-friendly destinations that justify climbing aboard.

This station is just steps from the entrance to the Dallas Zoo, which is open 364 days a year. (Even the animals get Christmas off.) It’s home to some 2,200 animals representing more than 500 species. Memorable exhibits include Giants of the Savanna, which features lions, elephants, and zebras in naturalistic habitats. Children enjoy the opportunity to feed giraffes by hand from a platform that provides eye-to-eye interaction. Through September 7, the zoo is also showcasing more than 25 roaring, animatronic dinosaurs in its Giants of the Jurassic exhibit.

This is the only underground station in the DART system, with tracks that are 10 stories below street level. The six escalators that carry riders from the platform to the surface are the longest your kids (or you) may have ever seen; four are 138 feet, which made them the longest escalators west of the Mississippi when the station opened in 2000, according to DART. As if that weren’t enough fun, you can also ride the inclinators—elevators that travel on an incline. Their walls are windows, prompting kids to press their noses to the glass and watch their destination draw closer. 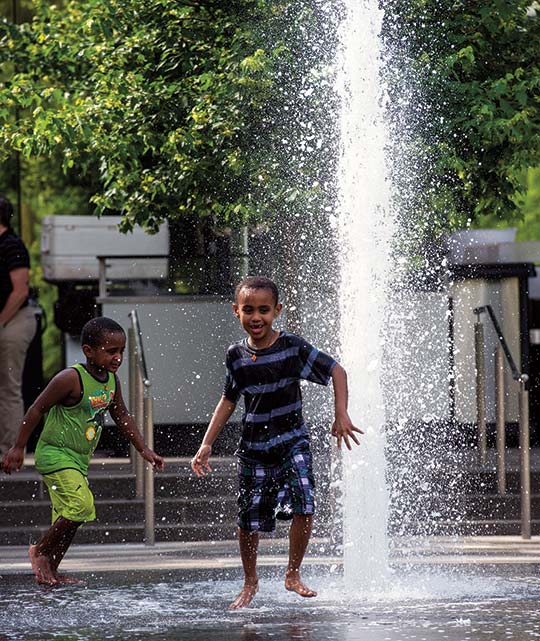 Once you reach the surface, you can hop on the M-Line Trolley. Its six vintage streetcars run through the Uptown neighborhood between Cityplace/Uptown Station and downtown Dallas. Stops along the way include the chic West Village Shopping Center and Klyde Warren Park, a five-acre green space built over a freeway that offers everything from a playground and ping-pong tables to concerts, croquet, and food trucks.

This station is so close to Babe’s Chicken Dinner House that your nose will lure you there as soon as you step off the train. Babe’s has an ultra-casual atmosphere and a simple menu—five entrées, including fried chicken and chicken-fried steak, and six sides, such as mashed potatoes and green beans—all served family-style. If you have trouble getting your server’s attention, it’s likely because he or she’s engaged in one of the periodic renditions of “The Hokey Pokey,” which your kids will be invited to join. Babe’s opens 11 a.m.-9 p.m. daily, but closes between 2 and 5 on weekdays.

For dessert, stroll across the square to Bloom’s Candy & Soda Pop Shop, where more than 800 varieties of candy—think Goo Goo Clusters and Double Decker Moon Pies—and 250 bottled sodas, such as Sioux City Sarsaparilla, dazzle the eyes. No matter how varied your family’s tastes, everyone will find something to satisfy their sweet tooth. Bloom’s is open until “8-ish” Sunday to Wednesday and “9-ish” Thursday to Saturday.

This station is right next to Haggard Park, where you will find two things important to all young families: playgrounds and restrooms. If you want to maintain the train theme, you can also visit the Interurban Railway Museum, a monument to the electric trains that linked regional towns from Waco to Denison in the first half of the 20th Century. Admission is free, but the hours are limited: 10 a.m.-2 p.m. weekdays, 1 p.m.-5 p.m. Saturdays. On the other side of the tracks is downtown Plano, a quaint historic district with restaurants—Kelly’s Eastside offers a comfortable patio and a wide-ranging menu of sandwiches and burgers—and boutiques, such as La Foofaraw, an antiques, home décor, and floral shop.

In the heart of downtown Dallas, this station is just a few blocks from Klyde Warren Park, the Dallas Museum of Art, and the Nasher Sculpture Center. The Dallas Museum of Art offers free general admission, while the Nasher is free for children younger than 12 and $10 for adults. Both museums offer an array of activities for children, including activity tote bags at the DMA and the Nasher’s family programming and free entry on the first Saturday of each month.

Before going back to the DART station, mosey to Klyde Warren Park for a snack and to encourage the kids to burn some energy before boarding the train—all the better to enjoy the ride.