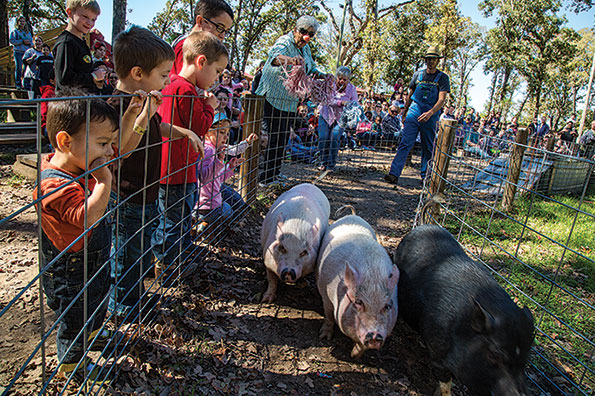 They run at vastly different speeds, but all seem to sense the competition as they dash down the pig-racing track. Their loud, shrill squeals almost drown out the cheering of the enthusiastic spectators. By the end of the race, the multigenerational crowd has lost track of which pig is which, making the winner’s identity uncertain. Nobody seems to care, though—they’re having too much fun. YesterLand Farm does that to people.

Located outside of Canton, roughly midway between Dallas and Tyler, this working farm draws visitors in the fall and early winter with its pumpkins and Christmas trees, as well as a whirlwind of rides and attractions. While most visitors venture to YesterLand Farm from the Dallas-Fort Worth area and East Texas, vehicles in the parking lot bear license plates from places as far-flung as Canada and Mexico. 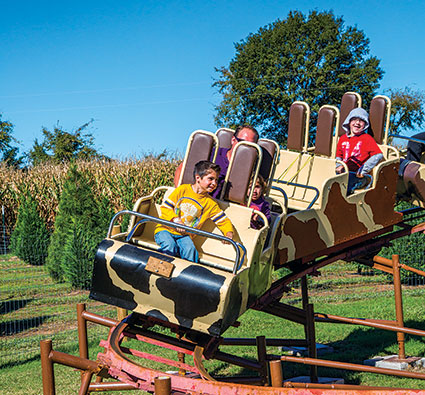 Covering 42 acres of rolling countryside, YesterLand Farm provides a county-fair experience rich in the romance of East Texas and old-time rural entertainment. Owners Chuck and Kama Bozeman aim to provide visitors with a range of family-friendly activities, from carnival rides to a corn maze—all timed to make the most of comfortable fall weather and the arrival of the holiday season. “We look to local history for our inspiration at YesterLand Farm,” Kama says.

After purchasing an unimproved tract of land in 1994, these first-time farmers from Dallas planted Christmas trees, inspired by friends who were in the same business. Chuck was a career firefighter in the Dallas suburb of Rowlett, while Kama worked as a medical administrator and real estate appraiser. The Bozemans, with their two children in tow, made the move to Canton in 1998, still working their full-time jobs while operating the farm.

“We were ready to get out of Dodge and get to what we thought was a slower pace of life,” Kama says. “And then we figured out that your pace of life is what you make of it, because the farmer’s job is never done.”

Both Chuck and Kama eventually left their jobs to make the farm their sole occupation. Neither has looked back. Meanwhile, what opened as a cut-your-own Christmas tree farm in 2000 has grown into an entertainment venue that—as its name promises—traffics heavily in nostalgia. The atmosphere hearkens to an earlier, less complicated era of family entertainment. YesterLand Farm first added a hayride for Christmas-tree customers, then a barrel train, a pumpkin patch, and antique amusement rides. Over time, the annual Fall Festival grew into YesterLand Farm’s most popular offering.

“We thought if people were going to make the effort to drive from Dallas, we wanted to add more to offer them for their effort,” Kama says. “We need to give them plenty of ‘wow’ factor.”

The Bozemans travel the country hunting for antique amusement park rides, along with the spare parts and leads on technicians who restore them. The treasure hunt dovetails neatly with their aim of entertaining through the wonders of nostalgia. “People want to have their children experience the wonderful things that they experienced as a child,” Kama explains. “We love that we have the old rides and can show people what it was like years ago.”

If you’re not inclined to board an amusement ride, YesterLand Farm also offers non-mechanical entertainment. Children can mingle with the barnyard animals in the petting zoo, scamper around the playground, get lost in the corn maze, or take a pony ride. There’s also a Western ghost town, a pumpkin launcher, and the ever-popular apple cannon, which visitors use to shoot apples at targets. And of course, the aroma of popcorn, funnel cakes, and corn dogs serves as a constant reminder that there’s plenty of food to eat. YesterLand Farm’s traditional fair-food offerings also include turkey legs, smoked brisket, roasted corn, and fresh-squeezed lemonade.

Brian Kimble, a youth pastor from Royse City, says the variety of the entertainment keeps his family coming back to YesterLand Farm. “We’ve been here every year for four years for Christmas trees, Santa Claus, and pumpkin patches,” he says. “We’ve loved it every time. The environment is so family-friendly, and the kids don’t get bored. All these rides and attractions keep them entertained, and it keeps us parents entertained as well.” 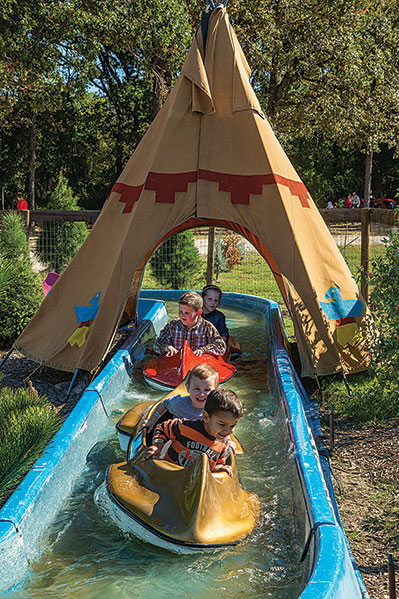 Although parents, grandparents, and even great-grandparents get a kick out of YesterLand Farm, it’s the little ones who really eat it up. Boredom isn’t an issue for eight-year-old Sophia Green, following her experience doing everything from mining for gemstones to riding a pony and taking a delightfully bumpy hayride. “It’s awesome,” she gushes. “There are so many fun roller coasters and rides that I just love it here.”

Families or groups can reserve one of the four campfire sites at the farm, and visitors can bring their own hot dogs and s’mores ingredients to roast over the flames. The campfires are part of YesterLand Farm’s appeal for city dwellers who don’t get many opportunities to experience elements of a rural and rustic lifestyle. “This is the first time I’ve ever seen a campfire,” remarks one appreciative Girl Scout, who visited the farm with her troop. Another scout has her first real-life exposure to a cow in YesterLand Farm’s petting zoo. “I didn’t know cows are so big!” she exclaims.

One of YesterLand Farm’s major attractions is the annual Pumpkin Smash-O-Rama, held during the final weekend of Fall Festival (November 8-9 this year). The event makes use of the farm’s leftover pumpkins. Employees drop pumpkins from a 30-foot-high boom truck, causing a messy explosion of pulp, stem, and seeds. A monster truck crushes other pumpkins, while visitors have the opportunity to hammer others with mallets. The weekend also features the “Pumpkin Games,” including pumpkin hockey, pumpkin bowling, pumpkin checkers, a pumpkin toss, and sack racing.

During the off-season, when the farm is closed to the public, the Bozemans take their amusement rides on the road to events such as school and church carnivals, and birthday parties. You’ll also find the Ferris wheel and Pirate’s Revenge ride at Canton’s First Monday Trade Days every month. This year, the farm will open a new barn for special events, and add two new pumpkin launchers and a shooting gallery for its two apple cannons.

“We’re about family time together,” Kama says. “Come out, put your cell phones away, and enjoy connecting with one another. That’s something we’re losing touch with in this day of immediate gratification. We just need to slow down and enjoy each other’s company. That’s what we’re all about.”