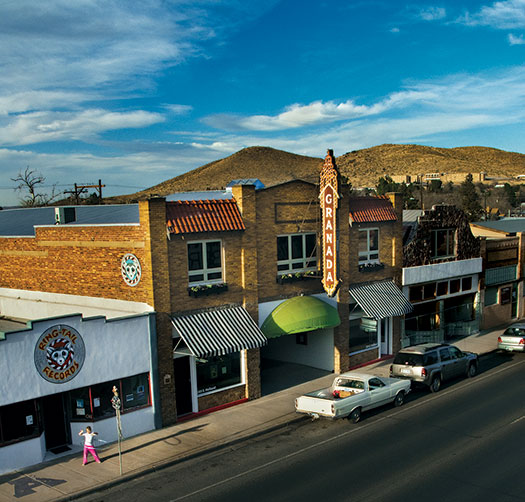 Sunday mornings in the West Texas town of Alpine are remarkably quiet for a community with a population of around 6,000 people.

Sounds that arise after sunup—a dog barking, church bells, a railroad crossing guard—seem softened in the high elevation air, as if the surrounding mountains muffle the usual cacophony of city life to a gentle serenade. A walkabout among Alpine’s quiet streets validates the apparent calm. You may see the occasional jogger trot by or a rumbling cattle truck with its trailer of braying calves, but for the most part the avenues of Alpine are still on Sunday mornings. Storefronts have yet to open and the two blinking red lights, the only traffic lights in town, flash over empty intersections. Eliminate the color in this landscape and you’d have a black-and-white image of Alpine streets circa 1950, as if nothing had changed since. Return to color and you’d see the photorealist’s ideal painting—the motionless street, a traffic light mid-blink, an unpopulated corner, the train at rest on its tracks; in other words—life in repose.

Not everyone sleeps in, however. Fortunately, someone has been up for hours preparing to satisfy your midmorning hunger. Drop by the Century Bar and Grill, located on the first floor of the historic Holland Hotel, for Sunday brunch. In addition to a menu that includes the “Texan Benedict,” the classic egg dish reimagined with brisket hash and chipotle cheddar cheese sauce, the Century offers a range of entrées and settings to satisfy your particular morning whim. Have a seat at one of the “Chef’s Tables,” comfortable, leather-bound booths beneath a panorama by Texas Regionalist Xavier Gonzalez, on loan from the Museum of the Big Bend. Or enjoy the summer weather from the courtyard featuring a Saltillo-tiled patio and a decorative fountain reminiscent of a Spanish hacienda.

After brunch, wander into the Holland’s lobby to admire the details. The El Paso firm Henry C. Trost Ar-chitects & Engineers completed the two-story Spanish Colonial Revival hotel in 1928. Trost’s firm was responsible for a number of historic buildings in the region, including the Gage Hotel in Marathon, Hotel Paisano in Marfa, and Hotel El Capitan in Van Horn. The Holland, recently renovated and restored to its early 20th-Century charm, offers 24 guest rooms and suites including a rooftop penthouse.

Alpine’s history is also on display at the Museum of the Big Bend, located on the campus of Sul Ross State University, a 2,000-student institution in the Davis Mountain foothills overlooking the city. The museum, which is open Tuesday through Saturday and on Sunday afternoons, highlights the region’s rich cultural and natural heritage beginning with its prehistoric period. A geology and paleontology exhibit examines the forces that gave rise to the surrounding desert mountain landscape and granted the Big Bend its physical character. Several exhibits explore the arrival of human inhabitants and the Native American people who called the region their home. Other exhibits feature nearby Fort Davis and the Buffalo Soldiers who served on the frontier post, as well as the cowboy culture that dominated the countryside during the late 19th and much of the 20th centuries.

But a visit to Alpine isn’t just for Sundays. Unlike the relative calm that Sunday brings to the town, Saturday nights rock with a lively assortment of entertainment. Indulge in the Alpine music scene and grab a table at Railroad Blues. Arlo Guthrie, Joe “King” Carrasco, Asleep at the Wheel, and Ray Wylie Hubbard are a few of the musical talents this 30-year-old bar has hosted since it became a music venue in the 1990s. In July, the Blues serves as a showcase stage for Viva Big Bend Music Festival, an annual region-wide party with musical events in Alpine, Marfa, Fort Davis, and Marathon (July 24-27 this year).

Back on Holland Avenue, you’ll find the Saddle Club, which opened in 2010. The Saddle Club offers a selection of small plates designed for sharing, as well as occasional live music. The menu changes seasonally, but you can always order the “Epic Fries,” which come smothered in queso, chopped barbecue brisket, roasted red pepper aioli, green chile sauce, bacon, and green onions. Claim a seat at the colorful, handcrafted wooden bar or enjoy Alpine’s clear night skies from the patio. Or, if the evening is particularly warm and wonderful, make your way down Holland Avenue to Harry’s Tinaja. This beer and wine garden offers live music, an indoor bar, and plenty of outdoor seating under shady elm trees.

If you’re a baseball fan, you may want to spend the first few hours of your Saturday evening rooting for the home team. The Alpine Cowboys, a member of the independent Pecos League, play their home games at Kokernot Field in a season that runs from May through July. Constructed in 1947 by Big Bend rancher Herbert Lee Kokernot Jr., the stadium features native stone quarried from Kokernot Ranch and provides a tranquil view of the mountains on the horizon. Along with the Cowboys, the field also hosts teams from Sul Ross State and Alpine High School.

While ballpark franks may be standard stadium fare at the Kokernot, you could also get your fill before the game at the Cow Dog, a gourmet hot dog food truck. The Cow Dog can usually be found parked alongside Alpine’s coffee and pastry hangout, Plaine Coffee, on Holland Avenue. Pick up a “Bad Dog,” a grilled beef frank topped with chopped green chiles, pepper jack cheese, and Sriracha sauce. Or try the “Artisan,” with apple-apricot chutney, sharp cheddar, and white wine Dijon mustard.
Better yet, order both and wash them down with a bottle of Squirt. You’ll be fortified for a tour of Alpine’s arts scene, which is on display at local venues like Kiowa Gallery.

Kiowa Gallery, the brainchild of local creative talent and businesswoman Keri Blackman, is in its third decade of exhibiting works by regional painters, photographers, sculptors, jewelers, and craftspeople who draw inspiration from the far West Texas landscape. The art isn’t only on the inside walls, however. Kiowa’s exterior western façade features a heritage-filled panoramic mural of Alpine and the Big Bend by artist Stylle Read. Last year, the renowned Texas muralist painted a new mural for Alpine on the south-facing wall of the Printco building, located at a right angle to the Kiowa mural. In a nod to the importance of Big Bend’s Hispanic heritage, Read appropriated the work Poco y Poquito by Jesus Helguera, a classic image from the calendars of old Mexico, and added a depiction of one of Alpine’s own landmarks—Our Lady of Peace Catholic Church.

Our Lady of Peace, the anchor of Alpine’s historic south side, lies a few blocks beyond the local train station, which was constructed in 1946. An Amtrak passenger train, the Sunset Limited/Texas Eagle, makes tri-weekly stops here. Visitors arriving by train will find overnight accommodations and an entire weekend’s worth of entertainment within walking distance from the station.

But whether you’re traveling by train or car, Alpine’s lively days and entertaining nights are reason enough to make it an ideal summer destination, even if all you’re looking for is a place to enjoy a quiet Sunday-morning stroll.