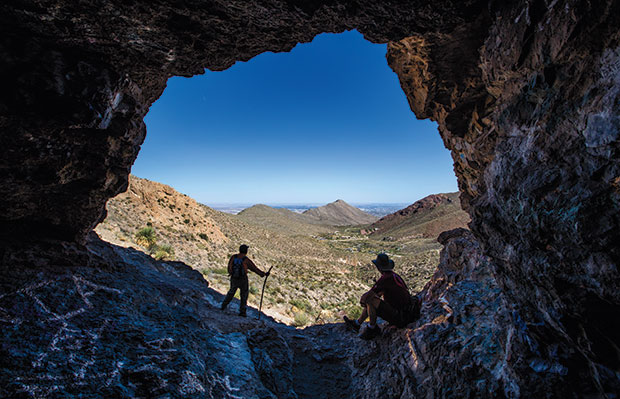 El Paso, the state’s westernmost and perhaps most historic urban center, has served as a crossroads of the Americas for more than four centuries. The city rises from the banks of the Rio Grande borderlands in fine, venerable homes and landmark buildings while contemporary construction ascends the surrounding desert mountains.

Rio Grande Trail North. Access at trailheads designated along the trail at various locations. Open from dawn to dusk.

The metropolis fills the river valley until it reaches a natural pass through the mountain range, spilling across the state line toward the pueblos and Spanish Colonial cities of modern-day New Mexico. The expansion follows in the footprints of explorers, traders, Native Americans, and settlers who began traversing the same route hundreds of years ago. Despite its Texas city status, El Paso is as much a part of Mexico as it is a part of the American Southwest, a fact clearly seen in its architecture and culture, reflecting a unique balance between our distinctly Texas core and the world beyond our borders. But the city is balanced in another way that may surprise you. El Paso harbors a natural world alongside its more celebrated citified one, offering nature enthusiasts a chance to explore a native desert environment among all the comforts and attractions of city life.

To experience some of El Paso’s natural highlights, start with Keystone Heritage Park. Established around an important archeological discovery made in the late 1970s, Keystone preserves buried remains of small, single-room brush huts that, together, comprised a large village more than 4,000 years ago. It is considered one of the oldest Middle-Archaic sites in the western United States. For centuries, the area has witnessed cultural change: as a crossing route between mountain ranges, as the site of Keystone’s ancient village, as a center of Spanish colonization and Anglo settlement, then as a staging ground for the construction of the coast-to-coast Santa Fe Railroad. Preservation-minded El Pasoans, including Keystone Heritage Park founder and board President Bernie Sargent, began negotiating in 1982 to safeguard the site, collaborating with local, state, and federal agencies as well as private property owners. After 20 years of working toward their goal, Sargent and his group of dedicated volunteers succeeded, creating an archeological preserve, nature center, and botanical garden that opened to the public in 2002.

Today, the park protects the buried archaic remains—essentially the outlines of huts, their post holes, and fire pits—as well as nearby wetlands, considered the last remaining natural wetlands in El Paso County. Keystone offers an interpretive experience led by volunteers who provide an understanding of the site’s importance, as well as self-guided tours of the wetlands, where you’ll spot a substantial number of bird species. In addition, Keystone features the artfully landscaped El Paso Botanical Garden, where medicinal plants, a culinary garden, cactus and succulent gardens, and a butterfly garden explore the many facets of the surrounding Chihuahuan Desert. In total, Keystone conserves 52 acres of native desert habitat within the city limits.

Shadowing Keystone’s horizon (in fact, the entire city’s horizon), are the jagged peaks of the Franklin Mountains. Despite a population of more than half a million people, El Paso lies at the base of a wild, undeveloped range featuring some of the oldest rock in Texas. The Franklin Mountains are both ecologically and culturally significant and provide a development-free, natural backdrop to the busy city. Thanks to the efforts of El Paso conservationists and the Texas Parks and Wildlife Department, much of the Franklin Mountains is protected as Franklin Mountains State Park, which covers more than 40 square miles. Transmountain Road (also known as Texas Loop 375) bisects the range, cutting through the state park and the adjacent Castner Range, providing access to trailheads popular with both hikers and mountain bikers.

Located along the range’s southern slopes, the state park’s McKelligon Canyon gives hikers a chance to tackle the Ron Coleman Trail. The canyon and trail, accessed easily from neighboring city streets, serve as both workout circuit for many El Paso fitness buffs and popular hiking challenge for weekend warriors. The trail requires hikers to negotiate some of the steepest, rockiest terrain in the mountain range. A few resting spots along the trail are strategically located inside shallow, natural caves. Despite the abundance of graffiti, the trail highlights local plants and wildlife like the Southwestern barrel cactus and the greater earless lizard, and also offers a hawk’s-eye view of the city.

Far below along the foothills, the El Paso Museum of Archeology and Wilderness Park hosts more than 200 plant species in a 15-acre garden that exemplifies biodiversity in the Chihuahuan Desert. Inside, the museum explores 14,000 years of history that evolved throughout the El Paso region, the American Southwest, and northern Mexico.

Despite the considerable geographic expanse, the vast timeline, and the diversity of peoples that populated the landscape, you’ll find that nature connects them all. From the beadwork flower motifs, bird-shaped vessels, and stone animals that you’ll see on display in the museum, to the mountain, rain, and lightning spirits depicted in paintings and dioramas of sacred ceremonies, it’s clear that nature dominated our ancient world. 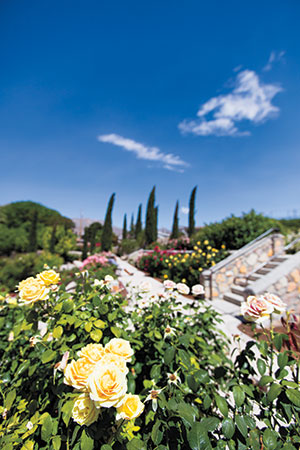 The El Paso Municipal Rose Garden opened to the public in 1959 and now encompasses more than three acres.

In another one of the city’s natural enclaves, humans have taken the lead, wielding an influence over nature in the name of sheer beauty. The El Paso Municipal Rose Garden features almost 1,500 rose bushes and more than 400 varieties of roses thriving across a meticulously manicured garden. A waterfall, koi pond, wheelchair-accessible walkways, and lush arbors provide a stage for the plush display, a carefully organized network of beds featuring colorful roses with names like “Sunsprite,” “Pink Cascade,” “Marilyn Monroe,” and “Fragrant Cloud.” The Rose Garden first opened to the public in 1959 on 1 1/2 acres, the result of cooperation between the city and the El Paso Rose Society. Today, at more than twice the size and twice the roses, the garden is maintained by volunteers who prune, weed, and lead group tours through the garden during ideal blooming periods.

Next, leave the city traffic behind and experience a blend of native river habitat with El Paso’s suburban and industrial character via a stroll (or bicycle ride) on the Rio Grande Trail North, part of a still-developing Parks and Recreation Department greenbelt project. Not only does it offer a panoramic view of the Franklin Mountains, but it also provides unparalleled fitness and recreational opportunities. Currently, the trail winds approximately 10 miles from Country Club Road in the Upper Valley north to the Texas/New Mexico state line in Anthony, meandering alongside the banks of the Rio Grande. Birds abound, as do benches, which give birders and cyclists a bit of respite under canopies of shady mesquite. The trail, separated from urban activity by levees, provides a back-door view of homes, businesses, and factories while offering quiet solitude for cycling, jogging, and family walks.

El Paso is bound by valleys as well as mountains, including the Upper Valley to the north, where the metropolis eventually gives way to agriculture; and Mission Valley to the southeast. Mission Valley, named for the historic missions and presidio chapel established after the 1680 Pueblo revolt in present-day New Mexico, is dominated westward by the Ysleta Pueblo and its surrounding suburban development. But eastward you’ll find the more relaxed town of San Elizario and its historic district. This sleepy agrarian community comes alive on weekends when shops, taquerias, and galleries open their doors to visitors, particularly on the first Friday of each month during the San Elizario ArtWalk. The San Elizario Presidio Chapel, established in 1789 by the Spanish and named for the French patron saint of the military (Saint Elcear), often adds to the festivities by hosting events of its own. Just outside of town, a managed natural world takes over with miles of pecan farms creating an abundant patchwork of orchards. Several farms have set up shop, selling the fruits of their harvest online and in local stores, as well as every Saturday at the El Paso Downtown Art and Farmers Market.

The market, located in the city’s Union Plaza District, is a good place to sample the local produce. One of the market’s most community-oriented vendors is the Bowie Jardin, Cocina y Mercado. Developed by students at El Paso’s Bowie High School along with leaders of local nonprofits and businesses, the concept integrates a community garden with a culinary arts program. Students learn environmentally friendly growing techniques, how to prepare nutritious meals, and how to conduct business in an equitable and smart way. The project promotes healthy living, literally from the ground up.

The city, considered part of the largest international metroplex in the world, has been a destination of choice for travelers since the end of the 16th Century, perhaps because it had so much to offer the travel-weary as they struggled to negotiate a difficult voyage. Today, whether you’re on the road or on vacation, El Paso offers endless modern convenience at your fingertips. Thanks to the city’s abundance of parks, natural habitats, and outdoor recreation, El Paso complements this good life with a healthy life, naturally.