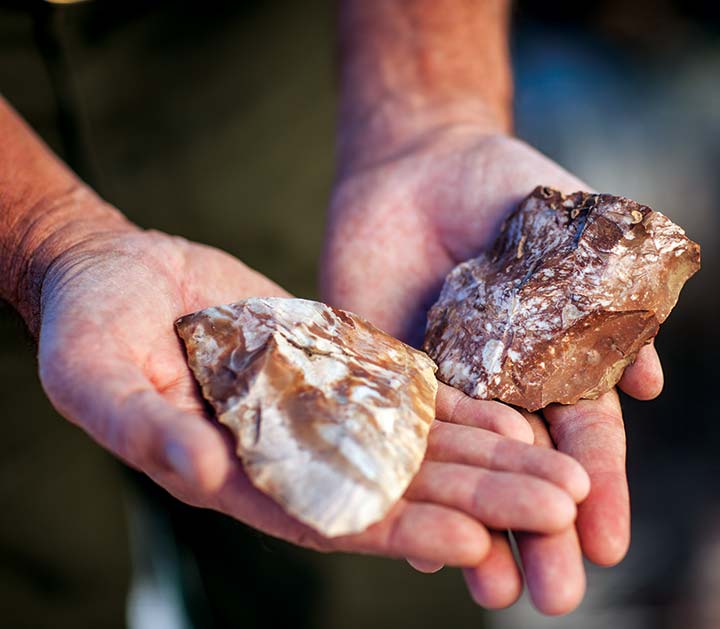 National Park Ranger Marten Schmitz retrieves a palm-sized chunk of Alibates flint rock from the dried short-grass prairie. “Here’s a good example of a trade blank,” he says, noting that pieces like this colorful red-and-white stone were prized as currency for people who lived in this region as far back as 13,000 years ago.

Flakes of discarded flint litter the ground on this mesa about 35 miles north of Amarillo, hinting at the historical value of the quarries, which are now protected as part of the 1,000-acre Alibates Flint Quarries National Monument.

“We know that people have been collecting from the mesas for a long time,” Schmitz says as I run my fingers over the smooth, glassy stone and contemplate the ancient hands that chipped away at raw chunks of flint to craft tools, points, and trade blanks. “Spear points made from Alibates flint have been found in woolly mammoths and other Ice-Age era mammals that have been extinct for thousands of years.” 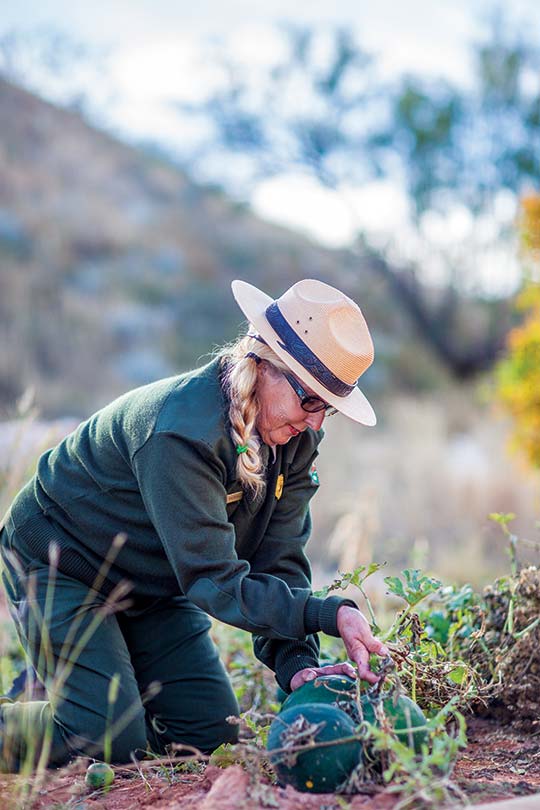 Located on the high mesas overlooking the Canadian River in the Texas Panhandle, this cache of flint was harvested by native people to trade for other items of value. Alibates (pronounced AL-ih-bates) flint is unique to this 60-acre patch of ground within the Canadian Breaks, where the river cuts a jagged path through the Great Plains. Flint tools and currency from here have been found as far north as Canada, south to central Mexico, east to Minnesota, and west to the Pacific Coast. In turn, items like pottery from Arizona, pipestone from Minnesota, and abalone shells from the Pacific Coast have been excavated at this site.

Alibates Flint Quarries National Monument—the only national monument in Texas—limits access to the quarries to participants in ranger-led tours, which muster at the visitor center. On my mid-week visit, the area is empty except for the monument employees and a friend who has joined me for the half-mile hike to the mesa, a climb of 170 feet. Part of the beauty of the place is that it’s uncrowded and largely undeveloped. Visitors get a real sense of what the area has been like for eons, and of the scenery and bounty that ancient people found in this area.

President Lyndon B. Johnson signed legislation creating Alibates Flint Quarries National Monument in 1965. Its 1,371 acres adjoin the 45,000-acre Lake Meredith National Recreation Area. Historically, the lake covered more than 10,000 acres and was clearly visible from the mesas of the monument. Because of a long-term drought, the lake has shrunk by more than half, but visitors to the recreation area still can hunt, fish, hike, canoe, and kayak. This year, rangers at Lake Meredith began offering kayak tours of the canals and wetlands around the recreation area.

The ribbon of water that flows through the Canadian River bottom is beautiful during my autumn visit. From the hilltop where we stand, I scan the landscape and see the big cottonwoods and soapberries with their golden leaves. Each season has its nuances here. In winter, the white cottonwood limbs contrast against the deep blue sky. As winter gives way to spring, frequent snowfalls blanket the mesas and river bottom, the moisture feeding the river and propagating green prairie grasses and a flush of wildflowers. The river, mesas, and canyons are a haven for wildlife like mule deer, whitetail deer, and wild turkeys. It’s not hard to see why people frequented the area for tens of thousands of years. Everything needed for sustenance is right here, and the tools to harvest and process fresh meat are relatively easy to obtain.

If Schmitz hadn’t shown us, I would have never recognized the shallow pits pocking the prairie as being quarries. Since the flint lies just below the surface, the quarries are oblong depressions that are a dozen or so feet wide and three or four feet deep. Time and incessant Panhandle winds have filled some of the deeper quarries with soil, making them even shallower. However, where the horizontal veins of flint intersect with the mesa’s sloping diagonal faces, you can see thick slabs of the rock in its raw state. 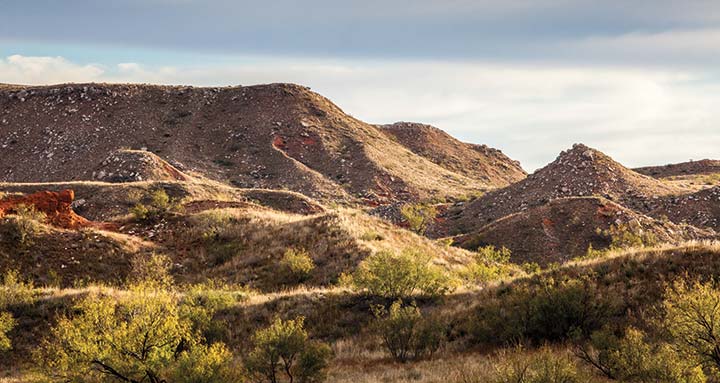 Scientists aren’t completely certain how this one-of-a-kind flint was formed, but the most common theory is that volcanic eruptions about 670,000 years ago in the Yellowstone area of Wyoming dropped clouds of silica ash over dolomite rock in the Panhandle. As water percolated through the soil, the silica dissolved and soaked into the dolomite, replacing the calcium magnesium carbonate in the rock and leaving flint.

While humans apparently never lived directly on the quarries, they did live nearby. There are tipi rings in the area, and evidence of a resident human population can be seen within a few hundred yards of the quarries. Schmitz points to a line of rocks jutting from the soil, explaining that they were part of the foundation of a rock dwelling built by the Antelope Creek people, who inhabited the mesas here between 1200 and 1450. They used stones to create foundations and walls for their multi-room homes.

Near the foundation stones, Schmitz shows us what I think is the pinnacle of our day afield—petroglyphs. Carved into the stone, several circular divots in a random pattern are clearly visible. Another figure looks like the body of a nondescript animal. The most impressive pieces of rock art are a pair of long human feet drawn horizontally across the rock’s face, and on the south end of the collection of boulders, a depiction of a turtle. I quietly wonder about the people who carved the art and its significance.

Soon, we are headed back to the visitor center, which lies one-and-a-half miles northwest of the quarries and the ancient ruins. Ranger Gigi Amerman meets us at the center, where displays of Alibates flint, a bookstore, and interpretive posters educate visitors about the area. She tells us that of the approximately 5,000 people who visit the quarries each year, many come from other states or countries.

Amerman leads us through the interpretive garden in front of the visitor center. As she shows us a melon from the “three sisters” garden, she explains how Native Americans often planted beans, corn, and squash together—the “three sisters”—because each crop’s agricultural qualities naturally complement each other. Such gardens were common in the dry climate of the Panhandle.

“This garden is an educational tool to teach visitors about several things, including xeriscaping and edible and medicinal plants,” she says. “And we serve as a certified way station for the monarch butterfly migration.” Each fall during the butterfly migration, the staff captures and tags the monarchs with a tiny badge that’s placed on the underside of the hind wing. After their release, the butterflies continue their migration as far south as central Mexico.

As we drive past the mesas of the Canadian Breaks toward the monument exit, I marvel at the cultural significance of the site and the many unknonwns of the ancient world. Who first recognized the value of this flint so long ago? What happened to the Antelope Creek people? How many times did a piece of flint trade hands between Texas and Canada? While such questions can never be answered, these mysteries are a big part of what make Alibates Flint Quarries National Monument so intriguing.