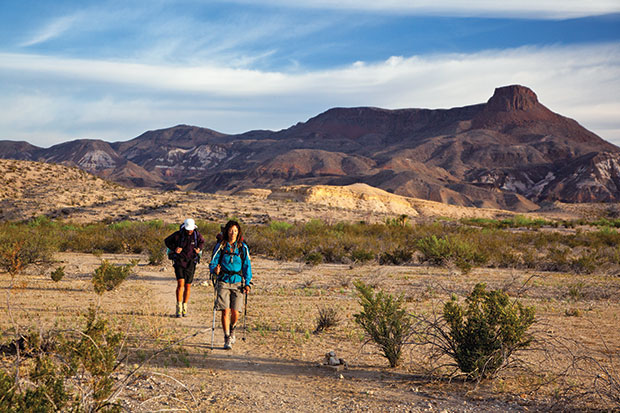 When William Hennessy, a guide at Far Flung Outdoor Center in Terlingua, called me out of the blue with an idea for a Big Bend adventure, my interest was piqued.

The Mesa de Anguila hike is an extremely challenging hike that requires great route-finding skills. USGS topographic maps of
the mesa are necessary for finding routes, along with a compass and/or GPS unit.

If you are not an experienced backpacker, try this hike only with experienced friends or with an outfitter such as Far Flung Outdoor Center (800/839-7238; www.bigbendfarflung.com). The entire hike is in the Chihuahuan Desert with very little shade; it’s best done from October to March. Plan to carry at least one gallon of water per person per day in addition to backpacking gear and food. See www.nps.gov/bibe.

For more details about activities, lodging, and outfitters in the Big Bend, see www.visitbigbend.com.

“I want to take you to the best view in Texas,” he told me. “We’ll hike all the way across Mesa de Anguila and overlook Santa Elena Canyon at its confluence with Fern Canyon on the Mexican side of the Rio Grande.”

I had written a guide to hiking in the Big Bend, but I had never hiked this far across Mesa de Anguila, which rises in the remote western corner of Big Bend National Park, far from the park’s visitor centers. In Spanish, anguila means “eel,” but some linguists think the name could be a corruption of ángel (angel) or águila (eagle).

“A better view than from the South Rim or Emory Peak?
Or Guadalupe Peak in Guadalupe Mountains National Park?” I asked, thinking William was setting a high bar.

I’d always wanted to overlook Santa Elena. I’d floated through the gorge several times, plus hiked into the entrance, so I figured the view from Mesa de Anguila would be spectacular. But better than places like Guadalupe Peak or the South Rim? I’d have to see for myself.

Over the next few days, William and I, plus Far Flung’s owners, Valynda and Greg Henington, worked out a plan. William had hiked to the overlook multiple times, so he had the route down. We planned a three-day, two-night backpack in late March. 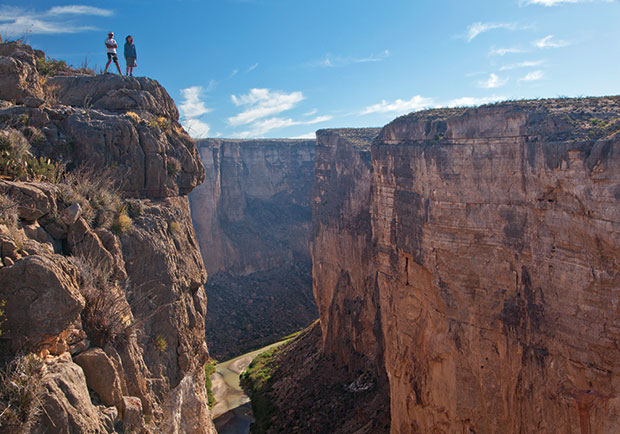 The hike would be physically challenging. The trail starts at Lajitas, near the Lajitas Golf Resort & Spa, and climbs—quite steeply in places—up onto the mesa. Reliable water doesn’t exist on the mesa, so we would have to carry all we needed. The hike would be 26 miles round trip, plus maybe two miles hiking along the rim of Santa Elena Canyon. I thought that doing 28 miles in three days would be an effort, but it sounded reasonable.

William called me a few days before the hike to tell me that they’d had to shorten the hike to two days. Twenty-eight miles in two days with a full backpack, lots of water, and camera equipment? That would definitely be an adventure. But my schedule was clear, my gear packed. I was going.

Early on March 23, William, guide Erica Little, and I threw our packs into my truck at Far Flung’s headquarters in Terlingua. Erica had quizzed me the night before about my gear and hiking ability, and as she divvied up our food that morning, I could tell she still had some doubts about whether I’d make it. I figured I’d just have to show her. Our packs weren’t light exactly, but they could have been worse: William had hiked part of the route a few days before, and he had stashed some water along the way so that we wouldn’t have to carry as much.

The three of us drove about 17 miles to Lajitas, parked in a gravel lot near employee housing at the resort, and pulled on our packs. The sun was still low in the eastern sky, so the morning was cool. We were anxious to make time while it was pleasant. The first stretch of trail was an easy cruise across desert flats to the base of the mesa, but soon the trail began to climb, and the sweating began. We plugged away for about an hour on the steep trail and took a break once we reached the top of the saddle, a relatively flat part of the mesa where many of the trails begin. We could now see far to the south, clear into Mexico.

For the next four miles, we hiked southeast along a high bench of the mesa on a lightly used, clear trail. It continued climbing, but at a much more relaxed grade. We felt energized and briskly walked toward La Mariposa, a distinctive, jagged peak that rises some 3,745 feet. William had stashed our extra water at a trail junction there, and we celebrated its presence with lunch.

Unlike a lot of hikers I’ve known, Erica had not packed trail mix and freeze-dried meals, but rather fresh fruit, vegetables, and turkey-and-cheese sandwiches. I decided I wanted to take her on future hikes.

Two side trails fork off from the main trail at La Mariposa. Both descend down to the Rio Grande, which was visible far below. We continued southeast a short distance on the main trail until we forked off onto a faint, unmarked trail that continued to the southeast. We were now officially off the map—a place where old-time mapmakers might scribble “here be dragons.” We carefully followed an old horse trail that probably dates to the park’s ranching days 70 years ago. The hiking was flat and easy now, but after three miles or so, the path faded away for good.

William pointed out Santa Elena Canyon far in the distance to the south. It didn’t look especially close, but William insisted it wasn’t bad. “Piece of cake,” he said. Erica and I looked at each other and shrugged. This was her first time for the hike, too.

“To avoid crossing a bunch of small canyons,” William advised, “we have to curve way around to the north first, and then hike back south to the main canyon where it’s joined by Fern Canyon.”

“Piece of cake,” I thought to myself.

Off we went. We did curve north, but not far enough, as it turned out. All too soon we found ourselves hiking on loose limestone cobbles with heavy packs as we crossed numerous small canyons. There was no trail in sight. Slowly, we moved closer to the walls of Santa Elena Canyon.

“Ten more minutes,” William said as he skipped along ahead of us.

Erica and I looked at each other with raised eyebrows.

Half an hour later, we arrived at the canyon rim and shed our packs. I carefully eased over to the rim. “Yikes!” I thought. The ground went from level to perfectly vertical within inches. I hung my camera around my neck and lay down with my head and arms hanging over the void. The drop was so sheer that I could have easily thrown a rock into the river a thousand feet below. Across from us were the towering walls of Mexico’s Fern Canyon, and as a canoe drifted into view from around the corner, I took some photographs. From this high up, it was hard to tell how many people were in it. 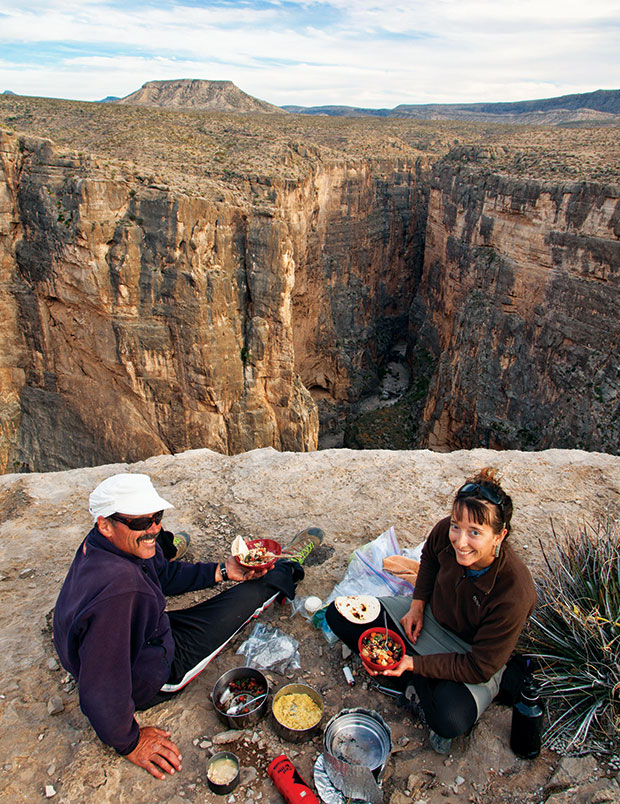 Heights don’t generally bother me that much, but this vantage inspired a few butterflies in my stomach, and I eased myself back from the rim. It was late afternoon, so we decided to pitch our tents and set up camp on a nearby knoll with million-dollar views. We cooked dinner before it got dark, enjoying grilled vegetables, chicken, and brown rice, all cooked fresh on a backpacking stove.

As we were eating, the light became optimal for photography, and before long I was begging Erica and William to stand on the rim for photos. I’d yell “move a little closer to the edge,” and they’d give me a jaundiced look in return. As the sun set to the west, far out over Mexico, I snapped photo after photo, thankful in the dimming light that I’d lugged my tripod on the trek. The sky flamed gold, orange, and scarlet as I took photos of our camp. I even lit our tents with headlamps for a few last shots as the light faded away. I put up the camera, admired the endless stars overhead, and finally crawled into my tent, grateful to be in the prone position. I drifted off to sleep with a light wind rattling the tent walls and tried not to think of the long hike back tomorrow.

We arose before dawn the next morning, with coffee and hot chocolate the stars of yet another good meal. Although it was still cool and pleasant, we hadn’t started as early as we had on day one, so we knew we were going to get warm. On the way back, though, we were determined to avoid all the little canyons we had struggled across on the hike out here. Even though the trailhead was northwest of us, we headed northeast, uphill to the north rim of the mesa, avoiding all but two or three minor canyon crossings. Then we turned northwest, staying on the divide between Bruja Canyon to the north and the numerous Santa Elena tributaries to the south. The route was longer, but easier. Reaching the first bit of the faint horse trail was a relief; it was better than all of the loose cobbles.

After seven miles, we stopped again at the water cache at La Mariposa. We ate another great lunch, drank some of the remaining cached water, and poured the rest into our water bottles. After slathering on another coat of sunscreen, we headed out again. The route was mostly downhill, something no one complained about. As we neared the saddle, the point where the trail climbs down off the mesa, William spoke up. “Another hour,” he said. Once again, Erica and I looked at each other with raised eyebrows.

“Maybe at your pace, William,” I countered.

An hour and a half later, we arrived at the truck. As we headed for Terlingua, Erica reviewed the hike. “It’s not for the fainthearted, but the views are sure great,” she said.

As William had promised, the hike and the views had been spectacular. Are they the best in Texas?

Take a look at my photos, and you be the judge.