Lights fantastic at the Houston Zoo 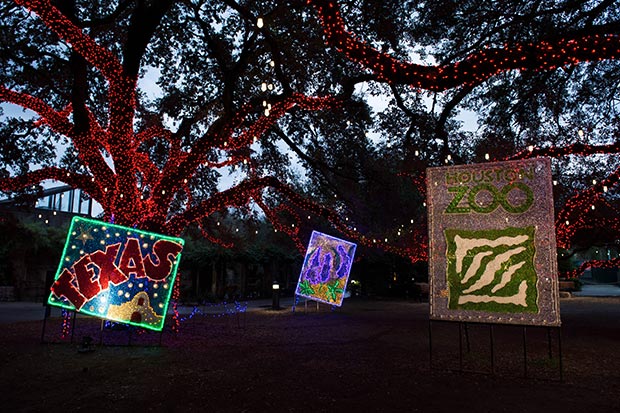 A mile-long trail at the Houston Zoo sparkles with lights and more than 20 illuminated displays.

My 15-year old was skeptical when I told her we were going to see the Zoo Lights at the Houston Zoo for New Year’s Eve. Wasn’t that for babies? Wasn’t she too old for all that now, and didn’t she have better things to do, like play games on her smartphone, watch video clips online, and text her friends? Nope, I told her. We were going. With only a few precious years of child-rearing left to go, I didn’t intend to waste a single season, and soon my powers of persuasion (or coercion) would lose their effect. Plus, I suspected that the outsized holiday spectacle would dazzle her back into childhood enchantment.

Who wouldn’t be transported by the zoo’s mile-long trail winding through a scintillating wonderland of about 2 million LED lights and more than 20 illuminated displays? This annual seasonal event kicks off mid-November and continues into January, with breaks only for Christmas Eve and Christmas Day. When the event started in 2012, it attracted 150,000 visitors, a number that had grown to 280,000 by 2015. The zoo’s website conveniently noted which evenings would be the busiest, and I had intentionally picked New Year’s Eve to avoid the worst of the crowds.

Nevertheless, by the time the doors opened at 6 p.m., the line at the main entrance had grown to surprising lengths. My daughter grumbled a bit but was happily distracted by the vendors selling light wands and glow-in-the-dark necklaces from carts stationed nearby. Our patience was rewarded once inside the gates, where we were greeted by a stunning vista of massive live oaks with trunks and branches wrapped in strings of lights in shades of red, orange, blue, and fuchsia. These majestic trees lined both sides of the zoo’s long, rectangular reflecting pool, and their particolored display flashed in time to the rhythms of “Christmas Time Is Here” from the TV special A Charlie Brown hristmas.

From there, helpful guides directed us along a designated path as we wound our way through the zoo grounds. Many of the side paths had been blocked off to allow the animals their rest, but a few creatures were still stirring. The aquarium, reptile house, and bug house were open to visitors, as was the Natural Encounters building—home to a variety of species, including the nocturnal fruit bat. One of our first stops was the flamingo habitat, fittingly decorated with painted displays of the iconic pink birds outlined in lights. Unperturbed by the onlookers, the real birds intently went about their business trawling for food in the shallow waters of their enclosure.

Rounding a corner, we encountered a full-size sleigh, the first in a series of staged photo ops beckoning us to pose for posterity. Farther down the path, a line of gypsy-style wagons presented humorous displays on how to survive the holidays, including one with glass vials of “medicines” bearing labels such as “boundaries” and “humor.” This narrow path opened onto a herd of sheep—white statues onto which hidden projectors cast spirals of light to the sound of Bing Crosby crooning “Jingle Bells.” I glanced at my daughter, who was busy snapping photos with her smartphone.

The trail continued on, and though we could not see the elephants, their unmistakable scent wafted through the night air. We passed beneath round red lanterns that hung from trees like luminous fruit, and stopped to marvel at neon-hued inflatables that vaguely resembled alien sea anemones, or something from a Dr. Seuss book. Just in front of us, a toddler paused to lick one of the lollipop-shaped lights along the trail, mistaking it for the real thing. For a moment, I felt like a pawn in a life-size version of the board game Candy Land. This impression was underscored by the vendors hawking food at regular intervals along the way—kettle corn and hot chocolate, and even s’more fixings. Families swarmed around an elevated fire pit to toast marshmallows for the gooey treat.

Around the next bend, the zoo’s carousel lit up the night, and children clambered aboard their favorite exotic animals. Though my teenager declared herself too old for the ride, she was appropriately awed by the sight of the giraffes in their barn for the night. The viewing window revealed mostly just their long legs and torsos, but it was the perfect height for spying the new calf in their midst.

As we pressed forward with the giddy crowd, my daughter began humming along, in spite of herself, to the piped-in holiday music: “I Want a Hippopotamus for Christmas.” I could tell the Zoo Lights were starting to work their magic. Next, we passed through an artificial cave decked out with a chandelier of electric icicles to reach the chimp house. Though the creatures were nowhere to be seen, their enclosure had been transformed into a disco, festooned with mirror balls that cast spinning points of light in all directions.

Farther along the path, a full-size animatronic zebra stationed in the bushes wished us a “Happy Moo Year” before we passed through a long archway made entirely of multicolored lights. A cluster of families gathered around the next display, an electric model train circling through a charming miniature village, which looked like a Thomas Kinkaid painting come to life. Others lined up to have their photo taken inside an inflatable snow globe.

Eventually, we came full circle back to the reflecting pool, with its illuminated canopy of live oaks. My daughter gravitated toward two musicians playing guitar and ukulele on the stage at the far end, mesmerized by their country-style interpretation of “Silent Night” and their tight harmonies. After a few tunes, we made our way slowly toward the exit, passing two more photo ops along the way—a black 1936 Ford pickup hauling a pine tree, and a 1958 Cadillac bedazzled with rope lights, the latter with a fully decorated Christmas tree on its roof and holiday music booming from its speakers. It was time to track down our own car somewhere amid the sea of vehicles in the parking lot.

On our way out, my daughter insisted on buying a souvenir—a pair of black knitted gloves with fingers that lit up and blinked in different configurations of colors. I was glad that she wanted something to commemorate the experience, and that I could prolong her childhood just a little bit longer. Of course, she also came away with a phone full of images and a better attitude. It was a Christmas miracle.