A World of Exploration 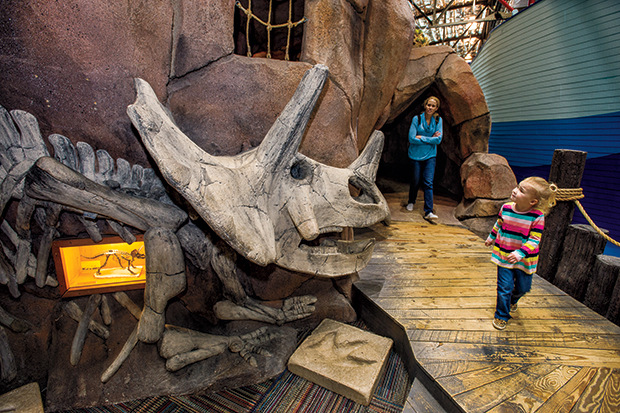 On different levels of a multistory faux cave, kids and adults can explore themes releating to geology and fossils.

Housed in a century-old building in downtown Tyler, Discovery Science Place stands out among the historic buildings surrounding it.

Many of the buildings on Broadway Avenue and surrounding streets have been carefully restored to their early-20th-century glory and are now listed in the National Register of Historic Places. In contrast to the restrained architecture surrounding it, the L-shaped former warehouse that houses Tyler’s science museum serves as a colorful billboard promoting the arts and sciences. Several exterior walls of the museum now boast a vibrant mural depicting plants, microscopes, insects, and constellations, conveying a sense of the fun that waits inside.

Exploration through touch is an integral part of the Discovery Science Place experience, and it begins as soon as you enter the fenced courtyard leading to the museum entrance, which is shaded by a green awning. Benches flank the perimeter of the courtyard, providing a spot to rest and watch the goings-on at a recreated fossil- and gem-mining area known as the KO Mine. Here, water cascades from a one-story tower into a trough filled with sand, and kids and adults take turns shaking the sand through a sieve, looking for hidden treasures. (Pro tip: Some parents purchase bags of stones or trinkets from the gift shop at the entrance, guaranteeing their kids prospector success.)

The sensory experience continues once you enter the building, which features three exhibit halls anchored by a gift shop, where you can buy admission tickets and purchase science-related gifts ranging from microscopes and telescopes to geodes and plastic snakes. Just as other science museums nationwide have embraced today’s “maker” ethos, where kids and adults are encouraged to express their creativity by adapting things, designing things, and making things, so has Discovery Science Place. Alongside the gift shop’s magnets, T-shirts, and packaged science experiments, visitors can also purchase electronic platforms known as Arduinos, which allow everyone from beginner hobbyists to advanced programmers to make all kinds of gadgets, including tiny robots and motors.

In Discovery Landing, the first exhibit space, your eyes are immediately drawn to the replica of a giant ship, two stories tall and jutting from what at first appears to be a wall of rocks. With a closer look at the rocks, the entrance to “the cave” becomes visible. As you wind your way to the top, each landing features a display dedicated to an aspect of geology. When you press the button, the ground shifts beneath you, simulating the sudden shaking and sharp jolts of an earthquake. Farther along, fluorescent lights illuminate glowing minerals and semiprecious stones.

While the cave allows you to explore land, the ship is dedicated to sciences of the sea. Tucked away from immediate view in the hull of the ship, a small theater plays videos about oceanography. After viewing the films and climbing to the second story of the ship, you can continue your oceanography exploration by using a microscope to study tiny objects and viewing sea creatures on a digital display. The second story also provides a panoramic view of the exhibits and attractions in Discovery Landing, including a kinetic sculpture next to a floor-to-ceiling window overlooking Broadway Avenue, its brightly colored pieces revolving in graceful, undulating patterns. From up high, you can watch kids unearth “fossils” in the Dino Dig Pit and carefully scale the climbing wall on the exhibit hall’s far end while adults and teenagers take in the nearby robotics exhibit, practicing their manual dexterity as they move plastic balls back and forth using a joystick. You can also can see the outline of the Cinesphere, a small, circular theater with 15-minute movies on topics like space or dinosaurs.

Exploring the world beyond could easily be the theme of Discovery Science Place, particularly in Orion Hall, which offers a compelling look at space travel thanks to a collaboration with NASA. 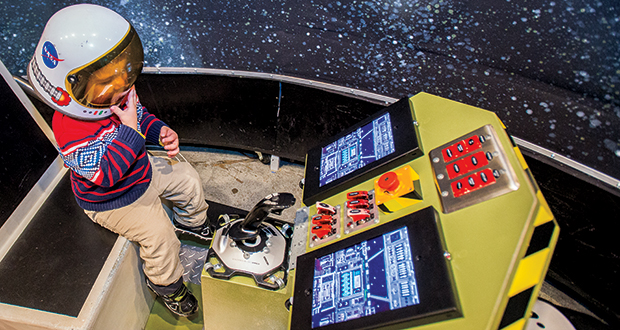 On the day I visit, I enjoy watching a family of four fan out from the exhibit’s entrance, each drawn to a different element of the display. An older child studies the full-size mock-up of the Orion spacecraft, whose real-life counterpart may someday take astronauts to Mars. Two mannequins sit in the astronauts’ seats, facing the brightly lit control panels. Nearby, another child concentrates heavily as she mans the controls of the Mars rover exhibit while her parents examine gyro binoculars and other artifacts from completed missions. Orion Hall presents information about what has already been discovered in space, while leaving room for guests to ponder the age-old question: What else might be out there?

“Watching families here is the best part,” museum board member Josh Ebright says. “There are so many opportunities for adults to do things with the kids they bring, and everyone is having a blast.”

Space technology may take center stage in Orion Hall, but imagination plays the leading role in Hometown USA, the museum’s third hall of exhibits. In a section cordoned off with white picket fencing, the Imagination Playground offers kids an opportunity to stack giant blue foam blocks to build expansive forts, mazes, and hideouts. Some create intricate games around what they’ve built. And for most kids, sending the towers crashing to the ground and beginning again is as fun as constructing them in the first place.

Hometown USA also features miniature versions of a hospital, bank, grocery store, post office, veterinary office, and other destinations, including a kid-size version of the Smith County Courthouse. At the grocery store replica, children squeal with delight while pushing grocery baskets brimming with plastic fruit and canned goods from one exhibit to the next. They share plates of faux food from the bistro before heading to the veterinarian section. They don kid-size lab coats and stethoscopes in the hospital, then recruit caregivers from nearby benches as customers and patients.

For children and adults alike, Discovery Science Place offers a delightful hodgepodge of playing, learning, and role-playing. For those who visit with a spirit of adventure, the museum offers an intriguing mix of what we know and what we hope to discover.