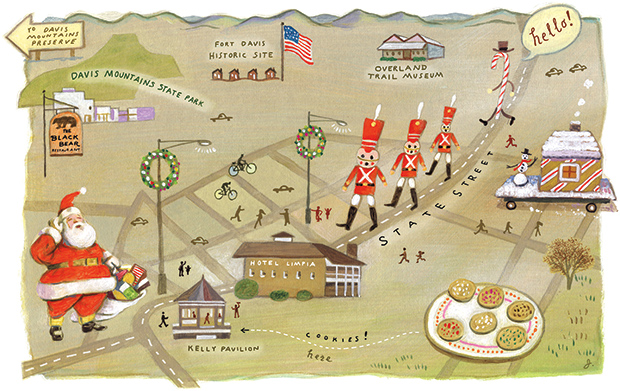 During the holiday season, the fresh air and cheerful sunlit peaks of Fort Davis become all the more festive thanks to the town’s Frontier Christmas Festival. This mile-high community in the foothills of the Davis Mountains commemorates its Old West history, scenic mountain setting, and the delicious tradition of homemade cookies with the annual holiday celebration, scheduled for Saturday, December 10, this year.

Fort Davis Frontier Christmas Festival is Saturday, Dec. 10, with events at various locations around town and a lighted parade on State Street at 6 p.m. For festival information, visit the Fort Davis Chamber of Commerce Facebook page or call 800/524-3015.

Developed around a frontier military garrison in the mid-1800s, Fort Davis grew into a prominent West Texas outpost because of its location at the crossroads of two major trails. Today, Trans-Pecos residents and visitors alike converge on the town during the Frontier Christmas Festival for activities like the Holiday Lighting Contest, a cookie-baking championship, special hiking opportunities, the Overland Trail Museum’s Holiday Open House, and the Frontier Christmas Parade.

Start your Frontier Christmas early and share breakfast with Santa Claus at Davis Mountains State Park’s Black Bear Restaurant. The Black Bear is located at the park’s Indian Lodge, a multi-storied hotel designed to resemble a pueblo village and built in the 1930s by the Civilian Conservation Corps. The lodge “decks the halls” for the holidays, adding tinsel, baubles, and wreaths to the handmade adobe walls, rock fireplaces, and hand-carved furnishings. The festive decor comple-ments the handsome views of the surrounding pine forest and mountain landscape, where during the festival hikers can indulge in cookies at different stations around the park. Meet and greet Santa at the Black Bear and then join the kids for a special Christmas-cookie decorating workshop in the restaurant.

Fort Davis wasn’t always as family-friendly as it is today. In fact, had you attempted a real “frontier” Christmas in the 19th Century, you probably would have experienced more “naughty” than “nice.” In 1854, the U.S. military established the garrison that preceded the town, part of a line of defense along the far West Texas frontier, on the site of a Native American village known to early Texans as Painted Comanche Camp. The appropriation of the site created plenty of animosity among the surrounding tribes, and by 1867 the garrison had been looted by Apaches and abandoned.

The town of Fort Davis, a rowdy settlement originally called Chihuahua, evolved just southwest of the military operation and survived long enough for the 9th U.S. Cavalry to arrive in 1867 and reoccupy the fort. The military presence brought a limited calm throughout the region, although fights and heavy drinking (courtesy of the soldier population) made for a rambunctious blend of part-timers and permanent locals. Fort Davis National Historic Site, modestly decorated for the holiday season, preserves the old fort, considered one of the Southwest’s best surviving examples of an Indian Wars-era military post.

Despite its frontier turbulence, Fort Davis was among the most important communities in the Trans-Pecos. The Overland Trail Museum, which explores the town’s history, welcomes visitors during the Frontier Christmas Festival with warm punch, cookies, and Christmas ornaments and decorations, such as vintage handmade dolls dressed for the holiday season. Fort Davis is located along the Southern Overland Trail, the route used by the Butterfield Overland Mail Company (and later Wells Fargo) to transport mail and passengers across the country in the 1860s. Also part of the San Antonio-El Paso Road, the trail was eventually made obsolete with the 1883 arrival of the railroad in nearby Marfa. Inside the museum, antique medical supplies, kitchen utensils, a hair-curling machine, an original telephone switchboard, and dozens of early photographs reveal the stark realities of life on the Fort Davis frontier.

If you want to experience a sense of the early frontier days in Fort Davis, albeit in comfort, be sure to reserve a room at the Hotel Limpia, one of multiple lodgings in town. The Victorian, pink-stone hotel was built in 1912 as a summer retreat for Texas cattlemen. The rooms reflect the era, with high ceilings and vintage furnishings, and the communal sitting room next to the lobby features antique overstuffed armchairs and a fireplace. During the holidays, garlands and gold ribbons grace the Limpia throughout. Generous wrap-around porches offer both enclosed and open-air locations to read a book, play a board game, write a last-minute letter to Santa, or do nothing more than relax and rock in one of the hotel’s wooden rockers.

Hotel Limpia also offers a chance to catch up on Christmas shopping at its Javelinas & Hollyhocks store, which carries gifts like jams, jellies, books, and decorative oddities from Texas and around the world. Shopping is a key part of the Frontier Christmas Festival as multiple shops around town display their Texas mountain crafts; the Chamber of Commerce provides maps to the various retailers. Earn some extra points with Santa by shopping at Fort Davis’ Grand Companions Thrift Store, a fundraising venture of the Grand Companions Humane Society, the town’s no-kill animal shelter.

If you’re looking to gather the extended family or a big group for a holiday getaway, consider the 1898 Webster House. Located within walking distance of downtown, the Webster House, with four bedrooms and two bathrooms, combines a frontier Texas experience with updated modern conveniences like high-speed wireless internet, a full-size kitchen, and satellite television. The house includes classic turn-of-the-century highlights like tall ceilings, transoms, original wood floors, a fireplace, and period furnishings including cushy, four-poster beds.

Frontier Christmas specializes in cookies (they are available just about everywhere you go in town) and hon-ors the homemade holiday fare with a cookie-baking contest. Judging takes place at the Kelly Outdoor Pavilion
behind the Fort Davis Chamber of Commerce office. Local judges are on hand to nibble and take notes. Winners get a trophy featuring a cheerful gold-colored Santa.

Along State Street, Fort Davis’ main avenue, cowboys gather on horseback alongside parade floats, decorated by hand and strung with lights, for the annual Frontier Christmas parade at about 6 p.m. Local school clubs,
civic organizations, and the volunteer fire department embellish trucks and flatbed trailers with Christmas cheer. After the parade, Santa arrives for photos and to take gift requests at the Jeff Davis County Library, located in a charming turn-of-the century mercantile building.

Perhaps the best way to experience frontier life would be to unplug completely and take a hike through the Davis Mountains. As part of the Frontier Christmas Festival, The Nature Conservancy will open its Davis Mountains Preserve to the public for the entire weekend (December 9-11) for hiking and camping. Located 25 miles northwest of town, the preserve’s McIvor Conservation Center is decorated for the holidays and even hosts a visit from Santa. (High clearance vehicles are required for visitors driving beyond the center.)

A “sky island” with rare plants and animals, the preserve helps protect the last surviving population of ponderosa pine trees in Texas as well as stands of quaking aspen and madrone trees. Here you can explore some of
the highest elevations in the Davis Mountains, including Baldy Peak, a massive rock knob crowning Mount Livermore with unparalleled views of the surrounding mountain range. Be prepared. It could take most of the day to get there and back, but who knows, once on top you might catch a glimpse of Santa on his way!