Written by: Eric Moreno
Photos by: Will van Overbeek

Written by Art Williams, Photographs by Will van Overbeek | From the November 2017 issue | Updated: October 15, 2017 | Filed Under: Family Travel 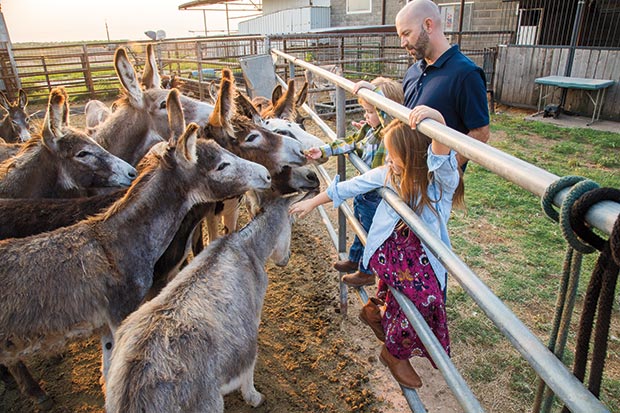 Visitors can stop by for a free tour any day of the week and spend time petting and feeding the rescue ranch’s donkeys.

Mark and Amy Meyers, the founders of Peaceful Valley Donkey Rescue near San Angelo, have made it their mission to change perceptions about donkeys one person at a time.

“People have this misconception about donkeys, that they’re stupid, dumb, stubborn,” said Mark Meyers, dubbed “The Burro Man” by fellow animal conservationists. “We started this place to rescue donkeys, and there will always be a need for that. But, I also want to change people’s perceptions of these animals.”

The Meyerses and their team have a passion for these oft-misunderstood animals, which they see as loyal, intelligent, and beautiful.

“In a lot of cultures, donkeys are revered,” he said. “In England, donkeys are respectable. In America, the home of the cowboy, only the sidekick rode a donkey. I want to change everyone’s opinion of donkeys. That’s my real calling.”

“In England, donkeys are respectable. In America, only the sidekick rode a donkey.”

Some people collect baseball cards; others collect stamps and coins. The Meyerses started their rescue ranch by collecting donkeys. They were running a ranch in California when Amy noticed a donkey, Izzy, at a local feed store.

After a while, Mark noticed a change in Izzy. It wasn’t long before the Meyerses began to add to their fledgling menagerie. One donkey turned to 10; 10 turned to 25.

“To me, it’s kind of like owning a new truck,” Mark explained. “I bought a new truck recently, and now I see this truck everywhere. It was the same with donkeys. We got the first one, and we started seeing donkeys all over the place.”

Soon, the hobby turned into a calling.

“We started bringing in all of these donkeys, and I didn’t have any clue about how to treat them or take care of them,” Mark said. “It started with Izzy, and it seemed to work with him. What I did was just go out and talk with him every chance I got. I would pet him and scratch him and really just show him some love.”

After seeing how well the donkeys responded to this type of attention, Mark realized the need for a full-fledged rescue facility, and Peaceful Valley was born.

The largest animal rescue facility of its kind in the United States, Peaceful Valley started out on a property in north Los Angeles County in 2000. After a few relocations, the Meyerses settled on a 172-acre former dairy ranch outside of San Angelo, where they take care of more than 1,000 donkeys at any given time.

“Our goal with each of these animals is to hopefully find them a permanent home,” Mark said. “Ideally, we would find a family or someone who wants to adopt them as pets.”

The couple travels all across the lower 48 states, to Hawaii, and the Caribbean and works with law enforcement and the federal government on rescuing donkeys, many of which have experienced abuse or neglect.

During my visit to the ranch, Mark and I strolled dirt tractor paths lined by donkey pens. The friendly animals stood eagerly at the front of their enclosures, seemingly hoping for a pat on the head, a scratch behind the ears, or a carrot to munch on.

“If you give donkeys the respect and yes, the love, that they really want, they will be the most loyal animals in the world to you,” Mark said.

The highlight of my tour was the pen with the young donkeys. They playfully nibbled at my hands and legs, looking for attention. Mark warned, “If you’re not careful, they will kiss you full on the mouth.”

Peaceful Valley is open for free tours all year long. Individuals or groups of visitors can walk the ranch with multiple opportunities to interact with the donkeys, including petting, feeding, or cleaning up after them.

“We have groups come through here to visit all of the time,” Mark said. “People who come here are allowed to do as much as they’re comfortable with. What we really like to do is have people come in here and interact with the donkeys. I guarantee you after a visit, you will see what I see.