Pop Out and About 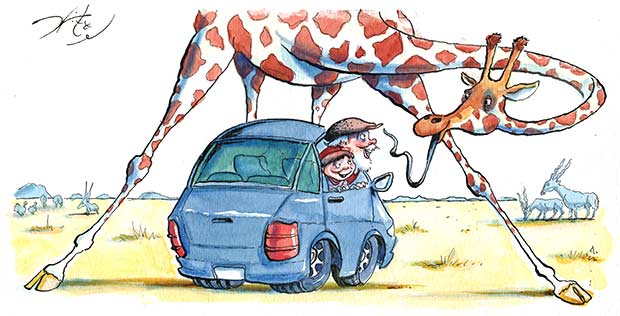 After he turned 80, it was difficult to get my Pop to leave the house. I found it hard to accept this sea change in the man who had been my travel mentor. But Pop’s joie de vivre had been stolen by dementia. I longed to awaken his spirit of discovery, and allow my young son to see his grandfather as the man I remembered.

Pop resisted the invitation, but on this bright, crisp winter’s day I insisted. I was surprised to discover him ready to go, dressed in his favorite cranberry-red cardigan and—always—a touring cap. We hit the road. Halfway to Glen Rose, there came the expected question: “Where are we going, again?” I told him, but knew that by the time we arrived the answer would be forgotten.

He broke into a smile I hadn’t seen in years.

It really didn’t matter, because as soon as he saw the rhino in a paddock near the visitor’s center, his mouth fell open. Then, he broke into a smile I hadn’t seen in years. I bought a sack of animal fodder, and we began a slow crawl along the serpentine, 9.5-mile road. Addax, oryx, and blackbuck antelope gamboled and trotted right up to the car. My father opened his window immediately. “Oh my, oh my!” he said, excitedly, shaking some feed into his hand. “Elliott! Elliott!” he exclaimed, inviting his grandson to clamber into the front seat and share the experience.

Three hours into our ramble, we hit a traffic jam. The other cars traversing the park this day had all halted outside the giraffe compound, but the leggy animals were disinterested in stepping out. Everyone waited in high hopes they might amble over, then one by one, the spectators moved on.

The three of us were alone when a single giraffe headed straight for my father’s window. We held our breath as it bent down and licked my father’s cap right off his head. I had heard my father giggle before, but never did a bubble of laughter give greater loft to my spirit. Elliott was rolling with laughter, too.

That night, Pop called me—a rare event—to ask the name of the place we had visited. I could feel his glow through the phone. “That was something,” he said. “Thank you for making me go.”