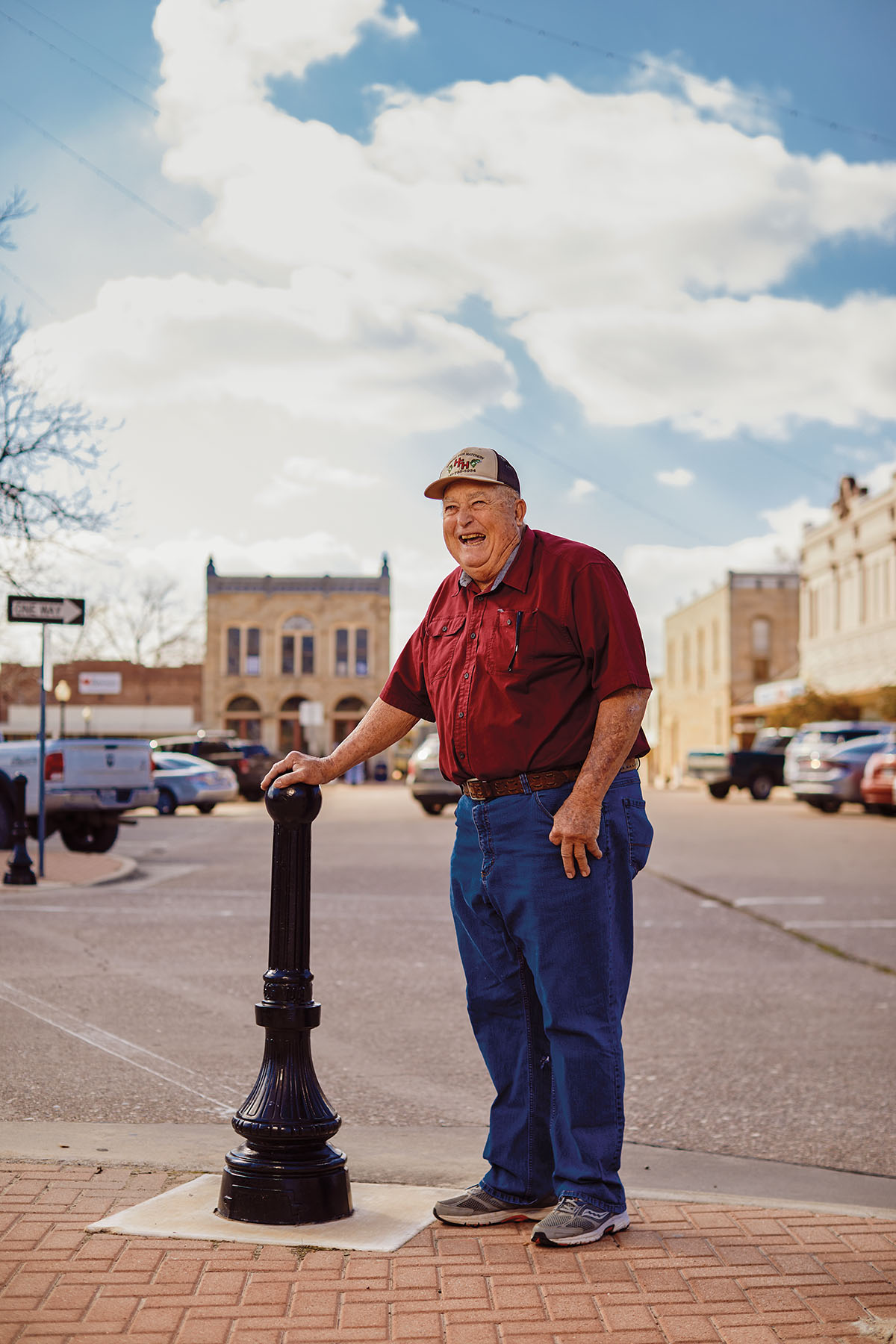 Ken Henneke’s parents were born in Lavaca County, but like many area families, his grandparents migrated from Germany.

Kenneth Henneke is the kind of guy who greets visitors to the Hallettsville Knights of Columbus Hall with a slice of apple strudel and a twinkle in his eye. The KC Hall is a home away from home for Henneke, who’s been part of the Catholic fraternal service organization for 60 of his 80 years. Raised in a German farming family, Henneke is the proprietor of Henneke Fish Hatchery, a family business that supplies catfish, bass, and perch. The hatchery grew out of his love for fishing and “underbanking,” or using bare hands to pull catfish from their river burrows. When he’s not handling fish or playing dominoes, Henneke helps organize KC Hall events like the Texas State Championship Domino Tournament and the Texas State Championship Fiddlers Frolics, which he co-founded in 1971 as a fundraiser to build the hall. The events are economic drivers for Hallettsville, the Lavaca County seat and a hub for the cattle and petroleum industries. “The KC Hall really is a community hall,” he says. “If we didn’t have the community working with us, we’d have nothing.”

“My parents farmed and ranched, like the population around here. We were raised in an old wood-frame house, no screens on the doors or windows. Sometimes with the kerosene lights at night, we had more bugs inside of the house than outside. There was no insulation, no electricity, no gas, no running water. Even when I was born in 1939, we hunted rabbits, squirrels, and birds to eat. And we fished to help feed the family.”

“In 1913, Hallettsville had 13 churches, 13 newspapers, and 13 beer joints. That’s for a fact. Don’t ask me how 13 newspapers can survive. It was all kind of languages of newspapers—Czech, Bohemian, German … .”

“Most people raised chickens, and on Saturdays they would go to town and sell the eggs, and that would pay for their groceries and a big block of ice. Daddy took me to town several times riding an iron-wheel wagon with a bale of cotton. At the gin, they would separate the lint from the seed. You would take the seed back home to help feed the cows and horses.”

“The Second World War was really what changed everything. People had vehicles to go to town on Saturdays, and the guys would go play dominoes and drink beer, and the women would go do the shopping and visit. Us kids, we got to go to the movies. The Cole Theatre wasn’t nearly as good back then as it is now.”

“In 1971, we started the Fiddlers Frolics at an old dance hall. We had so many people they had a car wreck out on the highway. The thing just kept getting bigger until we had enough money to buy the first 10 acres for the KC Hall. We get about 60 fiddlers now, and there’s a lot that come just to listen and learn. Probably 15,000 to 20,000 people come.”

“We want to keep Lavaca County, Lavaca County. It’s a relaxed place. You know everybody, you know the law; they know you, they know your family. You will find hardworking people that are very religious. If somebody’s boy or girl is doing a little something they shouldn’t be, you help keep ’em straight. We still discipline our kids. We’re conservative. You know, some weddings, 1,200 or 1,300 people show up. People care about each other. I don’t know how else to say it.”

“The City of Hospitality”

“Our events are family entertainment at its best, and they bring outside money into the community. We’ve also got the colorful churches all around. Or you can go visit people—most people will stop and talk and maybe welcome you into the house for a cup of coffee or a glass of tea or a strudel. This is Hallettsville.”