From Padres to Presidents

Written by: Mike Patterson
Photos by: Will van Overbeek 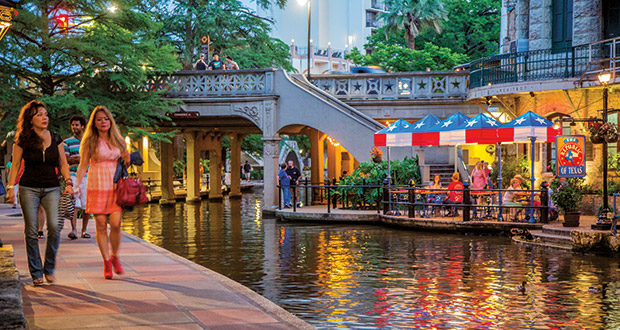 The Commerce Street Bridge—one of the state’s oldest bridge sites—stands at a confluence of time and place in downtown San Antonio. The historic span has supported a parade of historical events and personalities for more than two-and-a-half centuries.

The Commerce Street Bridge is at E. Commerce’s crossing of the San Antonio River, between Losoya and Presa streets. A Texas Historical Commission marker on the bridge alerts passersby to the crossing’s historical significance.

The bridge is located on the “great bend” of the San Antonio River, at the original ford between San Antonio de Bexar (the village) on the west side and the Mission San Antonio de Valero (the Alamo) on the east. Texas soldiers, fighting for independence from Mexico, fled across a rickety footbridge here in their retreat to the Alamo. In later years, an array of historical figures crossed the span during their travels, from Robert E. Lee to Teddy Roosevelt, Dwight Eisenhower, and Charles Lindbergh.

These days, barges, taxi boats, and river parades glide beneath the Commerce Street Bridge, which crosses an idyllic section of the River Walk near many of San Antonio’s most iconic attractions, such as the Alamo and the Tower of the Americas. Mostly unaware of its historical significance, tourists nevertheless stop on the bridge—a short, concrete, four-lane span with wide sidewalks and concrete lattice railings—as they spot ideal opportunities for snapshots framed by the backdrop of the bustling River Walk cityscape.

The first bridge on what eventually would be called Commerce Street consisted of six wooden beams laid over the ford in 1736. Spanish padres put them in place for villagers and soldiers to cross to attend church services at the mission, according to a City of San Antonio online exhibit, Historic Bridges of San Antonio. The bridge also brought trouble. To protect Native American women from harassment by the Spanish soldiers, the padres dismantled the bridge. When the Spanish military governor replaced it, the padres posted guards to keep the soldiers off.

A footbridge later replaced the beams. Across this bridge Texas soldiers retreated to the Alamo as Santa Anna’s army entered San Antonio on February 23, 1836, recounts Tom Woodley in his book, Wild West Frontier Town: A Walking Guide to Historic Downtown San Antonio. In the wake of the Texans’ withdrawal to the Alamo, Santa Anna raised the red flag of no quarter from the tower at San Fernando Cathedral.

Later that same day, Colonel William B. Travis dispatched Captain Albert Martin back to the footbridge to discuss the standoff with Colonel Juan N. Almonte, Santa Anna’s aide. Almonte told Martin that the Texans should lay down their arms and surrender. When Martin delivered this message to Travis, the Alamo commander answered with a cannon blast. Early on the morning of March 6, Mexican infantry quietly filed across the bridge to encircle the Alamo for the final assault.

About five years later, during the days of the Texas Republic, workers constructed a span sturdy enough to support horses and wagons. But the wooden structure was forever in disrepair. In 1856, an unlucky nine-year-old boy even fell to his death when a rotten plank gave way. 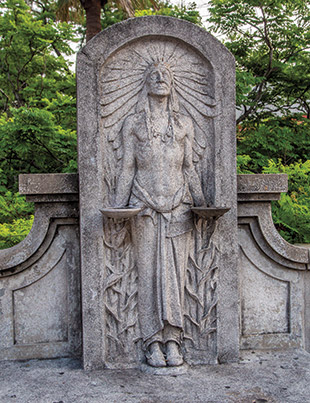 So many have written about this landmark that it’s called San Antonio’s “literary bridge.” An iron truss installed in 1880 served as a backdrop in William Sydney Porter’s 1912 short story A Fog in Santone. Porter, better known as O. Henry, placed a tuberculosis patient on the bridge, peering at the “small tortuous river” flowing beneath it. When city workers removed O. Henry’s “little iron bridge” in 1914 to widen Commerce Street, they hauled the old span downriver to the King William District, where it’s still in service as a pedestrian crossing.

Today’s bridge replaced the iron truss. As the T-beam concrete span was erected, the San Antonio Express paid $1,000 to commission sculptor Waldine Tauch to cast The First Inhabitant, a seven-foot concrete Native American in a full headdress, located on the south railing.

The view from the Commerce Street Bridge today is a panorama of modern and historical sights, including the iconic River Walk. The 15-mile linear park runs beneath the bridge and through downtown, where it’s lined by restaurants, hotels, and bars, and then extends to the farthest reaches of the city’s five 18th-Century missions. River Walk pedestrians squeeze along crowded walkways beside giant cypress trees, through a maze of riverside dining tables, queues for river barges, and crowds that congregate for frequent special events, such as the International Accordion Festival in September.

San Antonio-born architect Robert H.H. Hugman developed the concept for the River Walk in 1929. He conceived of developing a downtown bend of the river into a park-like setting of shops and restaurants—a fanciful hybrid of Spain and Venice. His vision came to fruition when the city dedicated the River Walk in 1941 with the first Fiesta river parade.

Hugman opened his architectural office on the river level of the Clifford Building, the turreted, limestone building at the Commerce bridge’s northwest corner (now home to Royalty Coins and the Republic of Texas Restaurant). Hugman also designed the bridge’s twin staircases leading from the street down to the River Walk.

Brightly visible from the Commerce Street Bridge, the green, yellow, orange, red, and blue umbrellas along the River Walk draw visitors to Casa Rio, the River Walk’s oldest restaurant. Opened in 1946, the restaurant is located at the southwest abutment of the bridge and offers Tex-Mex standards like enchiladas, tamales, and chili con carne. Diners can sit outside beneath the colorful umbrellas on the River Walk or indoors, where the hacienda-style décor calls to mind San Antonio’s early days.

On a bluff overlooking a bend in the river is La Villita Historic Arts Village, a five-minute River Walk stroll from the Commerce Street Bridge. The “little village,” a National Historic District, once housed Spanish soldiers and their families, and in the latter half of the 19th Century, was a robust center for German residents called the “Little Rhein,” a name adopted by a present-day steakhouse. Nowadays, the square block that makes up La Villita is dotted with quaint limestone, brick, and adobe buildings housing some 25 art galleries, import shops, and boutiques.

At street level, just southeast of the Commerce bridge, Mexican sculptor Sebastián’s reddish-orange ribbon of steel, La Antorcha de la Amistad, rises on a roundabout median at the intersection of Commerce and Losoya streets. A block away, HemisFair Park is home to the Henry B. Gonzalez Convention Center, the soaring 750-foot Tower of the Americas, and the Institute of Texan Cultures, a museum that showcases the peoples and cultures of Texas.

Four blocks west of the bridge on Commerce Street—the ancient route between the town and the Alamo—San Fernando Cathedral stands on Main Plaza, the location where 56 Canary Islanders settled in 1731 to establish what would become San Antonio. In 1738, they laid the cornerstone for the church, which was eventually completed in 1755. Its twin gothic towers now serve as the façade for San Antonio, The Saga, a 7,000-square-foot video art installation designed by French artist Xavier de Richemont that chronicles the discovery, settlement, and development of San Antonio. Crowds gather on the plaza on Tuesday, Friday, Saturday, and Sunday nights, when the installation is presented free of charge.

Although unassuming, the Commerce Street Bridge spans San Antonio’s contemporary bustle and colorful history, a symbolic reminder for anyone willing to stop for a moment and ponder the millions of footsteps that have come before them. As Georgia poet Sidney Lanier wrote: “One may take one’s stand on the Commerce Street Bridge and involve oneself in the life that goes by this way and that.” These sentiments are as true today as when Lanier penned them in the 1870s.