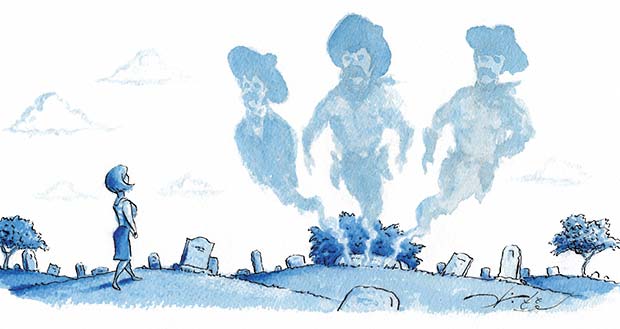 I am not sure when I first fell in love with rambling through historic cemeteries. I know it was one of my mother’s favorite diversions on any road trip or vacation. Sighting even the tiniest plot, she’d insist Dad pull over—sometimes more quickly than he’d have liked. Following mom’s lead, we’d pile out to discover whatever glimpse into the past the tottering headstones allowed.

While my father and brothers never quite shared the enthusiasm Mom and I had, eventually the outings became an almost competitive search for the oldest dates and most mysterious carvings. Interpretations of cryptic epitaphs continued for days. Even as a child, I soon understood that any cemetery was a direct connection to the history of a place, and inspiration for all sorts of poetic musing.

Fourteen miles southwest of Abilene, Buffalo Gap’s cemetery makes a great case for the historical connection. The buffalo are gone, the 20-foot stacks of hides that had travelling pioneers exclaiming in their diaries long since crumbled into history. But the Gap is still there, a red-dirt and oak-shaded valley squeezed between shrugging, square-shouldered mountains.

I arrived one rainy afternoon when the red dirt was churning into tomato soup. As mom taught me, I began my tour just outside of town, at the oldest public cemetery in Taylor County.

I sat a minute in the Perini Chapel, modeled in native stone after the Washington Cathedral, then began visiting the timeworn monuments to Civil War vets and children lost in another century. More recent losses were mourned by a caravan of toy trucks parked on one tiny plot and another nearby mound encrusted with seashells. Elaborately carved marble sculptures of lambs, doves, vines abound. Wending through them, I found the sort of gift for which I am always grateful, the historical melody of a wondrously lacy name carved into stone: Mittie Cylvesta.

A cemetery can be a place to chase your muse, to trace local history or the intermarriage of family names. But in the quiet of that day my thoughts rose to the mesas around me and the Comanche who swept down to hunt the herds of buffalo that thundered through the pass. Before Anglos came to this part of the country (one of the last areas settled in the United States), the vast groves of live oak trees provided welcome relief from the elements. During the l870s hunters settled in lean-to’s and dugouts to await the passing herds. Later, Charles Loving and Oliver Goodnight drove their herds from South Texas to Dodge City through the Gap. At times the dust trail of three different herds could be seen from the nearby flat tops of the Callahan Divide.

Lives like those—some lived more fully than others—are celebrated in a cemetery. And in Buffalo Gap, the earliest graves are touched by the dust of those trail drives and brushed with campfire smoke.

History drapes graves outside Graham, about two hours away from Buffalo Gap, too. But I traveled there in search of two specific graves. I rented a house on the Hockaday Ranch just outside town. One hundred and fifty years ago the 1,000-acre ranch was part of the Brazos Indian Reservation, and even now it’s easy to imagine little about the juniper-oak woodlands has changed. To slouch high above a double bend of the Brazos in a lonely cliff-hanging metal chair is to gain privilege to a solitary musing that is hard won these days. In addition to sloth, guests are encouraged to bump around the acreage, bird watch, and fish for bass and perch in a 50-year-old tank.

Over the course of a lazy weekend I left the ranch twice in a fruitless search for the graves of the Marlow brothers—recast as the sons of Katie Elder in the John Wayne classic. Whether the Marlows were truly outlaws or merely ne’er-do-wells remains a local topic of hot debate. It was a question I sought to ponder above the earthly remains of two of them. Frustrated, I decided to ask ranch owner Kent Pettus, a historian by hobby and disposition, for direction. Pettus knew where to find the brothers, as it turned out that three of the bad boys had landed in the Finis Cemetery established by his great grandfather.

The original Marlow marker, hidden beneath a laurel and washed almost smooth by time, was not nearly as poignant as I’d imagined. But nearby I found a Bible verse captured on a nearby pre-Civil War marker that has stayed with me. I pushed back limbs to read the epitaph on a marker that had long since toppled over: She hath done what she could.

Many years and cemeteries later, I think now and again on that spare sentiment. There are life lessons in those fields of stone.