The Great State Fair of Texas

Written by Tandem Web Co, Photographs by Will van Overbeek | From the October 2019 issue | Updated: October 10, 2019 | Filed Under: TRAVEL 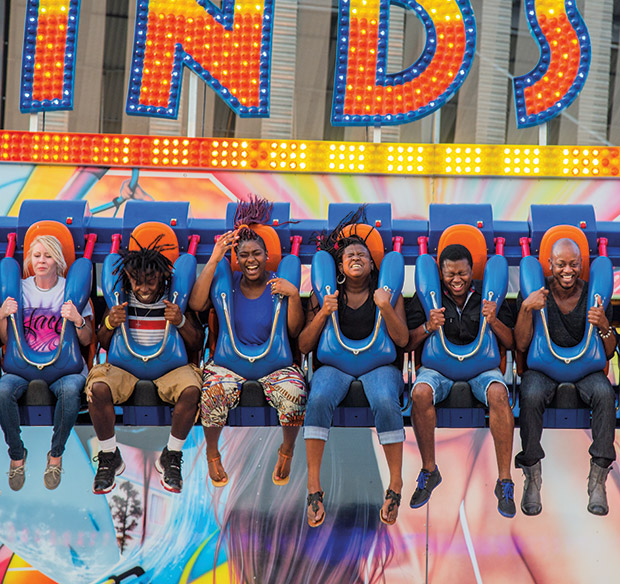 Visitors to the State Fair of Texas’ website in early September immediately notice the ticker on its home page counting down the days, hours, minutes, and seconds until the next opening day. But it’s not just a time-keeping feature, it’s also a handy device to separate Texans into two distinct groups—those of us who are Fair People, and those who are not.

Fair People see those numbers getting smaller and feel a rush of anticipation. We acknowledge that there are plenty of non-Fair People, folks who don’t have the requisite patience to battle the crowds and the noise that go hand-in-hand with being one of nearly 3 million annual fairgoers. And while the price of admission is reasonable ($16.50 online for adults this year), to do this thing right means shelling out a nice chunk of change for ride tickets and game cards and, of course, a steady supply of fried food and lemonade or beer.

But Fair People view the experience as an investment of money, tolerance, and energy that pays off each and every time. We embrace the unknowns, accept the minor irritants, and simply decide that this State Fair will be the best one yet—just like we did last year and will do again next year.

We have braved stormy mornings, keeping the faith that the clouds will clear after lunch. We have intentionally planned our annual day at the fair to coincide with the Red River Showdown football game between the University of Texas and the University of Oklahoma, energized as the roar of the crowd from the burnt-orange half of the Cotton Bowl alternates with that of the crimson-and-cream side. We have reveled in deep-fried butter, deep-fried sweet tea, and deep-fried brisket.

We love that the more things change, the more they stay the same. Each opening day brings new things to experience—the Big Tex Choice Awards for the vendors who create the year’s finest fried creations, of course, along with new exhibits and rides on the Midway. Enjoy the beauty of birds from around the world at “World of Birds Show presents: SOAR!,” which returns for the first time since 2013. Celebrate culture and creativity with the marionettes of “¡Fiestas de Marionetas!.” View the photography of Dallas-area photographer Kevin Brown in his showcase “Fair Focus: The Photography of Kevin Brown.” And learn about the history of Texas film performers and creators at “Texas Cinema.” New attractions and events join old classics like the sprawling Texas Auto Show, the Home on the Range Barnyard, the 212-foot Texas Star Ferris wheel, and the All-Star Stunt Dog Show. 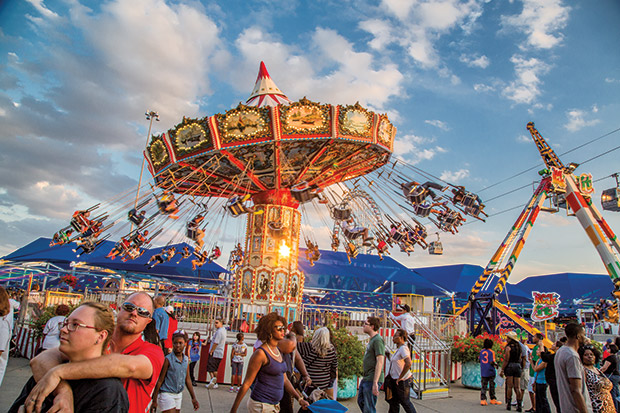 Those with potential will join the livestock shows, pig races, acrobats, live music, and parades as the stuff of which long-timers’ memories are made. Many of these memories are born of the Texas School Ticket Program, which this year will provide free admission tickets to an estimated 1.8 million Dallas-area students. For more than six decades, schoolchildren within 100 miles of fair Park have descended on the fair, in ecstasy to have received a sanctioned day off from class and to be spending it in this crush of humanity.

One shared memory that all fair aficionados—all Texans, really—would rather forget is the 2012 immolation of Big Tex. Even now, with the bigger, mightier Tex reigning again over Fair Park, seeing footage of the proud big man burning still prompts a visceral reaction and probably always will. But the beauty of the State Fair of Texas has always been its ability to evolve while remaining firmly rooted in tradition, to tweak what isn’t working or has run its course without dismissing the importance of remaining familiar to generations of visitors. 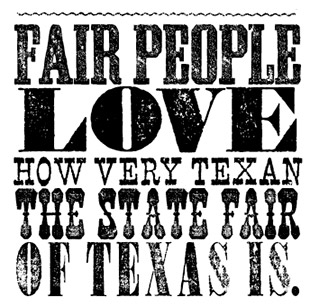 Fair People love how very Texan the State Fair of Texas is. By virtue of its sheer size alone, the fair epitomizes Texas swagger. Of course it is the biggest event of its kind in the world in total attendance, duration, and revenue, boosting the local economy by more than $600 million each year. We love the logical layout that allows visitors to come in whichever of the dozen gates is most convenient and, by making one full rotation around the Cotton Bowl, not miss a single thing. Left to their own devices, kids and teenagers generally have a shorter preferred route, sticking to the rides and games of the Midway and eschewing the remaining three-quarters of the grounds. Join the family in admiring the prize-winning quilts or the exhibits in the Butterfly House? No, thank you.

But like the fair itself, Fair People evolve. As adults we appreciate a more nuanced experience, content to sit for a while and people-watch or indulge the whims of others in our party whose own favorites aren’t on our must-do lists. Rather than be dazzled by the bustle and lights of the Midway, we take note of the buildings themselves—the grand Hall of State, Texanic-style Centennial Building, and even the corrugated metal-roofed livestock barns. Some of us eventually forgo the greasiest concessions or the rides, offering instead to watch everybody’s stuff. But stay home altogether? Never! They can take our Fletcher’s corny dogs when they pry the sticks from our cold, dead hands.

For now, we’re counting down in shared anticipation, waiting to hear the sweetest words of the year. “Howdy, folks! Welcome to the State Fair of Texas.”