Take an easy amble through the Frio Canyon

Written by: Paula Disbrowe
Photos by: Will van Overbeek 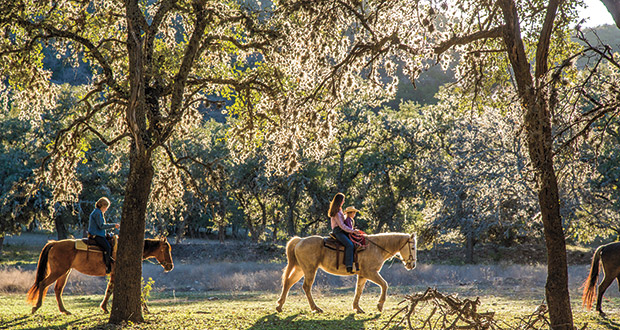 The scene is wistfully familiar. As I pull off US 83 and into the stables at Elm Creek Ranch near Concan, there are a dozen or so horses saddled and tethered to the open-air barn where round bales of hay are stacked to the ceiling. A mess of chickens scratch around the yard, an old dog snoozes in the shade, and a frisky chestnut foal prances around the ring. Clayton Kessler, a strapping 27-year-old roper, is attempting to shoe an impatient cream-colored horse. His grandfather, George Streib, a veteran rancher who originated the trail rides and other offerings here, sits at a nearby picnic table, offering unsolicited advice. The horse paws at the dirt, irritated. George looks at me and winks; I smile in return, feeling the deep swell of happiness that comes from seeing an old friend.

“I thought I’d be slowing down by now,” George tells me, removing his gray Resitol and wiping the sweat from his broad, sun-freckled forehead, “but I haven’t. I’m busier than ever.” It’s nice to know things haven’t changed. I met George 14 years ago when my husband and I left New York City to cook at a guest ranch a few miles down the road. For four years, we swapped stories over coffee in the morning and cold longnecks on most evenings. Dragging a trail of caliche dust, his pick-up and red horse trailer became as predictable as the goats escaping the pasture and feasting on the front lawn.

George taught us how to identify agarita and wild persimmon, how to harvest prickly pear, and to never, ever, walk between a momma feral hog and her babies. George served as a trail guide for our guests, and the memory of him sitting sideways in the saddle, smoking a cigarette and charming guests with tall tales, makes me smile even today.

We’d lucked into the perfect mentor for our new life in Texas. George was born and raised in the Frio Canyon, and his roots go way back. His grandfather left Germany when he was 21 and eventually landed a position running sheep at a ranch in Kerrville, where he married and had children. The family moved to the land that’s now Garner State Park when George’s father was young. George tells me that going to dances in the park pavilion each summer beneath a sky full of stars were some of the “happiest times in my life.”

Over the years, George would leave the area and return several times before settling down for good. He opened Elm Creek Stables 18 years ago. “I’ve been to a lot of places, and none of them are prettier than this,” he says, motioning to the soft slope of hills that shapes the horizon.

In addition to his horses, there are plenty of other hungry mouths to feed. With a gentle nature that can soothe a frightened fawn, George’s wife, Beverly, has taken in an endless stream of abandoned animals, including baby goats, a blind deer, a miniature horse, a Shetland pony, a pot-bellied pig, and a peahen. The spoiled menagerie has become a petting zoo for visitors, who often hang out here before and after their horseback rides into the hills.

“We have people who came as kids who are returning with their kids,” George tells me. There are two trails for riders to choose from. The lower “family trail” has gentle inclines that can accommodate “doubles” (a parent and child age two to five); this ride lasts about an hour and meanders past mountain laurel, cedar, Spanish oak, and live oaks. The “high trail” offers spectacular views of the Frio River canyon and is so inspiring that some visitors have proposed marriage up there. “Riders have climbed off their horses, gone down on one knee, and pulled out a diamond and a bottle of wine,” says Beverly.

Although the cowboy setting is legit, the experience in the saddle is an easy amble; riders stay on the trail in single file, mostly for the safety of other riders. “Most of our riders are inexperienced,” Beverly says, “So our horses have been trained to stay on the trail. If one started to gallop, the others might follow.”

At the end of the trail, there’s a gift shop selling stuffed animals, plaques with cowboy slogans, and gifts made by local craftsmen, including such necessities as whiskey bottles repurposed as night lights.

In addition to creating memories for families that descend upon the Frio each summer, the Streibs are also doing their part to preserve what makes the area special. Like most horse operations across the state, Elm Creek endured drought over the last several years. While the Streibs were able to sustain their horses on supplemental feed, other owners resorted to releasing their animals to survive on their own. Beverly created the Frio Canyon Horse Rescue in 2014, and soon they started taking in neglected or abused horses and rehabilitating them for future adoption. Currently the program supports 30 horses and offers visitors several ways to interact with them: Not only can you groom some of the tamer animals, but you can also sponsor a specific horse and receive a picture and updates about its progress.

They’re also working to honor their family’s history. When the Rio Frio church was put up for sale last year, George, his brother Willis, and a group of local investors purchased it and turned it into a community center for local events. “Our grandparents helped build the church in 1915, and my parents were married there,” Willis says. “We didn’t want it bulldozed and turned into a vacation home.”

George says that the biggest change in the area has been the shift from ranching to tourism. “Very few people are running sheep and goats these days,” he says. Luckily for visitors who crave a connection to the area’s history, it’s still possible to stop at Elm Creek Stables and ride a horse through the natural landscape. That’s a simple pleasure that changes little with the times.