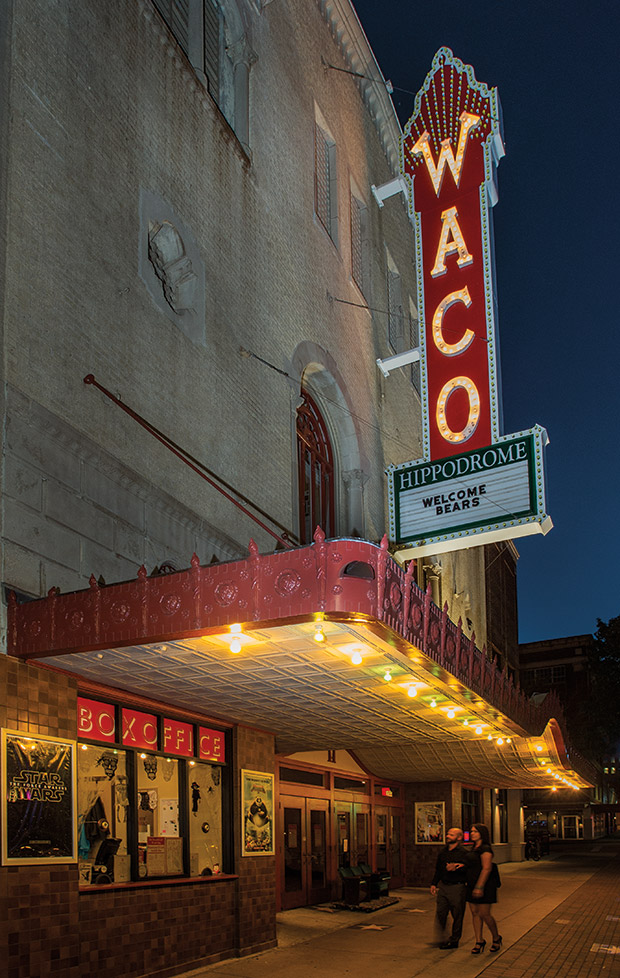 There’s a new sense of energy and possibility on the streets of downtown Waco—not a boom, exactly, but a steady drumbeat led by some determined entrepreneurs whose vision of the future is infused with an affectionate regard for the city’s past.

Taking in the city’s small downtown on a recent visit, I got the sense that it’s both reinventing itself and staying true to its roots.

Up and down Austin Avenue, Waco’s main street, long-abandoned brick buildings have come back to life as hip cocktail bars, art galleries, and live music venues.

“Twenty years ago, you did not come to downtown,” says Casey Turner, an outgoing fourth-generation Wacoan with a slight Texas twang. Casey, along with her husband Cody Turner and brother-in-law Shane Turner, has played a major role in changing that, by renovating and reopening the century-old Spanish Revival-style Hippodrome Theatre at 724 Austin Avenue. The theater is at the literal and figurative heart of downtown Waco’s revival.

Built in 1914 as a vaudeville house, the theater has seen its fair share of ups and downs. Opening night featured a live seal act; a half-century later, Elvis Presley graced The Hippodrome. Some accounts claim that Presley performed, others that he watched a movie.

Those were some of the highlights. Other moments weren’t as grand. In 1928, a projection booth fire destroyed the front of the building, and a tornado in 1953 blew straight through Waco’s then-thriving downtown. Casey puts it this way: “There were a lot of openings and closings.” When the Turners reopened the Hippodrome in late 2014, it had been empty for almost five years.

Old buildings are Cody and Shane Turner’s thing. Born in nearby Groesbeck and both graduates of Baylor University, the brothers have been buying and converting old buildings into luxury lofts up and down Austin Avenue since 2006. Buying The Hippodrome Theatre in 2012 to bring entertainment back downtown seemed like an obvious next project.

After a 30-month renovation, the Hippodrome marquee lights were illuminated once again in 2014, its centennial year. So much goes on at the theater—including live music, comedy shows, first-run movies with dinner and drinks service, and Alamo Drafthouse–hosted sing-a-longs—that Cody jokingly calls it “an entertainment mall.”

There’s also more space at the theater than ever before. By installing a retractable screen and movable sides that can seal the balcony off from the orchestra level of the theater, the Turners created a second theater space. These days, the theater can show two first-run movies in separate theaters one night, then reopen the space for a big musical act the next night.

Walking through the lobby across red and gold carpet that was salvaged from the Hippodrome of the 1980s, Casey explains what’s old and new.  A lot stayed—the dark walls date to the 1980s, and vintage movie posters and photographs from the theater’s past incarnations hang on the walls. There are even relics from another old Waco theater, the long-gone Orpheum, including the long, red awning that hangs prominently out front. Even relics like a 1950s movie-reel autowinder find their place in the new Hippodrome in the small downstairs museum space.

One of the best parts of the newly reopened Hippodrome is this balance between old and new. On the second level, in the Bar and Lounge, whiskey flows to a soundtrack of 1920s show tunes. Having a pre- or post-show drink there feels charmingly old fashioned, and tends to encourage lively conversations about what’s screening downstairs. Adjacent to the theater, a stage anchors a green space that used to be a city park. “We’ve got a digital projector out here, and we show movies at night, often free family movies,” says Casey. “We wanted to give people a place to play.”

That sentiment has been contagious. “Everything here is new,” says Casey, gesturing up and down Austin Avenue. There’s even a guy, she says, “who sells hotdogs from a cart—it reminds me of New York!”

Food trucks have been popping up, including an Asian-fusion truck named “Club Sandwich” where you can get a delicious “trashbowl rice” dish of Thai-style sticky rice, tangy lemongrass pork, and shredded carrots. If a proper table is more your style, Portofino’s, a no-frills Italian joint across from the theater, serves up classic dishes like creamy chicken Alfredo and meat lasagna on tables spread with plastic tablecloths.

Down the street from the Hippodrome at Dichotomy Coffee & Spirits, a clean, minimalistic esthetic lights up a narrow room flanked by a long bar. Exposed interior brickwork helps create a warm, easygoing vibe, but don’t be fooled—the baristas and bartenders are serious about their craft. During the daytime, baristas carefully create iced coffees and other caffeinated treats, and at night, you may want to return for a classic craft cocktail. Whatever time of day you visit, make sure to bring your beverage upstairs to the roof for a panoramic view of the city. To the right is Waco’s ALICO building—one of the first skyscrapers in Texas—and straight ahead, you’ll have a clear view of the 1901 McLennan County Courthouse.

“Things are definitely getting a lot cooler down here,” says Casey.