Home’s where the Hearth is

Gather around a fire this holiday season 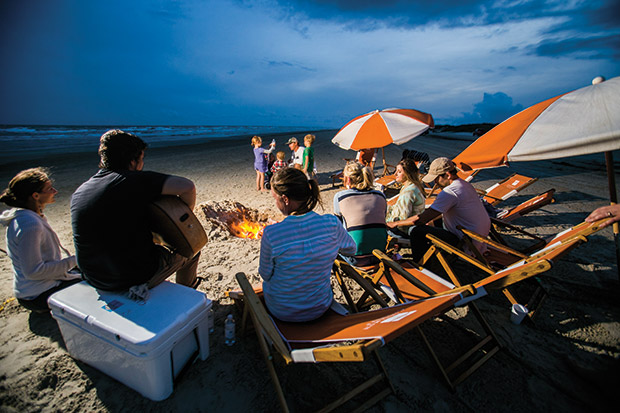 Although we live in the very modern 21st Century, most people still retain some 19th-Century traits. Among them, consider our Charles Dickens-like fondness for seasonal celebrations around blazing fireplaces, whether they resemble Tiny Tim’s humble inglenook alongside the Cratchit family hearthstone or the fires roaring in Mr. Fezziwig’s office, transformed into a festive dancehall by holly and tinsel.

Taking a moment to enjoy a fire’s cordial glow often ends up warming our hearts as readily as our hands. Perhaps we need fireplace moments now more than ever before, as the rising tide of our busy, noisy lives whittles thin the time once spent watching embers glow and sharing stories among friends.

In the spirit of the season, we offer the following guide to welcoming hearths around the state. Some of these flames will already be burning bright when you arrive, while a few others might require you to ignite your own. Wherever you end up fireside this season, don’t forget the hot apple cider, a platter of fresh-from-the-oven gingerbread, and plenty of old-fashioned good cheer.

The Goodnight Cabin inhabits a ledge high above Palo Duro Canyon, one of the state’s most scenic natural wonders. Rancher Charles Goodnight drove more than a thousand head of cattle into this canyon in 1876, laying claim to rangeland that would come to span more than a million Panhandle acres. Now a state park, Palo Duro Canyon attracts campers and hikers who wish to explore its red rock formations, including the giant pinnacle known as “The Lighthouse.”

Civilian Conservation Corps workers built the Goodnight Cabin (along with the park’s six other cabins) during the 1930s with native Trujillo sandstone and Rocky Mountain juniper wood, adding handmade furniture and decorative metal hardware details that enhance the interior.

The Goodnight Cabin features its own fireplace (bring your own firewood) and a sweeping view of Palo Duro, considered the “Grand Canyon of Texas.” The canyon stretches across the Panhandle landscape for 120 miles and reaches depths of 800 feet, making it the second-largest canyon in the country. Brilliant red claystone, yellow and purple mudstone, and bright white gypsum reflect the sunset colors often seen from the cabin’s doorway. Call 806/488-2227.

Country resorts and campgrounds aren’t the only places you’ll find a warm seat fireside. Consider the NYLO Dallas South Side, a luxury hotel that introduces Texans to a little bit of Manhattan and a whole lot
of style. The NYLO South Side features comfortable accommodations in loft-like, spacious rooms surrounded by a collection of local artworks, and a sixth-floor outdoor terrace with an infinity pool and a custom-designed firepit. Warm up around the fire with a beverage from the rooftop SODA Bar, and soak in the sparkling views of Dallas’ ever-evolving skyline.

NYLO comes to Texas courtesy of a team of hotel veterans committed to green initiatives like energy efficiency, waste reduction, biodegradables, and recycled products. In fact, the NYLO South Side occupies a historic building that originally opened in 1911 as the home of the Dallas Coffin Company. Developers used granite cladding stripped from the ground level during the restoration to create the rooftop firepit.

Awarded a Leadership in Energy and Environmental Design (LEED) Gold certification from the U.S. Green Building Council, the NYLO Dallas South Side adds a new spin on the term “evergreen.” Call 214/421-1080.

The developers of Cinnamon Shore set out to create an idealized seaside village when they built the 60-acre community on Mustang Island, just down the road from Port Aransas. Naturally then, bonfires on the beach are a picturesque complement to the Gulf Coast shoreline during winter months. Made up of residences and vacation rentals set on a 300-foot boardwalk and pedestrian-friendly, palm-lined streets,
Cinnamon Shore offers activities including sandcastle lessons; surf lessons; yoga on the beach; two stocked fishing lakes; and a Town Center with a restaurant, entertainment stage, and outdoor movie screenings.

Cap your day of beach fun with a mesmerizing beach bonfire; contact the concierge service for supplies, including s’mores kits. Cinnamon Shore also schedules a year-round lineup of events and festivals, many of which include bonfires on the beach or at the Great Lawn event grounds. Upcoming events include a Thanksgiving break celebration, a Christmas gathering, the annual Stomp Winter Festival, and the annual Fall Fest and Tour of Homes. Call for dates. 361/749-0422.

A warm blaze on a brisk, East Texas night awaits the outdoors enthusiast who believes in the power of a campfire under the pines. Tyler State Park, located in the Piney Woods alongside a 64-acre, spring-fed lake, offers campers the opportunity to set up a tent or park an RV, and then use their campsite fire ring to light up the night. (Check with park rangers regarding any burn bans in effect.) Bring your own wood
or pick up some from the park headquarters for a donation.

Tyler State Park, located about 90 minutes east of Dallas, features the distinct mark of the Civilian Conservation Corps, the Roosevelt-designed back-to-work program of the 1930s and ’40s. Between 1935 and 1941, CCC workers built the earthen dam that created the park’s lake, a bathhouse, roads, a concessions building, the dance pavilion, a boathouse, and a caretaker’s residence.

Holiday campers are invited to participate in the park’s annual Pineywoods Christmas, taking place 7 p.m. to 10 p.m. December 12. Park headquarters and the park store offer seasonal refreshments and shopping while campers along the park’s three main camping loops decorate their sites for a “tour of lights.” Campers can share campfire warmth with visitors along the festive campsite loops. Call 903/597-5338. 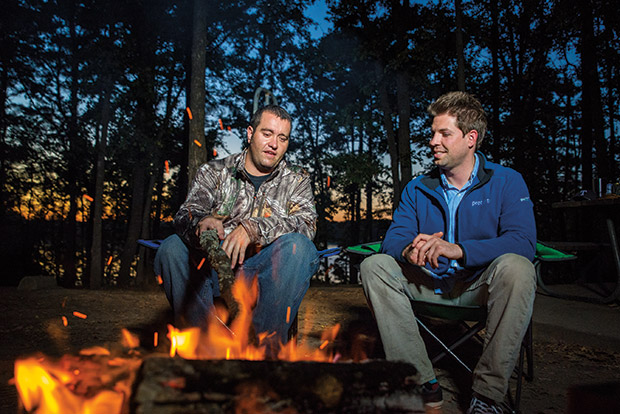 This season marks the 51st anniversary of Austin’s Trail of Lights, a Zilker Park tradition featuring displays lit by thousands of strands of multicolored bulbs, elaborate illuminated scenes of cartoon and seasonal characters, and live performances by local talent. At its heart you’ll find the Yule Log, the festive firepit designed to warm revelers all evening long.

Introduced during the festival’s first year in 1965, the Yule Log was discontinued for several years because of burn bans and the installation of the park’s irrigation system. But the massive firepit returned in 2014, and this year you’ll find the Yule Log burning safely in the park’s sand volleyball court, fed by wood collected from Austin parks over the previous year.

Nearby, the Zilker Tree, a festival tradition that began in 1967, stands 155 feet high and is one of the tallest human-made Christmas trees in the country.
Constructed using the park’s “Moonlight Tower,” the Zilker Tree features more than 3,000 lights. The entire twinkling scene can be viewed from the festival’s Ferris wheel, an amusement introduced last year.

The Trail of Lights runs December 8-22 this year, with a 2.1-mile Fun Run scheduled for the evening of December 4.

As the easternmost gateway to the Big Bend, Marathon hosts one of the state’s more impressive locations to warm up your soles (and your soul) courtesy of the historic Gage Hotel. The 1927 hotel offers a relaxing environment of landscaped gardens and courtyards, a pool and spa, and Western-themed rooms.

In wintertime, the fireplace in the Gage’s eclectic lobby serves as a hot spot for sharing a morning coffee or a nightcap. In fact, complementing the high desert chill just happens to be a Gage Hotel specialty. In addition to the lobby, you’ll want to spend time at the blazing Dance Court firepit; at the firepit in the 27-acre Gage Gardens; and by the intimate kiva fireplace that warms the television room next to the lobby.

You could also go for margaritas in the White Buffalo Bar, where the warmth of the hearthstone and limited elbow room make friends out of strangers after just one round. Next door at the 12 Gage Restaurant, the dining menu includes steaks and wild game specialties. Sit inside or join friends on the 12 Gage patio, tented and warmed with patio heaters and supplemented by rock and adobe fireplaces along the courtyard walls.

Guests often use the Gage Hotel as a base for exploring the rest of the Big Bend region, but the winter ambience is so seductive that you may find an entire weekend has passed without ever having left the grounds. Call 800/884-4243.

Located in north-central Texas in Somerville, Erath, and Bosque counties, Rough Creek Lodge and Resort keeps guests toasty all winter long with an enormous, stone-clad fireplace in the dining room and outdoor firepits. The fireside warmth provides a comforting backdrop for gathering with friends after partaking in various activities across the 11,000-acre resort, from horseback riding to sporting-clay courses, game hunting, and spa treatments.

Complete your meal with a plate of s’mores toasted over the restaurant terrace firepit, set ablaze each evening by the staff. You’ll also find a massive fire ring, lit by request, along the shores of the resort’s
Mallard Lake, with plenty of comfortable seating. (Reserve your Lakeside S’mores Kit at check-in.) Enjoy the royal treatment. Just don’t lose your head. Call 254/965-3700.

Chinati Hot Springs, located west of the Big Bend town of Presidio, defines the phrase “remote getaway” in its most dramatic sense. Don’t let the gravel dust and the stark desert vistas deter you. The landscape may appear vast and wild, but you’re headed to a cozy oasis.

Chinati Hot Springs, nestled above the banks of Hot Springs Creek, offers natural hot and cold pools, cabins and rooms, overnight camping, and a communal kitchen for preparing your own meals. Resident caretakers Dianna and Dan Burbach have also constructed a large fire ring on the grounds with cool nights and toasting marshmallows in mind.

Chinati Hot Springs opened to the public in 1937, but the first known resident of the springs was J.J. Lee, a miner who sought relief for his arthritis in the 1910s. Lee spent much of his time soaking in the springs’ warm water, something that present-day guests may enjoy in several private tubs as well as an outdoor, hand-constructed pool of native rock.

Just beyond the pool, the fire ring makes building a small bonfire a natural choice for chilly nights. Or bring your own portable firepit and wood, a sure guarantee that you and your friends will stay warm—whether you’re wet or dry—all evening long. Call 432/229-4165.