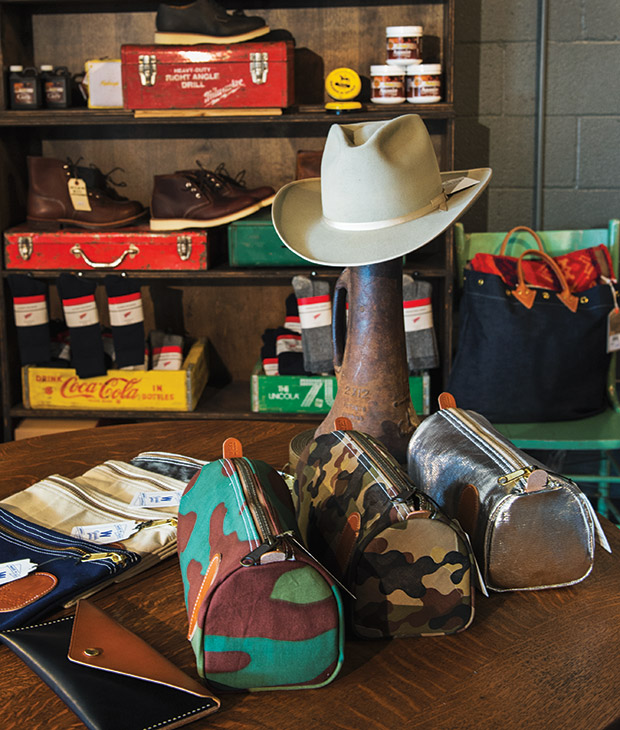 I do a lot of traveling and have developed a system over the years. I keep a kit packed with toiletries, a backpack stocked with such essentials as binoculars and sunscreen, and I carry my passport and emergency-contact information in a small case. All I have to do is toss these into the car or a suitcase whenever the travel opportunity arises.

However, I remain on the lookout for improvements to my system. On a recent trip to Fort Worth, I stumbled onto the traveler’s heaven known as W Durable Goods, which offers attractive dopp kits, train cases, duffle bags, and other travel necessities, all hand-made on the premises. I immediately snagged a black canvas dopp kit for $60.

W Durable Goods sprang from founder Daniel Wright’s need for a good, basic zipper bag back in 2004. He had already taught himself to sew, so he tried his hand at making his own.

“I needed a hobby, and everybody needs something to keep their stuff in,” he says. “First I made a plain old zipper bag, then I challenged myself to do more complicated things.” After he broke two home sewing machines, Wright bought a used heavy-duty German machine in 2005. That widened the possibilities of what he could stitch together.

“I am 100 percent self-taught, and it was an eight-year learning journey. I made a lot of mistakes. Sewing round pieces together proved pretty tricky, figuring out the mechanics of how to make it come out right. If something isn’t perfect, it makes my eye twitch. Pretty much no one saw the stuff I made for about the first three years,” he admits. Function was important; Wright wanted to make utilitarian, handy products. But he also paid attention to looks. “A bag needs to be complete in thought, proportion, and design. You won’t be proud to carry something if it isn’t just right.”

He began selling some of his pieces on the Etsy website in 2008, and people started asking him to make other things. Those customer requests got him into trouble sometimes, but also challenged him to do things he didn’t think he could. “A zipper bag is pretty simple, but it’s good to push yourself. You drop what you don’t like and keep what you do.”

In March 2014, Wright opened a shop near the Fort Worth Stockyards, then in fall of 2015, he moved to a 1950s warehouse in the city’s trendy West 7th area. He now has two full-time employees, two part-timers, and seven sewing machines. “It’s impossible to do it all myself, but I touch everything we make at least once in some step of the process.”

Wright sources his canvas from a textile mill in New Jersey that has been in business for almost 100 years. Leather comes from a tannery in Pennsylvania, one of the last few still operating in North America, he says. He uses solid brass and steel hardware and top-quality zippers.

A fan of one-of-a-kind pieces, Wright makes some of his products from vintage mailbags and military goods. “Our ‘Model A’ briefcase is made from really heavy canvas from 1950s transport bags used by Army Corps of Engineers personnel who were building portable Bailey bridges. We use aluminized Kevlar fabric rendered from military-issue fire entry suits to make dopp kits and accessory bags. I try to source vintage material and unique new materials.”

My dopp kit has a solid feel and looks like it would be at home among the gear of cowboys who traveled days by horseback to the Fort Worth Stockyards a hundred years ago. The area where Wright opened his first storefront was once a stop on the famous Chisholm Trail; it eventually became a center for ranching, cattle-shipping, and meatpacking. In 1904, in fact, Fort Worth ranked fifth among United States livestock markets, behind Chicago, Kansas City, Omaha, and St. Louis. Now a National Historic District, the Stockyards offer up tastes of that history through activities such as twice-daily cattle drives, horseback rides, a weekly rodeo, and the Texas Cowboy Hall of Fame.

The new location expands the shop’s customer base. The West 7th district encompasses five pedestrian-friendly blocks between downtown and the cultural district, an area rich in restaurants, bars, boutiques, and live-music venues. “Our stuff appeals to people who want something unique and well-made,” Wright says. “Here, a real mix of customers comes in, hipsters, tourists, bikers, everybody.”

Wright tells me that his personal travel system includes one of the dopp kits and several zipper bags: one for phone chargers, another for toiletries, and a third for coffee utensils.

“My zipper bag is the most handy thing in the world,” he says. “I get a lot of great feedback on it. It is a good size, which makes it the most multipurpose bag I have. People often tell me what they use it to carry, and it is everything from tools to makeup.”

A zipper bag (or two) might be a good choice for your next Fort Worth souvenir, too.