Inside These Walls: A Personal Reflection on the Alamo

"When I step inside the mission, after being reminded several times that "This is a shrine," my first thought is that it was indeed a church – and still looks and feels like one." 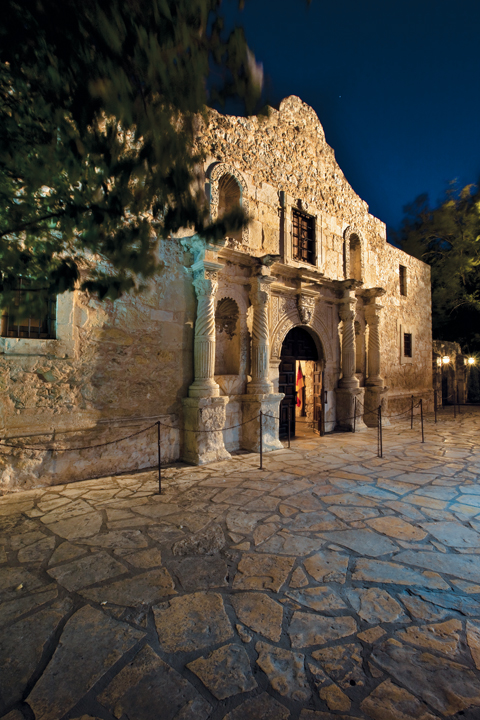 The landmark arched-gable façade of Texas’ famous mission was introduced during restoration in the 1850s. (Photo by J. Griffis Smith)

The hump-backed façade of the Alamo, the 18th-Century mission chapel that actually comprised just a small part of the fabled killing field of 1836, is the profile and shrine of Texas. U.S. Army engineers introduced the distinctive arched gable while restoring the structure in the early 1850s. But that roofline symbolizes Texans’ tradition of valor, pride, and independence. My dad attended a Wichita Falls grade school that was built to resemble and remember the Alamo, and children still go there. Another Alamo-look-alike school is closed and fallen almost to ruin in the hamlet of Mosheim; doubtless more of these relics are scattered throughout the state. That’s because our legislature in the 1920s freed up some school-building revenue contingent on architects and brick masons aping the Alamo’s silhouette.

I’m reminded of this when I take advantage of an Interstate 35 rest stop a few miles north of San Antonio. On a wall inside the facilities I encounter a large tile mosaic of the Alamo. As I continue the drive, brown signs sporting a single-line graphic of the iconic Alamo façade remind me to exit I-35 and curve around downtown on I-37. Seemingly inspired by some architect’s notion of a spaceship, HemisFair Park’s Tower of the Americas forever pops up around me with the happenstance of the moon. The Alamo is the only one of San Antonio’s treasures that’s easy for me to find. Often, I get so lost here, and I believe it’s because so many of the city’s streets were laid out for traffic of horse carriages and donkey carts, not automobiles. But the Alamo stands just a few blocks from the freeway exit.

I choose a parking lot, realize I’ve still gotten a bit turned around, and follow street-corner signs pointing the way. In 1836, squat adobes and dirt streets nestled within this bend of the San Antonio River. Upon losing an election on who would command the defenders, Jim Bowie went on a drunken rampage, declaring martial law, freeing prisoners of the town jail, and looting what he wished to carry off. I’m struck now by the large number of storefronts with “For Lease” signs posted in the windows. Above street level I see windows that have been left broken out and some walls defaced by graffiti. One place in particular gives me pause: barred shut and heavily padlocked, the onetime curio shop still has the sign “Echoes of the Past.”

“OK, first, how’s the breeze blowin’ for goin’ in there with some troops and blasting them out?”

I don’t mention these indications of the area’s decline to be catty about a city I love. But the municipality owns these blocks, and part of the Alamo’s history now lies buried under the rubble of a thousand jackhammers. Badly spooked by a Comanche massacre of priests and soldiers at San Saba in 1758, Spaniards put up walls around the compound that were eight feel tall and two feet thick. They’re all gone now. A federal building (former post office) erases the spot on the north wall where Mexican commanders thought they had the best chance to breach the fortress. The headquarters rampart on the north wall is where William B. Travis ducked musket balls, shouted orders, and was killed. Along the Alamo’s west wall, sidewalk hawkers now yell at tourists to come inside the Guinness World Records Museum and Ripley’s Believe It or Not! and Louis Tussaud’s Plaza Wax Museum. After the ferocious battle ended, the Mexican troops burned the vast pile of bodies under what is now the Rivercenter Mall. Just over a century ago the Daughters of the Republic of Texas and the philanthropist Clara Driscoll joined forces to save the old Mission San Antonio de Valero and the roofless ruin of the convento, or priests’ residence, that became known as the Long Barracks. The rebels’ most withering fire on the Mexicans and desperate hand-to-hand fighting took place inside the barracks, not the chapel.

But the collective rite of remembering the Alamo could not be content with preservation of these few remaining structures. A live oak that was already forty years old when it was transplanted in 1912 still sprawls with great presence in the courtyard. With federal monetary assistance, the Texas Centennial Commission in 1936 enlisted a prolific Italian-born sculptor, Pompeo Coppini, to conceive and execute on Alamo Plaza a cenotaph (an honorary tomb for people whose remains lie elsewhere) called The Spirit of Sacrifice. Finished in 1939, it’s a 60-foot-tall spire of gray marble that shines very white on a sunny day and rests on a base of pink granite, with a lineup of eight Texas heroes of the battle sculpted into the marble’s low relief. The traditionalist author J. Frank Dobie despised the Cenotaph, remarking with characteristic sourness that it looked like a grain elevator. I stand before it and watch a woman who’s innocent of the seven decades of controversy. She walks up to the historical marker with a child’s teddy bear and sets the toy on the ledge precisely between the boots of Travis and Crockett, then records the image with her cell phone’s camera. 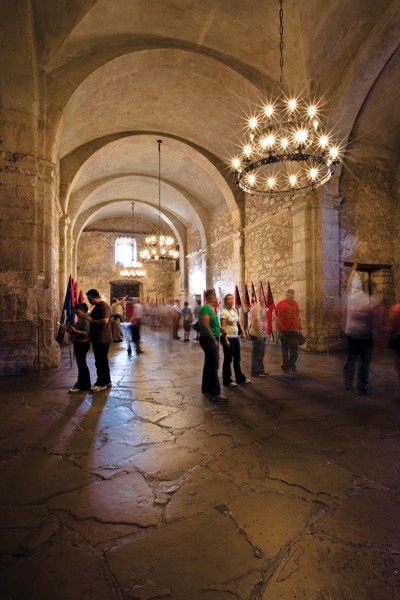 To this day, the Alamo remains one of Texas’ most cheristed and visited sites. (Photo by J. Griffis Smith)

Peril lies in making any sleight of the Alamo, at least in Texas. Ask Jim Lehrer, the sage of PBS television news and moderator of presidential debates. In 1966 Lehrer was a jaunty Dallas newspaper reporter who had just published a first novel called Viva Max! Three years later, Lehrer’s book inspired a funny movie starring Peter Ustinov; he was cast as a Mexican general named Maximilian who takes advantage of a neighborly invitation to a Fourth of July event and occupies the Alamo, reclaiming it for Mexico. Jonathan Winters was equally inspired as the general of the Texas National Guard. Few Daughters of the Republic of Texas were amused; requests to shoot some scenes on the Alamo grounds were huffily turned down. Erased from the film adaptation was Lehrer’s character The Chief, an irreverent portrayal of then-President Lyndon Johnson. The Chief calls together his Secretary of State and national defense team and bangs a pencil on his desk, taking no prisoners.

“Now, my friends, we’re goin’ to sit here and reason together on this thing until we figure out a way of getting that funny little fella out of The Alamo. Any of you boys got any suggestions—for starters?”

Nobody had any. Silence prevailed.

“OK, first, how’s the breeze blowin’ for goin’ in there with some troops and blasting them out?”

Lest our reverence for the Alamo take on harsh tones of jingoism, it’s useful to remember that Mexico has its own cenotaph honoring fighters who made the ultimate sacrifice trying to defend their homeland. The Monument to the Heroic Cadets is an impressive sculpture of torches that stands in front of Chapultepec Castle in Mexico City. In 1848, in the conflict we Americans call the Mexican War, Mexican cadets who’d been pressed into the conflict made a last stand and then jumped to their deaths rather than surrender to U.S. Marines. I was a tourist in the fascinating castle once when something made me look up. Artfully painted across an interior dome was an image of a wildly staring falling boy wrapped in a Mexican flag. I flinched and cupped my hands, as I had in my boyhood’s hapless attempts to field punts on a football practice field.

Admission to our counterpart Alamo is free. Chiseled in a plaque that I read as I approach the mission is an excerpt from the famous letter Travis wrote ten days before his last sunrise.

To The People of Texas & All Americans In the World—

I am besieged, by a thousand or more of the Mexicans and Santa Anna—I have sustained a continual bombardment & cannonade for 24 hours & have not lost a man—The enemy has demanded a surrender at discretion, otherwise, the garrison are to be put to the sword, if the fort is taken—I have answered the demand with a cannon shot, & our flag still waves proudly from the walls—I shall never surrender or retreat. Then, I call on you in the name of Liberty, of patriotism, & everything dear to the American character to come to our aid, with all dispatch—The enemy is receiving reinforcements daily and will no doubt increase to three or four thousand in four or five days. If this call is neglected, I am determined to sustain myself as long as possible & die like a soldier who never forgets what is due to his own honor & that of his country—

Uncommon valor, absolutely, (though Travis’s line drawn by sword in the sand is discounted by historians as a myth). But my eyes return to the terror in the lines “come to our aid, with all dispatch … If this call is neglected …” He was shaken to the depths of his soul by the fix he was in. The man was 28 years old.

Before leaving I wander over to the gift shop, and look at a display case detailing the evolution of the Bowie knife and Bowie’s murderous “Sand Bar Fight,” and hold back a smile at all the mementos that have been marked down. Etched Alamo ornament—was $13.50, now $8.99. Alamo crackers, $1.75; a recipe for Texas guacamole, 50 cents. But when I step inside the mission, reminded several times by politely murmuring men amid a crowd of school kids in red T-shirts that “This is a shrine,” my first thought is that it was indeed a church—still looks and feels like one. Then comes a claustrophobic sinking spell and reflection of how terrifying it would have been to be trapped in black-powder smoke inside these thick windowless walls, shuddering with each thump of the Mexican cannon. Officers under Santa Anna were astonished that he ordered the assault into the Texans’ own blasts of cannon instead of waiting for them to run out of food and water and surrender. The old sacristy, a tiny room on the left as you shuffle through, is where you can best fathom the awfulness and strange dignity of the fall of the Alamo. Women, small children, and a few black slaves were locked up in the room, the only enclosure in the compound that has remained as it was. Until the ninety-minute assault ended, about 8:00 in the morning, the survivors couldn’t see the terrible cost to both sides. But how they must have prayed and wished they couldn’t hear.